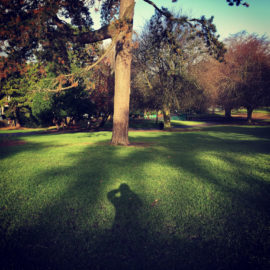 I am a PhD candidate in the Photography Department at the University of Plymouth and receive research funding from the University of Plymouth and The 3d3 Center for Doctoral Training Programme. The focus of my practice research is on ‘Photography and its Contribution to the Understanding of Digital Porosity’. I exhibit widely, both nationally and internationally and have undertaken various residencies f.e. in New York, Rome or Victoria Baths in Manchester. To date, I have been awarded two major fellowships (Arts Council Austria, City of Bremen), the Prize for Visual Art of Upper Austria, and a Research Fellowship at Southampton Institute. website: www.claudiapilsl.com blog: https://loosespace.wordpress.com/ instagram: in_search_of_place Bristol

As the readers of this blog my remember, beginning of 2018 I undertook a 3 months residency at x-church in Gainsborough. My proposition to the community was to explore the question What does it mean to be a resident? For this […]

You might remember that mid of March was the inaugural show at Chateau Marcus which took place in conjunction with the second Salon Slum. Simply put both events were absolutely exciting as everybody really engaged and nobody came just for […]

All of this week I spent on generating a rough first cut of my moving image piece. To be precise, I worked most of the time on the audio edit endlessly re-listening to my collection of interviews. Over the last […]

Tomorrow, Friday 16th March, something exciting yet also bewildering will happen  at x-church. At least for the shed. Yes, shed life is not necessarily easy and clearly defined at x-church and other sheds, if they could, would think that what […]

How I go about doing things as part of my residency does not go unnoticed and people at x-church seem to reflect and talk about it. This is good, yet also slightly worrying as everybody at x-church might understand better […]

Mapping seems to become more and more a core theme in what I do in this residency. Yet in many ways, the activities that I initiate and what I do myself does not seem to produce or involve a map […]

At my latest stay as a guest-resident at x-church Marcus Hammond and I organised a small gathering for artists. I imagined it to be something equivalent to a jam session in music. Not that I ever participated in one. But […]

Octavia, a member of the writing group at x-church, prompted me to join in somehow. The word she gave me was ‘everyday’. At the time, it was Saturday afternoon, I was in the thick of it, meaning I was […]

There are many intriguing maps around that don’t involve mind or altitude. There are the ones believed to have been made by people living in the stone age, there are socio-geographic maps acknowledging the traces left by different groups through […]

I have always pretended that there is not much to how I take photographs hiding behind the Kodak motto ‘you press the button, we do the rest’. I would have said that I take most images singlehanded and this indeed […]

Last Thursday was the beginning of my residency with x-church and more or less the first thing that happened was that Marcus Hammond and his helper Lee installed a rope for the children’s project. I should add that every Thursday […]

I did the last bit of research in St.Margaret’s in March and this was done with a rather stinking cold and I fear that I did not only collect information but also was passing on more than a fair share […]