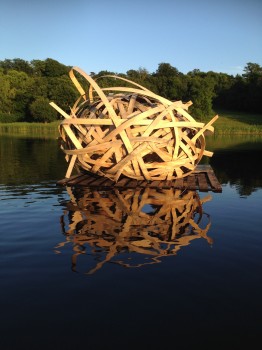 I play with the idea that a line can be a physical object and also a train of thought. I work intuitively in site specific locations. I am currently learning basketry skills at CityLit to develop my practice. Shortlisted for the Jerwood Drawing Prize 2012. Bexhill

the last term on our course covered plaiting, none of us had realised just how much you can hate cutting up strips of bockingford paper into straight 1.5cm lengths but that is exactly how we started, so it could only […]

‘working with a new material’  sounds obvious doesn’t it?  Every time I tackle a new material I think, ‘this is going to be a creative adventure, and I’m excited’ – what I forget is the strange one step forwards two […]

Who would have thought a cane module of 6 weeks – our brief : ‘from the air’ – could be an emotional rollercoaster…perhaps sky diving is a better analogy! It was the term up to Christmas so rammed with other […]

Design is an integral part of the basketry course and our design tutor Louise Baldwin (a textile artist) has expertly led us through basic development stages from mark making through to planning of final projects. Louise is very good at […]

Immortalizing the sculpture – death is part of life. The humanity of ‘process’ – the cycle of a project starts from an ending, a death of sorts. I gave up working in the way I had been and started with […]

Below, surface and above interwoven relationships I have put up work I made on the residency at Ashburnham and am quietly chuffed if not a little surprised with the professional way I have hung it and the environment it is […]

I am now recording (with permission) conversations with friends which cover aspects of my practice that I want to research, the recordings are a not only a great way for me to revisit good ideas and thoughts but also to […]

I was so privileged to show many friends, colleagues and arts professionals my work at an event I called Resonance, we had stunning weather and it began with taking visitors out in 2 rowing boats, 4 in each boat to […]