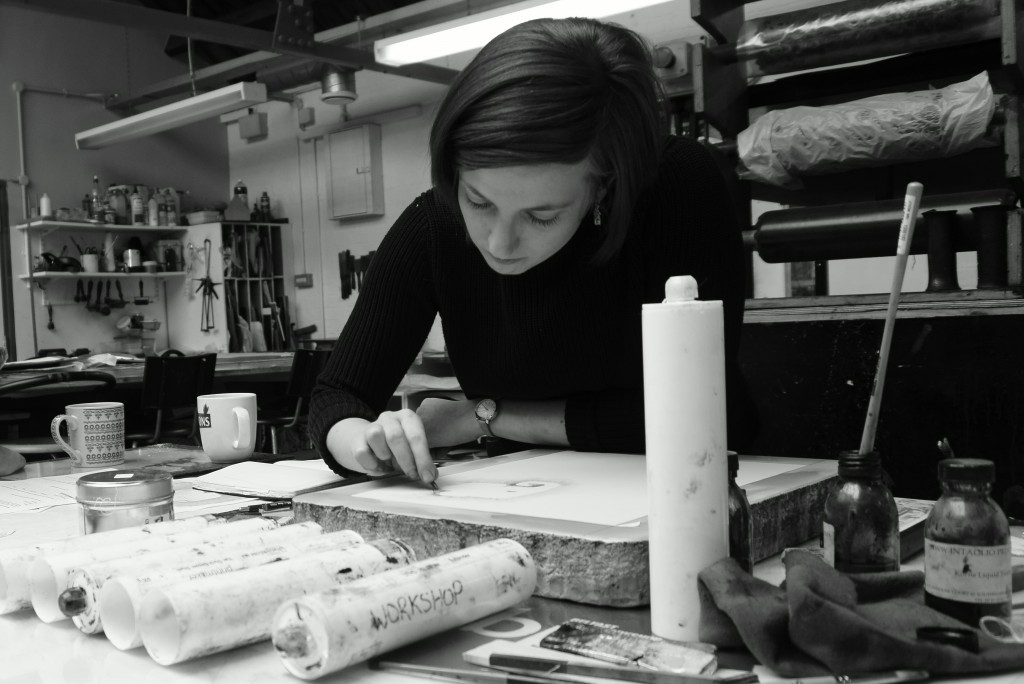 Helen graduated with a combined Diploma and BA (hons) in Fine and Applied Art (University of Ulster, 2009), receiving the Dennis Kelly Award for Drawing (ASU), the Belfast Print Workshop Student Award, Graduate selection by the Royal Ulster Academy and The John and Rachel Turner Prize. She was recognised for her printmaking practice with an award from Hamilton Architects (RUA, 2010), and studied classical anatomy through an intensive course in Kensington Palace, awarded by the Prince’s Trust. She has received SIAP funding from the Arts Council of Northern Ireland (2010-16), project support from Belfast City Council and the Lisburn Arts Advisory Committee (2013, 2015), and completed residencies with Digital Arts Studios (2014), the Tyrone Guthrie Centre (2015, 2016), and the BOOM collective in Bangor (2017). She works professionally in arts administration and project management, providing creative design, facilitation and tutoring for various arts organisations, museums and centres, theatres and education institutions. She has continued her academic practice, graduating from both the Arts and Business Manage Frontiers programme (University of Ulster, 2016), and completing a Masters in Cultural Policy and Arts Management (Queens University Belfast, 2016). She maintains an ongoing interest in research practice, serving as a Director on the Board of Trustees for the Belfast Print Workshop, and writing technical pieces for periodicals including ‘Printmaking Today.’ Most recently Helen was the recipient of the a-n professional development bursary, to train on the first ever dedicated coaching accreditation programme for visual artists, hosted by Relational Dynamics 1st in Lancaster (2017).

Narrative from the RD1st coaching accreditation programme 2017, course fees funded and attendance gratefully supported by a bursary from a-n, The Artists Information Company…