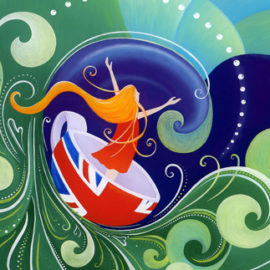 I was born in the US, grew up near Santa Cruz, California, and graduated in 1996 from Willamette University in Salem, Oregon, with a Batchelors degree in English Literature. Since then I have lived in London, Brussels, Amman, and Zagreb. I returned to the UK in 2012 with my family and now live in Burgess Hill, West Sussex. I was first introduced to reverse oil on glass painting by a Croatian Naïve artist while I was living in Zagreb in 2010. As the artist didn't speak any English, I learned to paint in oils and backwards, while taking Croatian lessons on the side. In 2011 I was invited to exhibit with the Croatian Association of Naive Artists at the Mirko Virius Gallery in Zagreb, and in 2016 I was accepted into the Association of British Naïve Artists (ABNA). Today I balance my creative practice with parenting two children (one of whom has special needs related to autism), running glass painting and Creative Carer workshops, chairing the Burgess Hill Artists group, and introducing the work of British and Croatian Naïve artists to new audiences. Sussex UK and Croatia