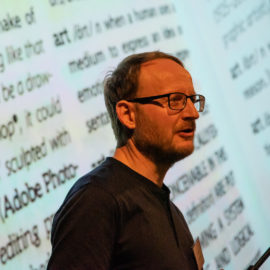 Robert Good is an artist whose work considers the frailties of language and the problems of knowledge. Deconstructing texts, systems and structures in his search for understanding, Good blends doubt with a desire for certainty that creates a fault line throughout his work. www.robertgood.co.uk Cambridge

We have come full circle as I link Gemma Marmalade back to BA Zanditon. Gemma Marmalade tells me how to tell a lie that is 62% more believable. We also discuss her project to set up a call centre in […]

What do Carl Gent and Gemma Marmalade have in common? Carl Gent is an artist from Bexhill-on-Sea, UK. His work frequently involves performances based on his researches into Cynethryth, the eighth century Queen of the Mercians and co-founder of Bexhill-on-Sea. Carl […]

Thanks to everyone who has supported this podcast so far – it has now reached 1000 plays! To celebrate this milestone there is now a special bonus episode online featuring a conversation with artist William Furlong, founder of the Audio Arts project […]

What do Craig Pinder and Carl Gent have in common? Craig Pinder is a West End actor and original cast member of Les Miserables. I want to find out from Craig about his views on acting and how acting might […]

What do Beric Livingstone and Craig Pinder have in common? Beric Livingstone was front man of indie group The Healing Fields and tells me how the realities of keeping the show on the road didn’t always match up to his […]

What do Tom Hackett and Beric Livingstone have in common? Tom Hackett is a sculptor who walks around town wheeling large yellow silicon dogs in a wheelbarrow as a pretext for holding conversations with members of the public. He tells […]

What do Jayne Good and Tom Hackett have in common? Jayne Good is a certified Bob Ross instructor who teaches beginners how to paint idealised landscapes that frequently feature mountains, trees and lakes. In our conversation Jayne tells me how […]

What do Robert Good and Jayne Good have in common? (Apart from our surname – we are not related as far as we know). I was introduced to the world of Bob Ross by a friend, and I was hooked. […]

What do Lizz Brady and me Robert Good have in common? Lizz Brady is a fanatical Everton FC supporter, going to matches whenever she can and riding the highs and lows of victory and defeat. In the context of her […]

What do Ellie Breeze and Lizz Brady have in common? On leaving Cambridge School of Art, Ellie Breeze co-founded the Motion Sickness art collective as a means of staying connected, and also to create opportunities to show work and to […]

What do Alban Low and Ellie Breeze have in common? Alban Low is a professional illustrator, working a signature calligraphic style for album covers and specialising in impromptu portraits of jazz musicians. He tells me how he has two distinct […]

What do Ahmed Farooqui and Alban Low have in common? Ahmed Farooqui told me how he turned his house over to art – creating Space36 in which he invited artists into his home not just to exhibit there, but to […]