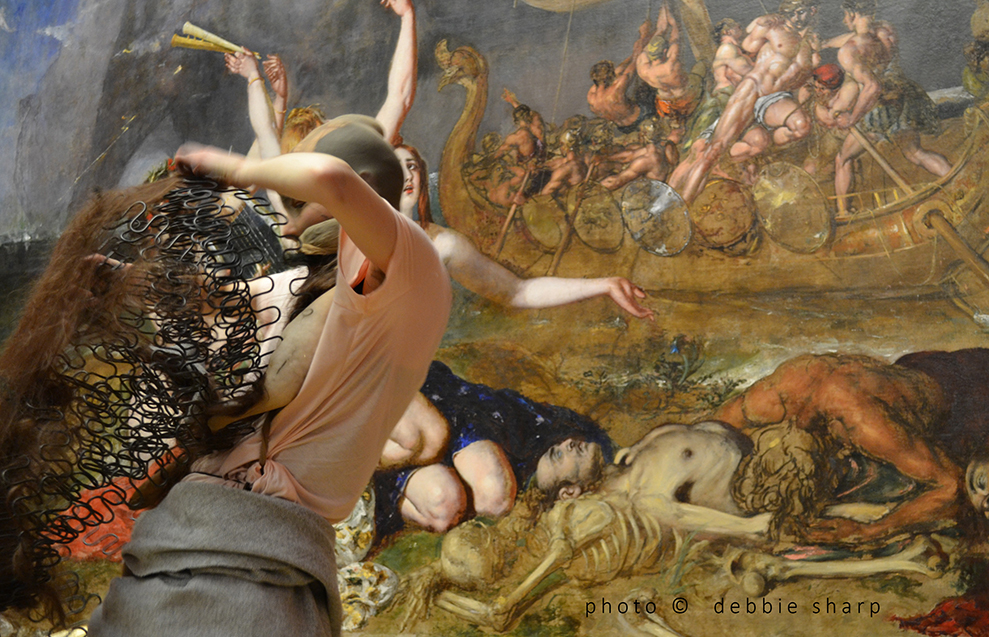 Rosanne Robertson is an artist based in Manchester from artist led studio and project space The Penthouse which she co founded. Working with performance, sculpture, assemblage and sound she explores tensions, anxieties and relationships between body, object and environment. Human psychology implicated in improvisation and assemblage underpins works anthropomorphic in appearance as an exploration into the unconscious given form. Described by Dazed and Confused when selected by Doodlebug as one of the city’s ‘Emerging Ones’ as “working beneath the skin by any means possible”. Her assembled works bind together found objects, natural materials, metal objects and synthetic materials into temporary uneasy relationships which could un balance or come together. This tenuous relationship is often hinged on a small point of balance- celebrating or showing the fragility of how things are held together in the human mind and also by extension the physical world. Either transcending or combusting or both. In performance these works are brought into a live dissection- pulled apart during sound making and action in improvised live works dependant on the live moment between artist, object and audience. Sculptures cut from the body during performance are left exhibited as organs without a body. Ink drawings and assembled works depict masses of bodily features drawn or created in an automatic state from memory, physical feelings and heightened emotional states. Bringing into focus the relationship between the mind and the body drawing on sources of anxiety and bodily manifestations, sensations and memories. Her sound works has been featured and released by The Wire and her live sound art series based from The Penthouse was described as “Elevating Manchester’s underground scene to the top floor of a tower block” by The Wire. Robertson’s solo residency project Risk Assessment exploring risk and gender at Centre for Chinese Contemporary Art was reviewed by contemporary art journal Corridor 8 explaining “experiments invoke her chosen themes through abstract gestures; the act of shaving is amplified and grows monstrous with the use of blades and saws alongside shavers, whilst disembodied hair appears as a dead thing. Yet, the gentle and vulnerable act of singing contradicts such violent imagery.” Robertson has performed and exhibited worldwide from group exhibition For Posterity at Castlefield Gallery (Manchester), OutsiderXchangeS at Baltic Centre for Contemporary Art (Gateshead) and Inside Out/Next Generation at K11 Art Foundation (Wuhan, China) to residencies in New York with Sluice__ /Norte Maar (London/Brooklyn). Recent sound and performance commissions for Call & Response by CFCCA (Manchester) have seen Robertson perform at places such as The Whitworth Art Gallery, Museum of Science and Industry and John Rylands Library. Robertson was awarded Arts Council England Grants for the Arts for her research and development project TOO MUCH exploring the contemporary condition of anxiety via forms of performance sculpture and sound which included a special focus on the works of artist Helen Chadwick via the Henry Moore Institute archive. Appendage & Bond – a performance and sculpture work from this project was performed at Manchester Art Gallery for Wonder Women festival event What IS She Wearing curated by Instigate Arts. Rosanne has carried out in depth workshop projects with the public including Make Space at Manchester Art Gallery - developing a series of workshops with a material focus on recent works using nylon- opening up her practice to the public with a workshop exploring assemblage and temporary structure for their well being program. Recent projects include being selected by Venture Arts and Castlefield gallery as an artist for pioneering collaborative visual arts project exploring inter-responsive visual arts practice. The project brought together 6 learning disabled artists and 6 emerging artists to explore new ways to collaborate with a successful weekend introducing OutsiderXchanges project at The Manchester Contemporary art fair and a touring show to Baltic Centre for Contemporary Art, The Whitworth Art Gallery (Thursday Late) and DaDaFest (Liverpool). Recent projects also include being selected by Art House (Wakefield) as an artist as part of Culture Cures- an innovative training and mentoring programme for artists wishing to develop the skills necessary to lead with confidence a range of creative workshop programmes for young people experiencing emotional and psychological difficulties. Robertson is currently curator of Bill Drummond's Curfew Tower in Northern Ireland with Debbie Sharp as part of The Penthouse's curatorship of 2017. Manchester