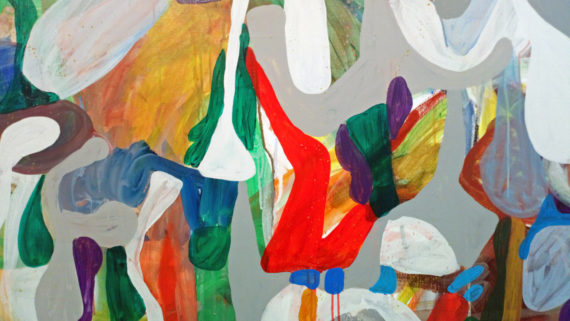 Now in its 20th year, The Berlin Biennale for Contemporary Art is at a cross roads as it once again enters into a dialogue with the city. Curated by Gabi Ngcobo, with a curatorial team made up of Nomaduma Rosa Masilela, Serubiri Moses, Thiago de Paula Souza, and Yvette Mutumba; The 10th Berlin Biennale has several voices that set out to complicate, confuse and contradict. You will not find a straight forward coherent theme here, but instead we get to explore multiple ideas around narrative histories, politics and resistance. To help complicate things further its public program consisting of lectures, performances, book launches, screenings, and panel discussions is titled ‘I’m not who you think I’m not’ and has its own lyrical manifesto. Perhaps linking with the obscure nature of this year’s biennale its visual identity is a pink and grey dazzle camouflage like design, akin to fashionable sportswear. Its logo, which is the Roman numeral for 10 could be a symbol for something negative or extreme or maybe it’s ‘X’ marks the spot.

The biennale’s title ‘We Don’t Need Another Hero’ is taken form the Tina Turner song which appeared in the 1985 post-apocalyptic action film Mad Max Beyond Thunderdome, which starred Mel Gibson in the title role, as well as Turner as the ruthless ruler of Bartertown, Aunty Entity. The film follows Max, a lone warrior exiled to the desert wasteland after a fight in the caged arena that is ‘Thunderdome’. He is rescued by a group of feral children that he reluctantly agrees to help find what he believes no longer exists; civilization or what they refer to as “Tomorrow-morrow Land.” The five curators of this year’s Berlin Biennale may liken themselves to this cargo cult as they attempt to find a place beyond the elitist art world and make their way to their own “Tomorrow-morrow Land.” But perhaps without the help of Mel Gibson.

The Biennale in the form of five venues is compact. The three main venues are Kunst-Werke (KW) Institute for Contemporary Art, Akademie der Künste and ZK/U – Centre for Art and Urbanistics. Two small venues; The Volksbühne Pavilion and HAU Hebbel am Ufer (HAU2) make up the five, but rely heavily on live performances and talks. As you’d expect there was a good international art crowd at the professional preview, with a respectable showing from the UK. Klaus Biesenbach (founder of both the Berlin Biennale and The KW Institute for Contemporary Art, current director of MOMA PS1 and Chief Curator at Large at MOMA, as well as serial Instagrammer) was in attendance and enjoying showing people around what must be his favorite venue; The KW Institute. The former margarine factory being the one venue that has been used in every Berlin Biennale since it was conceived back in 1998. 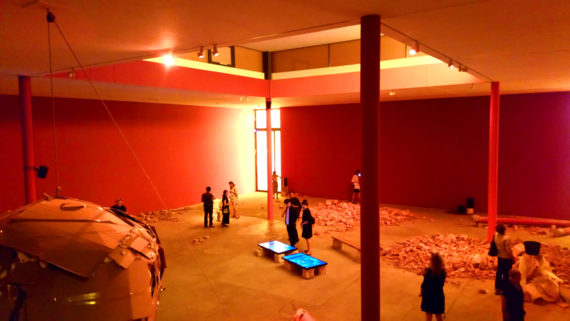 Dineo Seshee Bopape’s large installation Untitled (Of Occult Instability) [Feelings] (2016-2018) fills the main central space of The KW Institute and is a good show opener. Part post-nuclear landscape, part construction site; the work echoes both Mad Max’s world and the city’s own rebuild/rebirth after the fall of The Berlin Wall. A video of a 1976 Nina Simone performance plays out under the warm orange glow of the gallery lights and matching orange tinted windows. Music plays a strong role in this year’s biennale as nearby Fabiana Faleiros’ basement bar entitled Mastur Bar (2015-18) is inspired by the song ‘I Feel Love’ by Donna Summer and combines performance with installation. The highlight of The Institute for me, however was Mildred Thompson’s wooden assemblages from the 1960’s. An artist that I was not familiar with beforehand, her works have a DIY aesthetic that combine painting with off-cuts of wood, geometrically arranged into abstract wall reliefs. Her standout piece being the green [Woodwork] (1967). 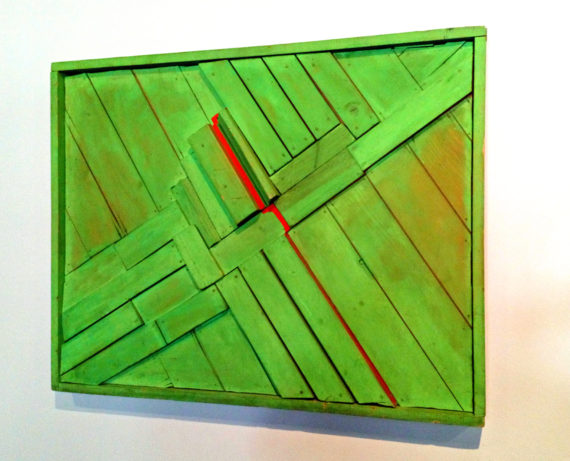 The short walk from The KW Institute to The Volksbühne Pavilion was a good chance to visit multiple smaller galleries, commercial and otherwise that make up the cultural quarter of Mitte. One such gallery taking advantage of the footfall that the biennale brings is me Collectors Room which is showing the retrospective ‘L’amour Du Risque’ by Eva and Adele of Eurotrash fame. Upon entering I ran into the famous artist-couple having their lunch in the gallery’s restaurant that greets you as you walk in. Not such an unusual sight for Berlin perhaps. 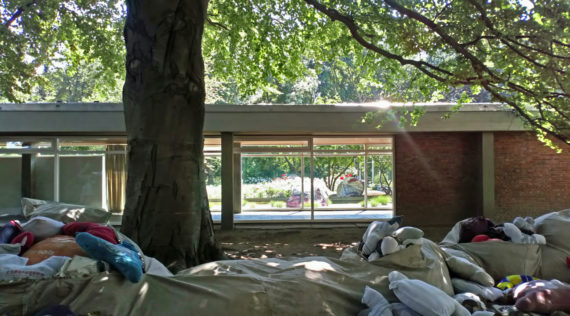 Inside one of the oldest cultural institutions in the world, Akademie der Künste (founded in 1696) the Biennale curators have attempted to upset its exclusive membership process and the traditional hierarchical nature of such organisations. A smart, well-installed show of sharp angular walls and moody lighting, the Akademie is loaded with politics and scale. New media transitions into old media almost seamlessly, as video and photography sit comfortably alongside prints, collage, painting, and sculpture. The juxtaposition of artists combined with the amazing 1950s brutalist architecture of the Akademie make this the standout show of the Biennale. 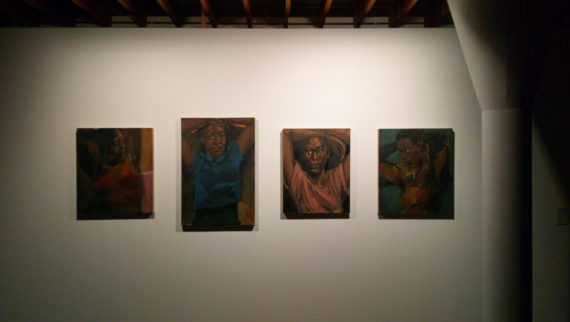 One of the larger names in this year’s Biennale is the painter Lynette Yiadom-Boakye who has a diptych and a polyptych on show at The Akademie der Künste. In A File For A Martyr To A Cause (2018) dimly lit faces gaze and arms cross overhead in her typically effortless style. In contrast the large colourful abstract canvases of Herman Mbamba leap off the walls. Whilst Oscar Murillo’s large intestine-like forms appear in multiple locations around the institute inside and out. At one point coming alive as we were treated to a living sculpture covered in a heavy dark leather shroud plodding along under the heat of the afternoon sun. An effectively elegant interaction with the space is Sara Haq’s Trans:plant (2018) which consists of reeds installed in the gaps of the parquet flooring sporadically placed throughout the first floor of the building. The work reminded me of the George Carlin quote “I like it when a flower or a little tuft of grass grows through a crack in the concrete. It’s so fuckin’ heroic.” The underdog story and myth of the hero is a strong thread in this year’s Biennale. 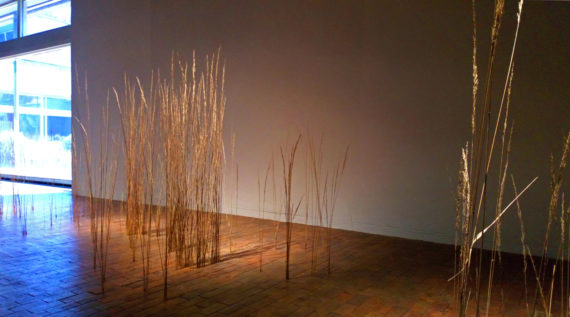 The ZK/U – Centre for Art and Urbanistics is perhaps the weaker of the three main venues. Crossover series from the other two venues such as paintings by Lubaina Himid and sculpture by Luke Willis Thompson are again on show here. Not a new idea, but nevertheless linking the three main venues of the Biennale together. The standout artist at The ZK/U is Tony Cokes who has multiple video works in the dark, club-like basement of the building that link text from various sources with pop music.

Changes in Europe over recent times make events like The Berlin Biennale particularly significant right now. They raise and ultimately answer questions about arts purpose in the world. Something that in the current climate is vital for the future of art and for artists making work. The 10th Berlin Biennale is not perfect by any means. However, the curators and in some cases the artists themselves have negotiated many of the stumbling blocks associated with such significant, international projects in a timely and thought provoking manner. Politically charged and broad ranging The 10th Berlin Biennale is everything a biennale should be and it may even have taken us just that little bit closer to a better tomorrow.