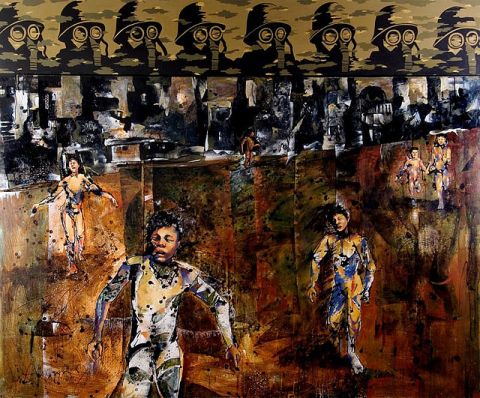 An enduring issue with art that finds an airing in foyers, or along the staircases and walls of non-gallery spaces, is that it can be all too easily overlooked. Not only are visitors ever more distracted, heads fixated on mobiles etc, they naturally move through such spaces en route from A to B: to the main gallery space, to the gift shop, the toilet, the exit … yet curious, attentive visitors to “90 Degree Citizen”, currently at Manchester Museum to 17 November, will have their double-takes and closer inspection rewarded.

Peppering the foyer, and spicing up the café, is a mix of paintings and photographic work by a disparate group of artists who happen to share ‘refugee’ status in their, respective, life experiences.

In different hands, those back stories would make for valuable publicity (and even art review) hooks: veritable gold dust to attract prospective critics, journos, and bloggers alike, all panning for a decent story or, worse, an excuse to mouth off about their latest whimsy of received wisdom on immigration, the economy, or another unrelated topic. There is no such play for your attention here by this project’s lead organisation, Virtual Migrants, or from the Museum.

Sure, visitors are informed of the underlying connection between the artists, through a complementary pamphlet. Doubtless, each of the artists has firsthand experience of abhorrent realities and hardships the like of which most of us could only (poorly, vaguely) imagine. But? The text panels for the artworks just state the facts: artist, title, media, year.

There is no pretence, no conceited theme, no cutting-edge claims or meritorious fanfare. In fact the show is muted to new arrivals … in my case, attention was initially grabbed by the Museum’s own exhibits of stuffed animals, tribal paraphernalia and mundane signage to the Café etc. Perhaps this is a useful muddling of a visitor’s mind? Intended or not, this is a purposeful unsettling, given the deeper context and abyss of unspoken issues that this show, and its attendant events and panel talks, lightly touches upon.

You even have to turn back round (180 degrees) to face the door by which you enter, to finally spy a large banner announcing the show: “90 Degree Citizen”.

If, in the audiovisual mayhem of the Museum foyer, some re-focusing is required, it leads you to find an art show that somehow ‘fits’, and ‘works’, in the spaces left between the Museum’s own exhibits and architecture. For me, a fundamental message is soon manifest: Art – especially smart, subtle shows like this one — has this ability to re-humanise people as “artists”; as “citizens”; as “people”. In the case of this show, it happens to be people who all too easily get marginalised, and at worse criminalised, as “refugees”.

For instance, if a visitor had been primed by Amang Markhody’s back story of his life in Kurdish Iraq, he or she might be forgiven for mis-reading his painting, “End of war” as an autobiographical representation: some kind of confessional expression. Yet having heard Amang speak, straightforwardly and sincerely, on a panel discussion during the opening night, his paintings ought to be simply read as having been painted by a switched-on human being who has been moved by ongoing crises around the world, especially the recent media attention given the Syrian State’s use of chemical warfare.

Markhody’s canvases conjure with figurative elements, merged into more abstract backgrounds. If you know of Manchester’s living painters, those working across the past couple of decades, then perhaps a stylistic sibling is Margaret Cahill (who happens to have a solo show, also in Manchester, from 7 November).

Tracey Zengeni hails from Zimbabwe. Her paintings show people reduced to, or constituted by, outlines. Her style is rooted in bright colours and bold markings that might have the feel of ‘cave painting’ simplicity. By the same token they display directness – perhaps invoking the frankest appreciation of painting: that if it is to show reality, it can only, honestly, show an outline against the faintly discerned first light of truth.

The seemingly surname-less ‘Mazaher’, originally from Iran, has been in the UK for just a few years but has been an artist for over a decade. In conversation he appears to be an enigmatic, good humoured soul. His ‘artist statement’ is playful and poetic and quite memorable (a rarity I would say after having read so many thousands of them over the past two decades). Likewise, his photographic works are faux puzzles: suggesting forms and patterns through replicated details taken from other photographs, and set on black backgrounds. The results are expressive and can spark the imagination. The sudden impact of one image, “Freedom” made my mind’s eye fire off an interpretive, ultimately futile, sequence: lines of script? music notation? rope work? ocean waves? Of course, the frame contains none of the above – only details from a human face (from what I could discern) – and why that emotive title: perhaps Mazaher grants the viewers the freedom to interpret his art?

The artists highlighted above are very well supported by Flora Alexander, originally from Iran, whose stark graphic work smacks of woodcut relief printing, or mosaic. The intricate pieces include text: either singular words, some of which are widely associated with national virtues or vices; or pairs of words that are recognisable conflicts of authority, such as ‘democracy’ offset by ‘dogma’.

Completing the rangy mix is the International Women’s Group (Glasgow) working with Streetlevel Photoworks (Glasgow) and Dutch artist Iseult Timmermans. The group of women has produced collaborative, participative, photographic works that seem to nod to political protest or, arguably, show an affinity with ‘outsider art’ … though I am loathed to resort to labels.

The context of the Museum is enhanced by the show’s inclusion of a conventional glass cabinet: this one containing a selection of Colonial objects, specially selected by the Museum’s own “Curator of Living Cultures”. That these objects might be up for repatriation is one progressive message that might be inferred. Another is the acknowledgement of such a messy, centuries-old, history of the transnational movement of both objects and people (and the merging of the two as in the objectified ‘subjects’ of Colony). Perhaps more will be made of these and other allusions if the show is to develop elsewhere, in future?

Right now, and until 17 November, this show is perfectly placed and pitched to the public. The salient point is not that these artists are ‘ex-refugees’ with a range of back stories that would excite the mind of any Oscar-dreaming Hollywood screenwriter. This is art. Pure and simple. Delve any deeper and you will find the artists are much like the art they have respectively made: intriguing, attractive, colourful, coherent, varied, compelling … if they have each journeyed thousands of miles, and many ‘lifetimes’, today these artists are a million miles from a reductive label like refugee.

This show is part of Platforma, the “arts + refugees network” celebrating its 2013 national festival and conference during 30 October to 1 November at the same venue. Platforma’s Director will be part of the panel for a special debate at the venue, 30 October.