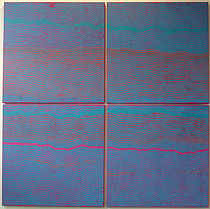 Despite the overwhelming evidence of abstraction being around in some form or other since the dawn of humanity, being an abstract artist is still a path less trodden, particularly among recent graduates. Indeed it could be argued that abstract art is rarely that ‘fashionable’ amongst ‘emerging’ artists, despite its enduring presence. Fortunately, fashion and notions of the ‘here and know’ seem to have little interest to most artists seriously engaged with abstraction. They just get on with it. They seem driven by an internal and enduring conversation with shape, colour, form and texture rather than a desire to hold a mirror up to the ‘state of things’. This is succinctly summed up in the show’s title ‘A long engagement’. The artists in this show exemplify this commitment to pushing forward a particular area of creativity. And they get on with it year, after year, after year, because that’s what makes them and their appreciators tick.

Some of the artists on show have been on my radar since the early 1990’s when I first moved to Nottingham, others are fresh discoveries. This is the first time I have met the gentle abstraction of Louisa Chambers. Her combination of soft colour, wobbly geometry and loose gestural washy marks all combine to create a curiously human form of abstraction, embedded with a palpable sense of our collective fallibilities in this digital age. They contrast well with the immaculate glossy reflective surfaces of Terry Shave’s resin paint and photographic surfaces. At first glance, they could be read as purely digital. They create a sense of spatial depth and layering akin to looking down deep into a river. They are wholly convincing constructions of non-spaces and intriguingly seductive. This sense of spatial illusion and trickery continues with the work of Ryan Heath, (also new to me) who draws you in with a clever painterly sense of visual depth and receding surfaces, via colour and texture. Only to reveal on closer examination that the surfaces are actually physically layered and it is not an illsion. This interplay of things not being as perceived makes for a rewarding encounter.

Lois Gardner Sabet uses water colours with considered efficacy to create flowing colour forms which bleed gently into one another. Reacting to music and other stimulus her images convey a sense of the illustrative without being illustrations. This is in part due to the language of the media, but also a testament to her intuitive painterly sensibilities.

Sheila Ravnkilde is on good form with her set of leaning colour texture planks. Gentle vertical lines break the surfaces. To command a space with so little, belies a deep intuitive understanding of form, texture and colour. She rarely disappoints. This continues with Carole Hawthorne whose colour field works create subtle reverberations between mauves, pinks and textural combed lines. Evocative of early morning skyscapes, these paintings take you somewhere intriguing, yet non-specific. They are well executed and assured.

Rob Hart is very much a ‘painter’ and like many of his show mates, this has evolved and pushed through the process of doing it again and again over decades. There is a surety in his work which evolves from observational studies into assertive marks and forms creating convincing imagery, which weaves in between figuration and abstraction. He translates the world into colour, shape and form into something significantly beyond and above its departure points and that is to be celebrated.

This is this inaugural show at the Backlit project space. The work on show is devoid of quick fixes or evident handles on which to pin audience connections or interpretation. Like the process that generates the work on show, it commands time to take in. Go and see it and take time as the artists have, it is well worth a visit.