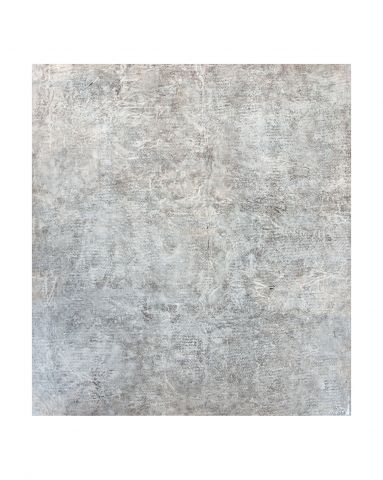 The recent work of Annemarie Murland describes a journey of displacement and readjustment. Using a variety of processes and materials, Murland tracks the shifting nature of her own identity to create works that are linked in a sense of nostalgia. The word ‘nostalgia’ combines the Greek terms for ‘return home’ and ‘pain’, it can be defined as “a yearning for a past period or place”. The artist consciously reaches into her personal past for touchstones, but moves through these experiences to redefine her sense of self. Janet Wolff observes a pattern of response to displacement, which can certainly be applied to Murland’s art practice, she writes:

Displacement… can be quite strikingly productive. First, the marginalization entailed in forms of migration can generate new perceptions of place and, in some cases, of the relationship between places. Second, the same dislocation can also facilitate personal transformation, which may take the form of ‘rewriting’ the self …

Murland’s work explores migration. As she has stated, movement is a condition for migration and when we move between places, we necessarily forgo attachments. We are set adrift in both an emotional and a physical sense. Binary oppositions are created; here or there, past or present. In Annemarie Murland’s case the dominant binary exists between places, specifically Scotland and Australia.

In many ways Murland’s recent practice bridges gaps between locations and time periods. It tells her story. Murland is descended from a family of storytellers and the experience of migration is woven firmly into the narrative of her family history. Her great-grandparents migrated from Ireland to Scotland in the early 1900s, settling in Glasgow. Murland was raised in Glasgow and migrated to Australia in 1991. She now lives in Newcastle.

Murland sees art as a language that can communicate stories. Her artworks are narratives that navigate and translate what she describes as ‘felt experience’. Her recent exhibition, A Long Road Home, was made up of a cohesive series of individual works, each addressing issues of displacement, loss and identity.

In floating works on paper, Murland explores the physical trappings of memory. Here, the tactile surfaces of common household fabrics, such as coarsely knitted blankets, become delicate weavings of personal history that connect the artist to her homeland. Murland speaks of ‘embodied texture’ as a vehicle for memory. The embossed paper surface, used in works such as Agnes (2008) and After Memory (2009), becomes a woven grid that supports Murland’s exploration of her remembered past. Through a process of mark-making and erasure, the past is captured as a trace. Murland expresses her exploration of the fabric of maternal memory in the poem Mother Nurture:

Stitching time back, when life was all but a

Fragment of the father’s eye

She moves through spaces dark to find rest

She sighs at last, home

Annemarie Murland has worked consistently to develop a personal painting methodology, which is able to effectively knit the materiality of paint with her own real experience. She writes:

Integral to my process and methodology is the relationship between artist and materials, which translates the embodied experience of migration into visual, abstract documents that reference ‘surface’ as skin.

The use of abstraction has allowed Murland to explore complex and personal signs and symbols, emotions and connections. Her paintings often refer to the landscape, translating the fabric of the environment onto the ground skin of the canvas. Here, the artist is able to possess and reconfigure place as it relates to her personal identity. In some works, such as Journeys Past and Present (2008), Murland relates her methodology to her mother’s craft of knitting. Layers of paint are meticulously applied to the canvas surface and are reworked to replicate the careful and rhythmic formation of a knitted blanket from a single line of wool.

Annemarie Murland’s paintings appear as independent objects, which are specifically arranged according to site. Murland treats the canvas support as an ‘archive’ for memory. In her exhibition, A Long Road Home, the paintings were hung close to the ground, with a gravity that reinforced their relationship to the earth or landscape. This dislocation in space elegantly echoes the sense of displacement that drives Murland’s work. The viewer is encouraged to acknowledge the physical space that is occupied by the body when navigating the exhibition.

Murland’s book of photographic images, The Dead End of Culture, could be described as a study of spatial relationships. These photographs record aspects of the artist’s return journey to Glasgow in 2007. The images included are specifically related to Murland’s navigation of her home town and are encoded with the resonance of her past experience. Carol L. Magee writes:

In looking at a photograph of an urban place, one reads a spatial story. Movement is central to understanding it, as people move through their city and engage its places, both in daily routines and in rarefied moments… a photograph reveals how people connect with, and belong to, their cities.

Annemarie Murland’s photographs, writing, drawing and painting combine to tell her part of a family story. These works are a legacy and a conversation, where past and present intermingle. Although Murland’s journey is a very personal and emotional one, she filters this experience through the material processes she applies. The resulting works are refreshingly light-handed, avoiding any excessive sentiment or self-indulgence.

Murland quietly insists on the essential importance of family, place and the attachments that bind us all. Her journey has been driven by her art practice, which has allowed her to process and resolve many of the issues that come with migration. Annemarie Murland is now comfortably established in Australia and describes herself as being ‘resolutely Scottish’. Perhaps we should conclude that home is not a place but a state of being.