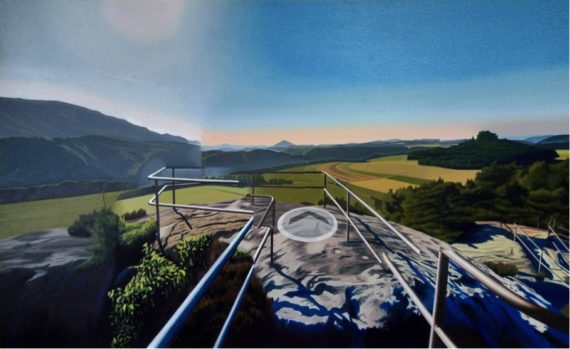 There is nothing worse than visiting a gallery that has had a former heyday and is now in decline; that moribund feeling simply clings to you. In contrast to these galleries are those that are on the rise; they pulse and beat, imbuing you with a feverous energy.  Their incandescence works its way into the imagination, giving rise to stratospheric ideas. These galleries have an emerging identity, like a wildly confident teenager who is willing to take risks; there are moments of utter brilliance, a prodigy in the making perhaps. Naturally there are also those moments to reflect upon, but where others would dwell, the wildly confident teenager simply moves on. It’s a fast paced ride, but one that you, and others, can’t help being drawn into.

Elysium is an example of a wildly confident teenager. A relatively young artist led organisation, Elysium are embarking on their most ambitious project yet, the opening of a 4000 sq. foot venue in Swansea City Centre. A former nightclub seems to be the perfect match for such an organisation. The new venue consists of two exhibition spaces, a test bed area, a workshop space and a café bar. Perhaps the exceptional part of the story is the way that the project is funded.

Over the last 12 years, Elysium has worked with local landlords and housing charities to renovate vacant premises within the city centre and turn them into artist studios. Elysium now occupies four buildings in the city centre and represents the largest studio complex in Wales; 83 studios and counting… Elysium’s new venue will be funded by rent from their studio complex and sales generated in the café bar; no more waiting for hand-outs from the bank of Mum and Dad, this teenagers got themselves a job.

With a diverse artist community (and those who have come along for the ride) ideas are never a shortcoming at Elysium; many are enacted, and quickly. The new venue has gone from conception to realisation within just 6 months.

Another example of ideas being turned into reality can be seen in BEEP (biennial exhibition of painting). Initiated in 2012, BEEP represents the only prize in Wales exclusively for painting. From humble beginnings, the last manifestation of BEEP, attracted 550 entries from 10 countries, with selected works shown across five partner venues. It is anticipated that 2020 will represent the largest BEEP ever with 7 partner venues across the UK already committed to being involved.

It’s not all plain sailing, the teenage years never are, Elysium face many of the perennial problems that other galleries do. Dare I say it – how do you widen your audience?  Perhaps some Google Analytics or Facebook analysis – yawn. Elysium’s solution to this problem is refreshingly simple – the creation of a mobile gallery.  Perhaps as adults we overthink, making things more complicated than they need to be. Converted from an old demonstrators van, the mobile gallery has been used to take Elysium’s work out into the community. The mobile gallery seems typical of Elysium’s ‘do and see’ approach with its purpose in a positive state of flux; it has already been used for learning and engagement work, but also doubles up as a low-fi, but highly visible method of marketing and publicity.

I’m not sure if I want Elysium to grow up, its all too easy to imagine the quick decision making and the ‘do and see’ approach disappearing into a quagmire of bureaucratization as it grows. Maybe its course will be very different, and it will remain the perpetual teenager. For now, it’s time to simply enjoy its youthful energy.