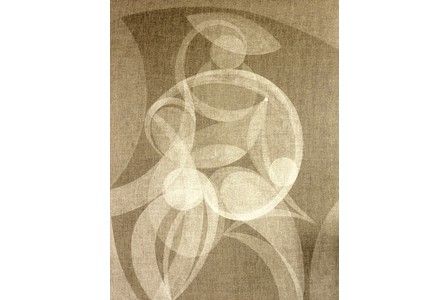 The portrait occupies an anomalous territory alongside other more discursive practice in contemporary Art. By its very nature it can hold a singular rather than pluralistic position vis a vis its intentions and its impact. It is also bound up in the historic self-indulgence of the moneyed and powerful. The Harley Gallery is home to a collection exquisite historic art including portraits. It is also a remarkable architectural hybrid of traditional and contemporary features. An ideal location for two contrasting artistic approaches, simultaneously exploring portraiture today.

On the ground floor one meets the immaculately executed large biro portraits of George Hardy. These larger than life works are performed with a controlled high craft methodology. It is only on up close examination that the material reveals itself, such is their sensitivity of his mark. The images themselves are akin to mug shots, full on faces, monochrome, no background and no other information.

The place of subject in these works could almost seem secondary, to the primary function of the work. If one views a portrait as a depiction of the holistic person, rather than just an approximation of a face. Yes these are pictures of people and the titles even tell us so. For example there is Sabina who loves dance and drama, Eric the retired miner, not forgetting Ade North Nottingham’s own Robin Hood lookalike. Who with his rustic shirt, is the only subject that really gives any clue to an identity, rather the surface of the face.

This elimination of peripheral information hints at the Dusseldorf School’s notion of objectivity. Recording ‘as it is’, without sentiment. The process of squaring up from a gridded photograph teeters close to the banal. Were these in fine pencil, the topple into banality would be as sure as eggs is eggs, a banana skin slip into cleverness without content.

The thing that gives this work current validity is not then craft skill per se, however evident. It is in the choice of media. Hung just a stone throw from some seriously expensive historic art they set into play an embrace of the ordinary and the everyday, with a cheap and cheerful media that is about as low brow as it gets.

Moving upstairs to the work of Yelena Popova, I am met by a body of work that is clearly at play with its position in time and place. The skill of its execution is also there for the taking, but it speaks with a quiet voice, almost a whisper. The oil on linen canvases are stacked and toppled at jaunty and playful angles with a healthy jab at the conventions of the formal hang. Balanced on gilded sections of chairs, stools, and an empty picture frame, they conjure the visual language of a higgledy piggledy studio pile up. Oval canvases hold each other and a larger rectangular form in place. I have seen a number of these anti hangs over the years, but this for me is one of the most enjoyable.

If the placement of these immaculate canvases, in an oddball configuration was the starter. Then their treatment of them as painting made for the main course. Light but precise sweeping marks arc across the untreated surface as if lightly applied under painting. These marks are faint to the point of being barely legible.

Close examination rewards you with the depictions of abstract portraits which joggle toward a rich variety of art historic references. They are executed in the style that hints of a hybrid of early modern art forms like Cubism, Blaue Reiter and a bit of Suprematism for good measure. This is art of gentle Intelligence, not forced cleverness. One form reminds me of Holbein’s ‘the Ambassadors’, another triggers associations with a hatted Madame Cezanne. Various historic references are there for the taking. This is painting about painting for those who know painting.

This work with its golden furniture props and colour base also links well to the older stuff on the floor below. Despite subverting the conventions of historic status, it still pays homage to its place in the continuum and evolution of the wider subject itself. It is also elegant work that is as commanding to the eye as it is stimulating to the mind.

The composite parts are interdependent on one another, as is art on its history. An earlier wave of artists relied on ironic appropriation to interrogate this history. The problem with this approach was its smug and cynical endgame. It offered nothing new in its place. If art is to have worth for me it may well dissect its history but it must also, bring something fresh to the table. Yelena Popova is an exciting artist clearly adding something extra to the dialogue.