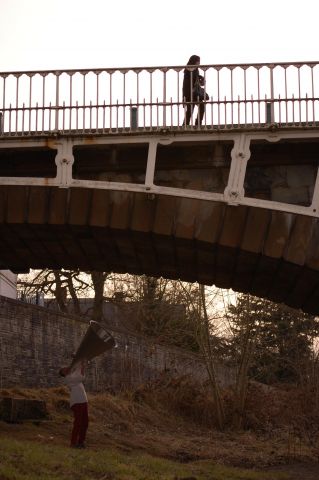 Afield draws upon the work of an artist over fifteen years: fifteen years of walking in and reflecting upon different continents, contexts and communities. Simon Whitehead makes connections between locations; exploring the sensory experience offered through landscapes, inhabitants, paraphernalia and habits. The conundrum is how to capture an ephemeral experience such as this and pull it into a confined gallery space. Whilst this process makes the experience more accessible, I was conscious always of a sense of having a restricted view – being forced to look into a peephole at something much too big to fit.

The first piece, titled Pieces: Llyn, 1994-5 included video documentation and a found aluminium sheet. The metal appeared to be something unravelled, broken and creased – with windows. But on the screen, which was small, so I had to peer hard to determine what was happening, the metal became a live thing, blown across a wild place by noisy wind. Aluminium is a metal that is found in the earth’s crust. The metal behaved like a piece that had escaped from there and didn’t intend to be caught before it had had some fun. Eventually, the aluminium is returned, with difficulty, by a struggling man. The second video showed contrasting crossed (fixed but moving) wires and scudding clouds. I saw manufactured wires, wind, an uncontained element, and aluminium as something between the two, with a human being as conjurer, struggling to connect all three.

Stalks (Cardiff) 2001 included four wooden boxes, with names. The video showed Gareth walking, carrying a camera focused on his face, then past his face at the surrounding rural area, obviously familiar to him. The screen was small and the sound low. I got very close to the triangular prism boxes in order to hear his words. “There aren’t as many fishermen as usual”.

I moved on to Norman’s box. An older man, proud to be the camera carrier. He talks in detail about his urban environment, which he sees through spectacles. Going from street to park, his face softens and his pace slows. Combining visual and audio clues, I guessed at his whereabouts.

Kofi is free and swinging and has a hood on. He relinquishes the camera, so we get a wider (unplanned) perspective. Although the camera remains focussed on Kofi, we travel through a city-scape, with doorways and shops and dangerous roads. He picks up a bright red spade and drags it across the wet pavement and walls, exploring different sounds, textures and colours as he moves. Because he is distracted by the filming process, his movements are unselfconscious and he becomes our leader with a red spade.

Simon has earrings and walks under trees. He is the silent type. I hear only tap, tap, tap.

Next, onto Stalks (Barcelona) 2000 – video documentation and drawing. This spoke to me of territories, people and other animals operating in an area and environment to which they belong and in which they co-exist, by tacit agreement. A key is used to get into a building, or out of the outside. A small boy tenderly puts live rats in a cage – switch to a shot of a dead rat on the street, this is a place of contradictions. The small, sepia drawing is of the woman who feeds the feral cats, framing the wild into something small.

2mph: a pace for walking in rough country with cattle and sheep 2002 – video documentation, cart, stuffed goose. I smiled, the cart was nice, wooden, with well padded handle; personalised and dated by poster girl with parasol inside the door. It evoked nostalgic memories of children dragging noisy toys for miles – a pint sized screen shows us the recorded journey, from the point of view of a bemused goose peering out of the cart through a distorted round window. I wonder where they are taking me. I wonder who ‘they’ is. I feel giddy.

Hwyrgan (by the late hour) 2006 video documentation and light shoes. A wooden shelter attracts my attention. Something to go into – safe and inviting. Nowhere to look but at the screen. Light shoes do not illuminate their surroundings, they create a path through them, like cats eyes on a road; they walk near water and possibly through mud, on through dark woods, with patches of lighter sky. Different intensities of light –intruding, invasive light shoes, my eyes were attracted and I was repelled. I wrote ‘I want to stay to see where the light shoes take me’. I managed to leave.

Pings 2008 – video documentation. A much larger screen, together with headphones, so I can hear the awful feedback of a guitar being played by the environment; by grass and by water. The shots of the guitar are indistinct until it is tuned and the tuning of the sound corresponds with the tuning of the picture. The environment is calling the tune, but the sound is orchestrated by a person.

Turning round to watch Lake Guitar 2005 – video documentation and branch. This was screened on a box on the wall. The branch was a natural object brought inside (not many organic objects in the exhibition). On screen, a chair in the snow, which is incongruous, but so is the red guitar being carried across the snow towards the mountain (brought to mind a shot in Werner Herzog’s documentary “Encounters at the End of the World”, of a distracted penguin waddling off to certain death in the Antarctic interior).

And now the new piece, Louphole 2010 – video documentation, megaphone, sound and drawings. Photographs of the artist, lone wolf with giant megaphone, prowling around Newtown and howling under the bridge. Pictures of children being wolves too, eliciting a delightfully frightened response from children who are not wolves.

I discover then the simple beauty of small wolf drawings framed by recycled cardboard cd cases, striking against the white gallery wall. A closer look picks out words within the pictures, so the wolves appear out of the words (perhaps reference to the myth that surrounds wolves?). Wolf hiding, wolf running, wolf howling, wolf walking, human beings sitting and sleeping like wolves, the man and wolf puppet, the wolf leaving words behind. A line of tiny words, which tell of a man and a journey and a brass band, led me to tiny speaker on the wall. Lean close and you will hear the wolves.

Out of the gallery then, but not away yet. The night is cold, but the show is about to begin and we are in it. Around one hundred people gather outside, warmly kitted out, with sturdy boots, and set off through the town, pursued by members of the Newtown Silver Band. They lurk behind buildings, peering out with their instruments and torches. And now the instruments howl, culminating in the performance of a piece composed by Barnaby Oliver, and the sense by this time, that the whole of Newtown is involved: people in the streets, motorists on the bridge, the police officer on duty (slightly bemused). The music builds into a march, and we are led up the Bryn, a steep hill above Newtown, from where we can see the orange lights of the town below us and the stars above. The struggle to climb and walk at a tilt brings community and conversation. And then, for the next half hour, we stand above Newtown and we howl; a process that flexes our stomachs, stretches our mouths and stimulates our imaginations. Ow ooooooo awoooo a wu wu wu woooo, overlapping, breaking, male and female, guttural, heartfelt, musical and wild. We are joined together by our ability to communicate. And then listening, waiting for a reply… answered by the distant sound of cars and the resonance of our own species. We have no need to be answered by another wolf pack really; it is enough for now that we have made the journey. We have committed.

That’s it – the end, but is it really the end? People are already talking about ‘next year’ and that’s the real point, isn’t it? – that an exhibition such as this brings the art into a small space to be witnessed, then sends it out into the world again in hearts and minds, to roam free, wild as a wolf. 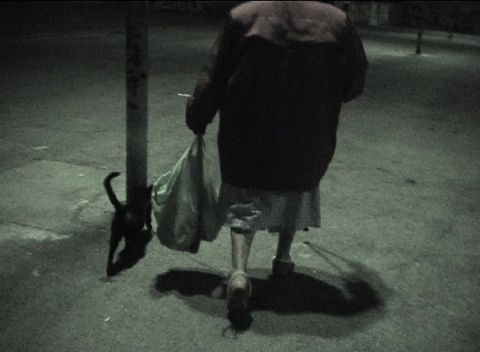 Julia Dean-Richards is a writer and performance poet, living in the Shropshire hills.Â