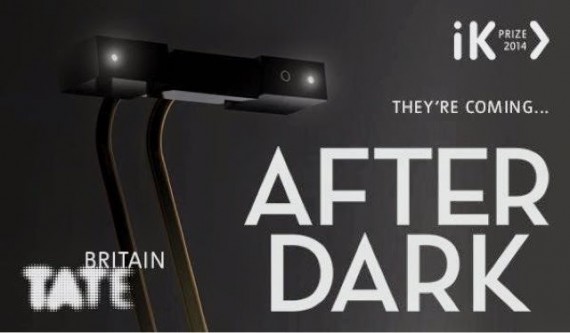 Its ten o’clock, Wednesday 13th August, 2014 – armed eventually with an up to date Google Chrome and an Internet Explorer tab open in reserve it can mean one thing only. The 2014 IK Prize winning project has landed. Welcome to After Dark by The Workers, a digital design studio established in 2011 by Ross Caims and Tommaso Lanza who are joined by collaborator David Di Duca.

After Dark uses four camera equipped robots in the galleries of the Tate Britain controlled remotely by members of the public in an online queueing system. Wide eyed and eager to see four live feeds, one from each of the robots the experience began. Viewing the works in the gallery through the eyes of four robots felt initially like some disconnected existential experience, however it all clicked – I clicked, I joined the queue.

The IK Prize has the potential to be the next Turner Prize – pause, if you are a red-top newspaper writer/editor – please stop right here. You will not find comic value here, well provided one of the robots isn’t remotely hacked and decides to initiate some revenge on a Damien Hirst. Anyway, as I was saying, back to the Turner Prize. The entry cost this year for an adult will set you back £11 – whilst the IK Prize 2014 winning project After Dark enables users around the world free access.

However it might not be long before a robot bursts out in a drunken splurge with a case of Emin fever, for TV outbursts the Turner takes it. All publicity is good publicity right?

Unless you are a printmaker the Turner Prize seems to have had it all, the IK Prize is strictly for the development of experiencing art through digital innovation. Printmaking robots anyone? On a more serious note, for access the IK Prize wins hands down. For once we the general public can encounter contemporary art before Mr Searle and his skinny queue jumping jeans can.

It was nearing two o’clock in the morning, definitely caffeine o’clock, I was still hopeful of a chance to operate a robot. I saw out the five hour set, no luck I’m afraid this time, but the robots are at Tate Britain until Saturday 16th August, 2014. Galleries and museums please – you don’t need Google Glass relaying information any clunky audio guide gives out, you need robots.

At the moment the IK Prize wins, maybe the Turner Prize will pull back a point when it opens at Tate Britain on the 30th September 2014. (Will they let the robots into the Turner Prize?)