Alain du Pontavice | A Journey, Here and Beyond - a-n The Artists Information Company 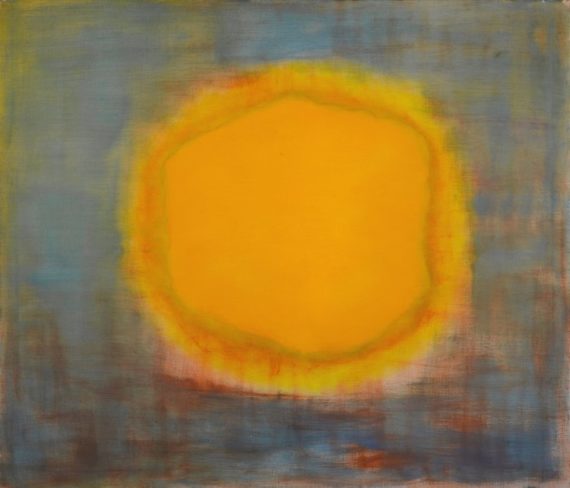 Witness to my inner self

The art of Alain du Pontavice

Alain du Pontavice’s ethereal, multi-layered paintings defy categories. Are they Surreal? Symbolist? Abstract? Form? Yes, all of those things, but none of the labels cover the complexity of the work. “When you see a painting exhibition you should just be open to the impressions, don’t rush to reduce it to a category,” he says. “It’s limiting”.

He was born and bred in Paris, and an early childhood influence was Alexandre Iacovleff, the Russian Francophile painter who had travelled to China on the “Yellow Cruise” from Lebanon as the official artist of the commercial expedition in the 1930s. Alain’s great-grandmother had been a friend and her home in the Loire Valley, where Alain spent much of his childhood, was full of Iacovleff’s Chinese etchings and paintings. China and Chinese culture fascinated the boy.

In Paris he went to the independent art academy, La Grande Chaumière, in the heart of the home of Impressionism, Cubism and then Surrealism, Montmartre, where his companions were mostly sculptors, and he spent hours with them sketching their work.

But China had never released its grasp. He studied Chinese martial arts, including Tai- Chi; for his Baccalaureat he took Chinese, and had to do it by correspondence course because nowhere in France taught it; and he did an MA in the Chinese language.

“’Martial art’ has the term art, and it can be quite subtle in terms of internal energy,” he says. “There is a thread, a sensitivity, that I needed to understand and let it emerge. Martial arts mediation allowed that until I got better at drawing and calligraphy and painting.”

At 24 he went to China for three months, staying in a local high school in a very politically correct regime. He met an ancient calligrapher who was not allowed to practice in the Cultural Revolution. “He had a 400-year wooden old house and was able to keep it because he had a bust of Chairman Mao in the window,” Alain recalls. “I used to go to his house at night and we would do calligraphy together in secret – on newspaper, because we couldn’t afford rice paper”. He sometimes still paints on the floor in the style of the traditional calligraphists, with the confidence of sweeping large brush strokes.

In the early 90s he was back in China with a textile company, in Shanghai which was to be his base for 15 years. He travelled widely, to Japan monthly where he was enchanted by a culture that encompassed gardening and the tea ceremony as well as textiles, and to Yunnan with its borders on Tibet and Thailand, to Mongolia and to Manchuria.

Textiles introduced him to a world of colour as well as texture, elements that were to be layers for his own praxis to come. “I was working with different materials, printing and dyeing, beautiful processes that take time to learn,” he says. “It really exposed me to colour, and the ease that I had with colours afterwards came from that. I was surrounded by colour.”

But also from his Parisian youth, when he was in the midst of South American artists, came a curiosity about the magic of the Andes that had stayed with him. Already a Spanish speaker, he moved to Chile drawn by the mountains’ energy and light – “At 4.30 in the morning, the light is amazing”.

He met the influential artist Felix Lazo and in no more than five sessions Alain was introduced to oil painting and the technique known as automatic drawing, whereby one draws without conscious thought what comes to mind and develops art from what appears.

“Felix and I had many things in common, including the practice of meditation which is part of my daily life still,” Alain says. “It helps you to open the sub-conscious, and automatic drawing allows you to go through layers of your mind. The very first drawing is whatever comes, and the you get stages of symbolism and maybe into surrealism – you enter another world, and every morning I draw and it just comes. I might make 15 or 20 drawings in an hour, all different”. Lazo calls it “creative fluidity”.

Not all of Alain du Pontavice’s paintings are sourced in this way, and he takes influences from Monet for some of the misty landscapes that emerge on his canvases, and from Paul Klee whose abstract shapes inform some of the features of his large paintings. But often those features come from automatic drawings.

On a drive through Patagonia he came across a hidden valley, a grotto where he saw mysterious two-thousand-year-old paintings of discs, early cosmic representations, which took his breath away. Those orbs are still with him, and appear frequently in his painting now, often very textures with added sand or scratched with household

implements. He can spend days and weeks working up the texture of a background without knowing what the eventual subject will be. “You have to let it come, to recognise it”.

Four years ago he came to London, partly to help with his children’s university careers, and has stayed. “I long for nature sometimes, the sun and freedom of the Andes, and we’re shut in by the weather here, but in London I have everything else I need”.

However, his London studio is small compared with the large canvases he likes to make, and this year he is to open a new studio in the rural south of France which will give him the space he needs – “I have to be able to work on eight easels at the same time” – and will spend half his year there.

The canvases – some quite small, some extremely large – command attention, whatever their size, and this is to do with the way the painting is built. The background is as important as the feature for him, the texture can be actual, often made on linen and with grit or sand worked into the paint to give a sense of an extra dimension.

Those tropes of Klee or Monet are, in the first case, the result of his automatic drawing practice, and in the second seem to rise out of the background as an ethereal landscape. The paint in the environment of the picture often appears like a sewn fabric, with vertical and horizontal strokes weaving into the central image, such as with Fusion in which a sun commands its golden colour from the subtle small strokes of red, blue and yellow in which it is set. In a later, slightly smaller, painting, Mist above water lands, the sun takes a less prominent place in a busier background that has the Monet-esque shadowy shape merging.

The fastidiousness in the background matched with the playfulness of the feature taken from his automatic sketches, as with Witness of the Antique which has a Bacon-like sense to it, draw the interest into these pictures. Overall, these are paintings in which the artist is delighting in his medium, oil paint, and still discovering its potential: it is good to know he is still in the process of discovery, and that there is more to come.

A deeply contemplative man, Alain du Pontavice’s pictures are almost a conveying of things deep inside that cannot always surface when bidden – one painting he began in Santiago in 2006 was a much built up background which was only completed last year when the final feature was added.

“It takes time to come, sometimes, but painting is a witness to the richness within all of us,” he says. “It doesn’t belong to me, I am just witness to it.”