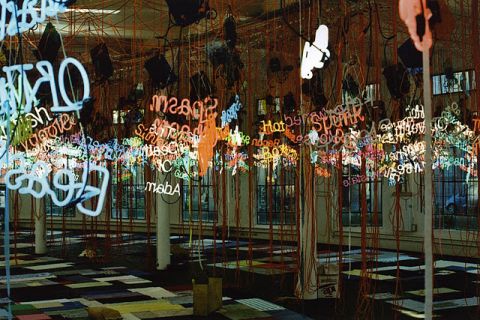 Since their original publication in 1865, Alice in Wonderland and Through the Looking Glass have had an unprecedented influence on the visual arts. Charles Dodgson, working under the pseudonym, Lewis Carroll, created a kind of dream world that can be appreciated by both children and adults alike. Exploring themes of the uncanny, unexpected, irrational, absurd and fantastical, the story of Alice is one that we all know and love. Tate Liverpool’s current show, Alice in Wonderland, offers visitors everything from original manuscripts, sketches, photographs and memorabilia, to both traditional and contemporary painting, sculpture, and video responses to the Alice adventures. The pieces on show in this exhibit explore various ideas such as the temporary nature of time, the precariousness of childhood, the impact of the written word upon visual culture and issues of identity. As a collective, these works highlight the more sophisticated themes which, even as children’s books, the Alice stories still present.

This exhibition displays an exciting range of media which explore themes that have arisen from the Alice stories. Jason Rhoades’ playful neon lights which hang from the ceiling are colourful and stimulating, and portray how the written word still influences contemporary art. Whimsical pieces such as Mel Bochner’s, Measurement: Eye-level Perimeter (Ask Alice)(1969/2011) takes the form of a black line marking 9 feet around the top of the exhibition’s first room, signifying the exact height which Alice grows to after consuming the contents of the ‘Drink Me’ bottle at the beginning of the book, which shows that the Alice stories are continuing to inspire fun and thought-provoking artwork, which can make all ages reminiscent of fairytales they have once enjoyed.

As many know, the tales of Alice were of course inspired by a real little girl named Alice Liddell, the daughter of one of Carroll’s good friends. In this exhibit visitors are treated to a whole host of photographs by both Carroll and other artists, of Alice and her sisters, ranging from when they were little girls up until their late teens. Carroll felt that childhood was so precious and short that he tried to preserve it using photography and story writing. As well as photographs of the real Alice, this exhibition also showcases many original manuscripts and sketches from the Alice adventures, as well as some of Lewis Carroll’s diaries and famous drawings by Sir John Tenniel.

In 1907, the copyright for the Alice stories ran out, allowing the public sphere to positively run wild with it. Innumerable other illustrated editions of the story were published and in a wide variety of languages, many of which are on show in this exhibit. Alongside these are fascinating cabinets of curiosities, containing early Alice memorabilia such as painted wooden figures, card games, lantern slides and crockery. This extensive and impressive collection shows visitors just a snapshot of how Alice became a worldwide phenomenon.

Many well known Surrealist artists such as Salvador Dalí, Max Ernst and Roland Penrose were inspired by the Wonderland adventures. Surrealism took great influence from Carroll’s Alice books, and the British Surrealist Group of 1936 were even dubbed the ‘Children of Alice’. With the use of such vivid and odd imagery one can see clearly how Surrealism and Carroll’s dream world tie together. A particular highlight of this exhibition is Dali’s 12 illustrations for Alice in Wonderland. His famous melting clocks and ‘crutches of reality’ can of course be seen within the drawings, relating perfectly to the relativity of time and space in Wonderland.

Even by the 1960s, Alice in Wonderland and Through the Looking Glass were still having an impact on visual culture. Part of this exhibition is dedicated to the way Carroll’s stories influenced the more psychedelic art of the era, bringing to light the ‘alternative experiences’ that came with drug culture, as well as questions of identity, and our perceptions of immediate reality. Here one can see the work of John Wesley, Paul Laffoley and Peter Blake amongst others.

There are additionally many video installations to be found relating to the Alice adventures, ranging from original silent film clips by Cecil Hepworth, Magritte and even Walt Disney, to contemporary video responses from Diana Thater, Gary Hill, and Douglas Gordon to name a few. These explore themes such as time, mirrors, double perceptions, space and more, putting a modern twist on the connotations of Wonderland.

It is clear from the sheer amount of paintings, illustrations, photographs, sculptures, installations, videos, and memorabilia in this exhibition that Alice has had a significant impact on visual culture from the word go. Alice’s whimsical adventures with talking cats, mad hatters and stones that turn into cakes have certainly made children and adults alike a little less sceptical of falling down the rabbit hole. As a story that can be enjoyed by all ages, Carroll has created an alternative reality to which, even well over a century later, one still enjoys escaping to, and the Tate Liverpool has celebrated it perfectly.