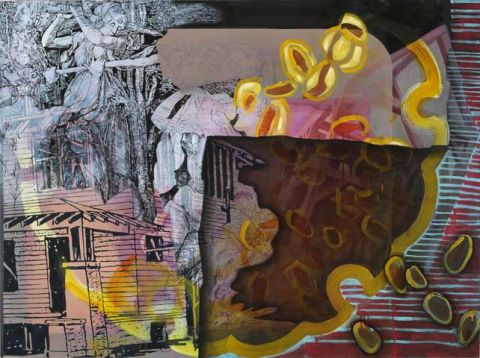 In these two concurrent exhibitions, each site is displaying two bodies of Epstein’s work: the Customs House Gallery in South Shields showing the older series of works, Seasick yet still docked and How do you process being old and young on the same Saturday night?; Vane in Newcastle showing the newer works of the Nimble elephant/careening dancer series, and The distance between lots of love and all my best series. The unresolved tension between meanings in each title corroborates a fact with the physical works – these are shows of abstract works that attempt to avoid representation. Holding this in mind, both shows can be read as a continuum, inasmuch as they appear to provide their own context of cause and effect within which to situate the individual works. Each series has its own aesthetic signature, across the whole of which I will attempt to traverse in this essay. The necessity of using overly brief, general and reductive descriptions, however, falls short of illustrating the works – in real time before the viewer’s meditative eye, their presence asserts a vibrant yet self-contained ambition and realisation.

In their actuality these are intuitive works, giving the impression that each image has autonomously, perhaps spontaneously, organised its own aesthetic. Considered in this light, we could understand Epstein’s skill in negative terms, an application that defers the artist’s visual intelligence into the space out there, facilitating the image to bloom organically like a flower into its own unique form (as ‘part of how the world thinks/ so through us the blank/ stuff of space knows itself’, as poet Ken Smith elucidates). Under the artist’s nurturing care, each image grows into itself, each series coalesces, and consecutive bodies of work grow out of their predecessors. The signature of each work is deferred from the artist to the image, and indeed there are no signatures of authorship upon any of the works in the two shows.

‘Pardon me for asking, pardon me for thinking…’ is the title for the Customs House Gallery show. These older works present how external reference (and perhaps artistic agency) becomes absorbed, assimilated and dissolved into intuitive abstract practice. There are recognisable references within each image, conversing with, and overlain by, abstract painted layers. These painted layers seem to grow out of, or on top of, or around, the references, producing an awkward balance. Abstraction can be defined as ‘a state of withdrawal from worldly things or things of the senses’ – the starting point is the sensory world, the manifold labelled world of recognition and reference in this case, from which a process, or continuum of practice, serves to document a withdrawal. The two bodies of work at the Customs House demonstrate this, the process creating two distinct aesthetics. Generally speaking, the Seasick… series presents a blockier and harder edged combination of textures, more cumbersome, each texture more distinct and discrete, whilst the How to… series presents more dynamic flow, softer, with less hard edges and more bleed.

The title of the show at Vane is ‘All of me is asking, all of me is thinking…’. There are two bodies of newer work on show here. Under the collective title of The distance between lots of love and all my best, the medium has changed from paint to collage, through the cutting and sticking of magazine images onto white paper. In terms of referencing, the images contain the textures of recognisable sources – carpets, speakers, buildings, body parts, stars, and so on. These textures arise not only out of the objects of each photograph, but also from the age of the magazines from which the images were taken. Texture is a key word here, for in the compositions the references to objects become dissolved through the artist’s facilitation of physical emergence within the space of the paper. The collages appear crystallised as distillations of abstract forms, moving on from the spectrum-based dichotomy between representation and abstraction found in the series at the Customs House Gallery. Whereas the latter tends towards a presentation of the opposite ends of the spectrum as distinct and separate, the former creates a simultaneous fusion and fission of the two, resulting in an irrational immediacy. This immediacy takes us further towards the pure aesthetic of abstraction, rather than the recognisable sources of the textures serving to root the viewer in associated meaning. Whatever the objects were before they were cut from their sources, their worldly identity has now become arbitrary before their affect upon the field of vision.

The painting series, Nimble elephant/careening dancer, takes the process of distilling the abstract another step further. After the process of facilitation withdrew deeper into abstraction through the collages, up to this point the work still presents a recognisable apprehension of real-life objects. The progression, from here on in, attempts to disembark more completely from references to real-life objects. All recognisable referencing appears to have been dissolved in this further stage of organic growth. Yet evidence of the soil in which abstraction is seeded remains – a number of shapes are almost unrecognisably lifted from the collages and reproduced in this series. These forms appear as reverberations of the process through which these art objects appear to continually author themselves through a process of cause and effect. In their turn these echoed forms are dissolving into the abstract painted forms, much as the references found within the earlier works are seen mid-dissolution, the two concurrent shows evidencing a kind of cross-platform palimpsest.