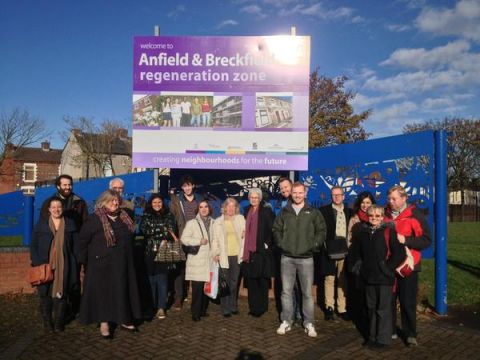 It starts at the Cunard building (built 1914-1917), through the entrance where the first class passengers would have come in before they boarded ships, decked in marble and sumptuous detailing. This could be for many reasons; to get people into the exhibition, for staffing, for parking and so on. I like to think it’s because of the history of the place and the fact that the tour touches on so many of the changes that have taken place in the city since this most prosperous time. It’s a sharp contrast between here and the empty streets of Anfield.

The tour guide is Carl ‘with a C, not with a K, that’s just weird’. He is a scouser born and raised in Anfield and his uncle Al is driving the minibus. It starts with business cards being handed out, both his and his uncle’s. It’s a simple detail, but it’s the small parts like this that set the context – the character of the local residents as a bit cheeky, irreverent and very open. We drive up around Leeds Street, past the YMCA, singing along (although I will admit, it’s a slightly uptight start from us passengers) to Madness ‘Our House’ as we head up to our first stop at Everton Park, making me think of my own home. Carl tells stories about his mum and introduces bits of Liverpool ‘here’s some of Liverpool’s (traffic) lights, but there are other colours other than red’ – he’s an LFC fan, obviously. I am giggling the whole way.

We stop at Everton Park and survey the whole city from this amazing vantage point. We look at pictures of the landscape at various points in the last century and learn how the topography has changed during that time, through construction, demolition, and the tearing apart of families by sending people to Kirkby and Speke. I don’t know how it was for the other people on the tour, as I already know a lot of this history (and it makes me incredibly sad and angry what’s been done to communities in Liverpool), but it’s not that funny anymore.

Back on the bus Carl puts on ‘Back Buchanan Street’ a folk song from the 60’s, although only for a minute or so and my eyes leaked a bit.

We stop to take a group picture by a regeneration sign that has been on the same empty site for ten years and drive down the tinned up streets around Anfield, hearing residents heartbreaking stories about the managed decline of the area as part of the housing market renewal (HMR) policy. The complexity of the problems is made clear through the storytelling and this is one of the things that made the tour so compelling; it does not simplify the issues. We meet Bob, who tells us his story and then sings us a song – ‘This Old House’ and another part of Liverpool’s shipping legacy, the pub singers, is brought into the tour. He’s lovely and also philosophical about his 15 year experience of living next to empty houses and of kids breaking in next door and stealing the lead off his roof. I’m gutted for him, and also because I’ve seen how many houses are tinned up, and I know he represents many others. Tinning up houses apparently costs the council £100 per week, per house, which is clearly not economical and this makes everything worse again. There is something that scousers do (and although I’m not one, I do this too), which is to make light of things, and often the most serious things become the biggest jokes. It’s a way of coping and we see a lot of that on the tour – how people have coped during a long period of uncertainty and injustice.

We pass LFC and learn about the club’s role in the shaping of Anfield (often made out to be the bad guys, but again, it’s not that simple). ‘You’ll Never Walk Alone’ plays faintly on the tinny minibus speakers. The last stop is the road where Carl’s house is. All the houses on this street are tinned up and it backs onto the construction site for new houses. He stands on the low wall at the front and reads us a poem, written as if by the house, by his Dad. More tears.

At the end of the road is 2up2down. In the old Mitchell’s bakery, artist Jeanne van Heeswijk, commissioned by Liverpool Biennial, has been working with people from Anfield and Breckfield to think about their neighbourhood and its future. It’s been a two year project so far and they have been working on the bakery and two terraced houses next door, looking at the best way to develop those. They have set up ‘Homebaked Community Land Trust’ a co-operative to allow collective community ownership of the properties, and a co-operative business to reopen the Bakery as a social enterprise. We drink coffee and I have an incredible toffee muffin. The ice is firmly broken by now and we are met by Britt Jurgensen and writer Debbie Morgan as well as people from the Co-op. I lose track of names so there may have been more too. Discussion is passionate and you realise just how much work has gone into the project.

The Anfield Home Tour is probably the best thing I have ever seen at a Liverpool Biennial. It combined storytelling and the facts in a way that completely drew me in. The script and other documents can be downloaded (no, Carl is not real, although he is a local and you can tell), so please have a look. I couldn’t possibly explain it all anyway, or convey the depth of the problems in Anfield. I don’t think I can properly explain the intimacy and thoughtfulness of the tour either, and although I hear they are sold out, Carl did hint at some more dates being added, or a slightly different tour taking place in Spring 2013, so keep an eye out and prepare to have your heart-broken. You could always pop into the bakery though (details below)….

Anfield Home Tour was commissioned by Liverpool Biennial and was conceived and written by Jeanne van Heeswijk, Britt Jurgensen, Debbie Morgan, Graham Hicks and present and former residents of Anfield.

Song lyrics for ‘Back Buchanan Street’

Backgound on the HMR