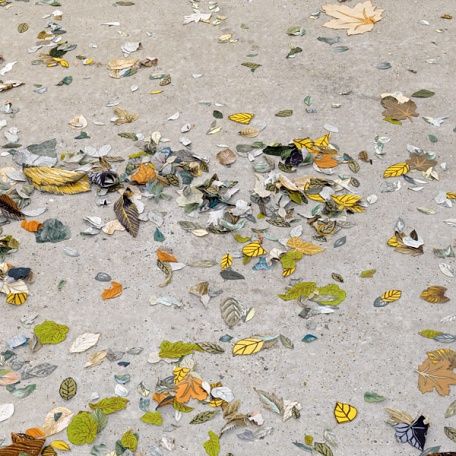 Lighting an open fire can be a tricky task, the flames don’t catch, the wood is too wet, the draft too inadequate to transform smouldering embers into a fiery furnace. I speak from experience. One fail-safe technique I have come to learn involves drawing the draft from the chimney flue by covering the hearth with several sheets of newspaper, thus (eventually) transforming a heap of cold kindling into a blaze of spitting flames. Anna Barriball’s video work Drawn (fireplace), (2005) surreally recalls the same alchemical experience, documenting a makeshift paper curtain sucking and sagging against a brick fireplace, as if enlivened by natural forces.

Similar transformative acts of drawing involving the manipulation of modest materials to produce uncanny affects can be found throughout Anna Barriball’s first major survey show at MK Gallery. Exhibiting works made in the last ten years only, Barriball’s characteristically slight aesthetic is reflected in the relatively loose curatorial approach, organising works across three ground floor galleries according to themes such as the spontaneous influence of natural elements, the ambiguities of perception and transformation of everyday objects via repetitive mark-making gestures.

In the Middle gallery Barriball’s billowing paper diaphragm in Drawn (fireplace), 2005 plays on a large flat screen TV, discreetly installed alongside works equally attempting to harness the most ephemeral nature element: air. In 36 Breaths, (2002) Barriball spreads spidery black skeins of ink across a found collection of family photographs, defacing a host of anonymous bodies and the memories they represent with her own breath. Her mark making has a child-like quality to it, almost naive in its method, and in some way echoing the erratic energy of Drawn (fireplace) opposite.Yet despite their spontaneous reworking, the images in 36 Breaths remain somewhat oblique, irrevocably distorted with the slightest of touch.

In the centre of the Middle gallery Barriball’s hand-made heap of Yellow Leaves, (2011) similarly make use of the volatile influence of air by inviting visitors to shift their incidental composition across the gallery floor. Presented as perhaps semi-accidental, or at least loosely manufactured interventions, this ephemeral series of works seem more like open-ended gestures emphasising the creative value of (inter)action, rather than any real production of meaning.

Motifs of interior spaces emerge throughout the exhibition in a variety of forms, somewhat latently in the second-hand curtains used to fabricate Yellow Leaves, but most explicitly in Barriball’s own ‘castings’ of domestic fixtures and fittings. Using a method similar to brass rubbing, Barriball painstakingly outlines the wooden surfaces of Door (2004), Brick Wall and more recently Shutters, (2011) on oversized sheets of paper, capturing in relief the scale and materiality of her own personal surroundings.

Paralleling both drawing and sculpture in their three dimensional construction, the vein-like grained surfaces of these objects, replete with bumpy wooden knots, chipped surfaces and battered edges, are superbly highlighted in the hardened metallic shine of graphite pencil lead. These aren’t merely hand-drawn traces, but rather textured imprints discerning the feel of the domestic home via trompe l’oeil impressions of its material faults and cracks, its brittle and tired surfaces.

Encompassing video, sculpture, drawing and photography, Barriball’s numerous modes of production are varied yet materially slight, and successfully elicit a wealth of complex affects. The resulting metallic aesthetic of these seductive silver ‘castings’ echoes in the iridescent surfaces of Copper Pipes, (2011) in the Middle gallery, again producing a trompe l’oeil illusion in the form of a pair of paper rolls licked in bronze paint and propped casually against a gallery wall. But it’s not just all about illusory surfaces, with notions of thresholds functioning as metaphors for transitions and reflexivity in her work.

In the Cube gallery Windows 1-10, (2006) a series of paper montages reveal cut-out images of windows and doors, hinting towards the way in which perception can be framed, but also new perspectives produced through physical portals. In the Long gallery another graphite ‘casting’ of a frosted bathroom window pane [Window, (2002)] similarly suggests the potential for alternative viewpoints, but conceptual reversals are at play here as Barriball’s textured rendering of the glass surface simultaneously obscures this possibility.

Mark-making is an intrinsic aspect of Barriball’s practice, with the artist employing repetitive and labour-intensive drawing processes to transform everyday objects into records of time, as evidenced across works installed in the Long gallery. Metallic tones return in the use of gold and silver pens to saturate the surface of a five-pound note in Money Drawing, (2000) and a map of the world in Silver Map, (2003). Their liquid shine blots out all pictorial content in order to heighten material texture and form, enhancing the soft folds and creases in the paper, the faint outline of continents in silver and a regal crown in gold.

Elsewhere linear pen and ink gestures accentuate the material structure of other mundane objects, from the shape and texture of a found plastic carrier bag covered in red brush strokes in Bag Drawing, (2000), or the crosshatched yellow shading of a metal desk lamp in Light Drawing, (2000). Silver Curtain, (2011) is less successful here, perhaps too flimsy and out of context to make much of an impact, particularly in the face of Barriball’s dominant series of seaside windbreaks coated in hours and hours worth of blank ink, which covers the length of the gallery wall opposite.

Although at times eclectic, Barriball’s choice of objects nevertheless emphasises the versatility of this medium, whereby any surface can be reworked through the simple act of drawing and subsequently transformed into an object upon which a primary gesture of expression and the accumulation of time is inscribed by the artist. Her economic approach to material production is visually austere, yet in spite of this slightness the intricacy of Barriball’s various drawings generates a wealth of complex affects that seek to accentuate discreet moments and phenomena of the everyday.