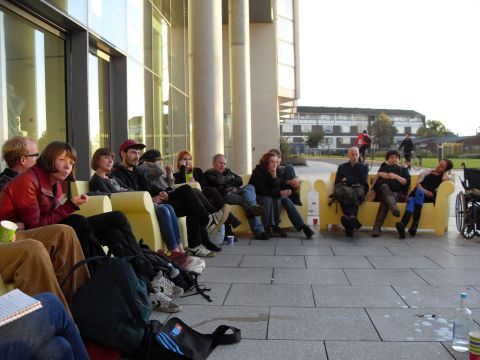 ‘Is school a place, an institution, a set of facilities, a situation, a circumstance, an attitude, or a constellation of relationships of the transfer of acquired, invented, and accumulated knowledge?’ asked Raqs Media Collective in their essay for the 2009 compendium ‘Art School (Propositions for the 21st Century)’; MIT Press.

Taking this meditation as a starting point, the Manchester visual art journal Corridor8 staged an Art School Alternatives symposium at Liverpool Biennial which proposed to explore alternative concepts and structures of learning to a traditional art school education, calling on practitioners and artist-led initiatives from around the North West to speak about their experiences.

Coming at a time when discussions, symposia, and books addressing the future of art education are prevalent, and given the title “Art School Alternatives,” one might have expected some artists to call for radical re-thinks or advocate courses of action, but a common thread among the speakers was that they all viewed their positions as distinct from the zeitgeist. The artist and writer Derek Horton made the very good point that most of these discussions on the future of art education take place within academic institutions and between academics – and as such, may feel irrelevant to artists working outside institutions who have practical considerations.

Dan Simpkins and Penny Whitehead from Disrupt Dominant Frequencies outlined how, through the process of applying for a Masters course, they had begun to question the system and opted out, and were evolving a communal practice that meant they could have an equivalent education outside an institution. This included setting their own (fluid) semesters and organising research trips – actually mimicking the structure of the academic year. Horton suggested that the priority of most of these practitioners is to try to recreate what institutions offer in the way of critical dialogue, but without the debt at the end of it, whilst artist and educator Andy Abbott argued that much-used phrases “DIY” and “artist-led initiatives” are often employed simply to mean “non-institutional,” and signify an ethos rather than a practical approach.

Harry Meadley posited that traditional art school allows students to get used to institutional structures and problems, which are useful beyond graduation and into the real world – an invaluable education, as the presentation by Department 21 illustrated. Graduates of the Royal College of Art Bianca Elzenbaumer and Fabio Franz explained how they had set up an interdepartmental, cross-disciplinary, social workspace – Department 21 – within the College after finding that all the departments were insular and uncommunicative.

Some of the artists’ positions were underpinned by ethics, but in the main, the discussion wasn’t about how to avoid an institutionalised art education, or utopian models of pedagogy, but was focused on much more expedient issues, such as economic considerations in light of the recession and the fact that formal qualifications are no guarantee of employment. Although many of the practitioners had evolved their work in response to a localised problem or crisis that they perceived in relation to institutions or “the system,” there was no common feeling of crisis under which they had assembled for the symposium. Instead, the day progressed more as a varied collection of presentations of different interests and different ways of working, and had a refreshing plurality of voices.

With the aim, perhaps, of steering such diverse threads back into the discussion, Derek Horton reiterated on several occasions that there needn’t be a polarisation of art schools on the one hand and “alternatives” on the other, and that the important thing is “trying to find ways to do the things you want to do, whether within the system, without the system, or however.” Perhaps feeling suffocated by such expressions of tolerance and equability, an artist from No Fixed Abode collective pointed out in the Round Table discussion that we had yet to mention the content of our curriculum, self-imposed or otherwise: “All this talk about learning, about pedagogy – is just the fact that we are learning really enough?”

It was a good question, and unfortunately one that we barely began to address in the symposium – although as the discussion’s trajectory very much followed the will of the audience, three-quarters of whom were participating as speakers or leading workshops, it would be reductive to see this necessarily as a failing.

The afternoon session was devoted to presentations by artists whose practices are based around communal, collaborative, and social activities, as opposed to having developed in response or reaction to an art school experience. Kate Rich presented her ongoing project ‘Feral Trade,’ in which she trades a range of consumable goods via social networks with the aim of taking responsibility of one’s own imports and exports, and explained, “All this knowledge and discussion is very well, but where does the actual money come from? Otherwise we’re in a strange volunteer profession.”

This interesting talk aside, these presentations functioned more as “show and tell” stock Artist Talks, and it proved difficult to locate their relevance to Art School Alternatives. Heath Bunting presented the “adventures,” involving climbing and raft-building, that he organises with friends, fellow artists and strangers, and which blur the boundaries between everyday life and art, even to the extent that it wasn’t clear what Bunting himself considered them to be.

If the symposium’s aim was to share information and experiences among artists of the practices people are involved in ordinarily and not in response to a current trend, perhaps habitual Artist Talks are perfectly appropriate, but some of them would have benefited from a little extra contextualisation so as to allow outsiders way in. It was, on reflection, very much a meeting of “insiders,” with practitioners composing most of the audience, and – just as academic discussions may be conducted from the ivory tower, so these conversations were distinguished by their grassroots origins.

Issue 2 of the annual visual art journal Corridor8, entitled Strange Weather, will be released on 25 October with a launch at Liverpool Biennial Vistor Centre. It is available, book bound, from art bookshops and online at www.corridor8.co.uk

Jac Mantle in based in Glasgow. She writes about contemporary art and culture.