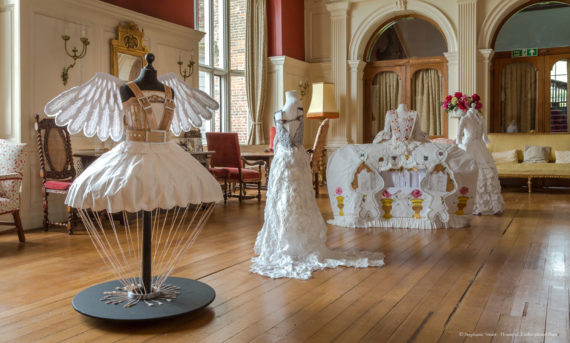 Perhaps I’m unusual as a visual artist but when I visit exhibitions I crave words; and usually I’m frustrated by their absence. In May I had a solo show. The venue was unusual, no white cube this was a Grade 1 listed Elizabethan mansion and the work was the result of my residency there. History, story exuded from the walls, the works, I was told, said so much and yet still I had a page or two of text beside each piece, a book for sale, explanatory films playing in the background and volunteers on hand to help me answer contextual questions; and most, not all, of nearly 1,000 visitors read or absorbed everything available to them. Some spent hours going from work to work, moving around the single room, stepping back, stepping in, looking, reading.

Interesting new contacts are often made at ones own exhibitions and this time I was extremely fortunate with who I met. One of my volunteers, an arts journalist, offered me a room in the flat in Venice she would be renting in September so as to report on this year’s Biennale. I’d never been to Venice and had longed to visit the Biennale, so, last month I headed out there, explored the city, visited the pavilions, viewed the art. The former was everything everyone says it is; the latter simply left me frustrated.

What I’m actually craving when I enter white walled spaces and look at the objects before me is, of course, context; and there may be more inventive ways of presenting this than simple blocks of text. Critical comment and journalistic or biographic writing about art and artists is available all over the place but reading up beforehand or afterwards is something other. Every art work proffers its full impact only when it’s there in the room and it’s at that moment that I, for one, want to understand it, so as to engage with it fully. To this end, I’d like to be introduced to the philosophy that gave birth to it and to track the passage of an artist’s thinking but rarely am I given the chance.

It was the 20th century novelist Marcel Proust, I believe, who described the “true” artist as a “visual philosopher.” As an artist I recognise this ambition in the work of many others, just as I strive to live up to it through my own practice. Rather than critics, academics and my compatriots, I’d like the viewing public to have the chance to really understand this likewise. No doubt we’ve all heard comments such as “I…” [or worse] “my 5 year old could have painted/made that…” by individuals viewing certain (usually) abstract works of art. Equivalent VIII by Carl Andre bought by The Tate in 1972 and often described as “just a pile of bricks,” is one of the most famous examples of a work that provokes a bemused, confused, irritated response. But there were pieces in the Arsenale and Giardini this year that, I confess, I felt similarly turned off by.

I hope to intrigue viewers of my work through means of technical ability, beauty, story and concept. That said, I understand the remit of minimally constructed work and of that which appears ugly or challenging to look at, but I have an arts education. What I can’t forgive is leaving the general viewing public alone with objects they may well have seen before in other, more mundane contexts, lacking the story (the concept) by which that work’s placement in the space before them is deemed justified. It’s exactly because of this that the art world comes to seem to many like a closed shop. Some think the self-proclaimed experts involved in the process of selling art are somehow in the know, others conclude they are simply being fooled and self-perpetuating an emperors new clothes valuation process.

labiennale.org states that some 500,000 people visit during the 9 months that the art’s on show. 48hr tickets are sold at a cost of 30 euros. Visiting is an investment and people want artistic experience. This year La Biennale di Venezia has been offering discounts and assistance to Universities, Fine Arts Academies, Higher Education Institutions, and Research Centres. There have also been open table events going on at certain scheduled times. But if you visit as part of the throng at any other time and want to be helped to extend the remits of your own thinking really you are left with little to hang on to.

This is not a unique situation. In the gallery context at large there seems to be the general consensus that artists providing full textual explanation alongside their art would be as much of a faux pas as were a working scientist to write passionately about their own belief in God. And I have to wonder where this started. Does it stem from the days when the general populous couldn’t read but could, apparently, interpret the images shown in a stained-glass window? Claiming, today, that “the artwork should do (all) the talking” is, I believe, something of a cop out. Arguably intricate technical skill speaks for itself, even if all it says is “like-as-not you’ll be impressed by me,” and yet still I’ve witnessed audiences appear to lap up extra explanation regarding how a work was made. When it comes to pieces, about which the concept is meant to be the primary focus, I think artists (with the support of galleries) ought to offer people as many ways in as possible.

I believe in crediting the general population with intelligence and curiosity and the willingness to learn. I don’t think that science on TV, for example, should be dummed down but neither of course do I believe we ought to throw phd level maths at people and expect them to cotton on. Likewise I believe art appreciation ought to stretch people but that there needs to be available, beside actual works whilst they are on show, tools and methods to aid the ambition of greater understanding.

Read a descriptive paragraph about (or the last page of) a novel and your interest may be peaked but there can be no deep engagement. To that latter end you’ll need the entire 300+ pages, you’ll need character and plot development. Why is there a different standard for art work? Why do artists tend to proffer only their conclusion? Certainly whilst studying I had artist peers who resisted the written parts of our degree course, claiming their skill lay in making, not in writing; but I’m not sure this word reduction wholly stems from artists. I’ve shown in many group shows and have only ever been allowed to provide the most scant written detail. Often galleries allow simply a paragraph from an artist’s general working statement to be placed beside their piece, perhaps with a list of the materials involved and a title.

At the Biennale something of this sort was largely the case and the friend I was with stopped reading after finding the first few such offerings decidedly un-engaging; as did I. As I’ve said this is an issue I’ve made note of over many years, in large and small galleries alike. I don’t therefore imagine that there were statutory limitations in place in this instance. The Biennale’s website states that their ambition is in fact that: “La Biennale…present itself as a place whose method – and almost raison d’être – is dedicated to an open dialogue between artists, and between artists and the public.’ The amount of explanation on offer on this occasion seemed to depend on decisions made by the team arranging each country’s exhibit. An exception, the USA pavilion provided guides with knowledge of the life of their chosen artist (Mark Bradford) as well as his working methods. Because of this my interest was captured regarding a piece I’d otherwise have resisted, I was shown part of the exhibition I’d otherwise not have noticed and I saw my friend utterly inspired. Elsewhere what I wanted to read was, at least: “when I saw…I was inspired to…this lead me to explore…etc…and here is the result of my thinking…” I wanted to be helped to be drawn into each artist’s research and their inspiration, to watch the flight of their thought and to engage with the detail of the design process and making. Ideally I wanted each artist themselves there telling me such stuff but otherwise I needed it in some way communicated.

Of course some people will always want simply to look at and personally interpret an art work and that’s as it should be. But at my exhibition in May I deemed it important to offer up the written conversations I’d had with the people who’d inspired the work + details of my historical research and my reasoning regarding what inspired me to make clothes from paper in the first place; such a strange occupation as this might seem to others to be. And the comments, and gratitude, I received were mind-blowing.