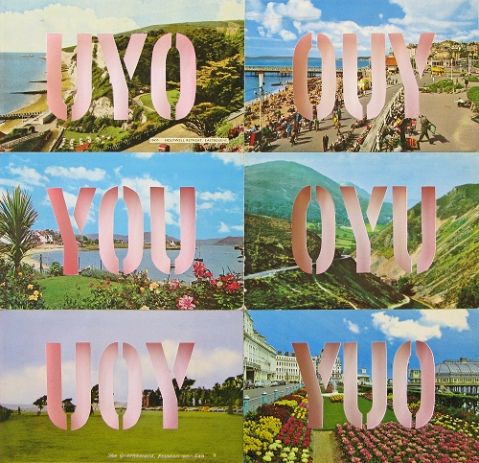 Often, of the two exhibitions that tend to open at Spike Island simultaneously, it is the smaller one which is the most interesting. April’s offerings are no different. In the main Gallery is Dewar and Gicquel’s exhibition Crêpe Suzette, projections featuring clay morphing Roman-esque animals and men in constant animation. There is a good wooden dog wearing sports socks next to another curved wooden shape that, as was debated in the pub later on, could only be a butt plug. Turn left instead however, as you enter the gallery and you will get to The Artists Postcard Show, neat and much more succinct.

The postcards in this show come from the collection of author and novelist Jeremy Cooper. Cooper, aside from being an avid collector is also responsible for the recently published book Artists Postcards: A Compendium. The show ‘begins’ with Julie Cockburn’s Always You (2010), different spellings of the word ‘YOU’ cut out of seaside postcards; Frinton-on-Sea, Holywell Retreat, Eastbourne. The cards are mounted in front of a pink background so the text displays the colour beneath, a mini postcard installation, introducing you to the idea of the artists’ postcard in its expanded form. Seaside postcards feature in several of the works; Ray Johnson, Christo’s wrapped up Ocean front, Newport, Rhode Island (1974), Richard Hamilton’s Whitley Bay (1965) and the brilliant To Mother (1968) that uses a postcard with a lift-up flap. In Hamilton’s work the flap reveals a drop down set of images of one of one of the scenes on the sepia coloured beach – ‘The Sands and Promenade at Whitley Bay’ – as your eye travels down the concertina the image focuses and focuses until the scene is isolated into two main black splotches, the too close-up remains of a dog playing on the beach.

Another key work using the Seaside postcard medium is Susan Hillers The Flying Spray, The Feathery Foam. Addenda 1. Section 3 (1976) – a small selection from the Dedicated to the Unknown Artist series. Depicting rough seas from around the coast line, the cards are set around a chart marking them up with little black typewriter x’s as to their individual characteristics, medium, format, colour, presentation. Having seen the full large scale installation Dedicated to the Unknown Artists several times I am surprised that such a small set from this series can still hold as much strength as an artwork in it’s own right. Seaside cards will always be a popular choice for artists using this medium to play with. The first postcards were plain white, used solely for written messages until 1889’s Paris Exhibition, where the first full colour souvenir cards were printed of the Eiffel Tower. The popularity of the seaside holiday as industrial escape during this time in England meant that the popularity of these new souvenir cards soared. To many the Seaside card will always be the classic postcard. The line linking the souvenir postcard to the art gallery has also always been a strong one. As the guide rightly points out in referencing Filippo Caramazza’s card, a painting of Gerhard Richter’s Betty (1988) ‘(it is) referencing the postcard’s role as the way that most of us remember works of art, with favourite images pinned up on walls.’

The exhibition is without labels. There are laminated marked up sheets with the numbered placement of cards, artist and dates available for those who ask. This is very confusing. Four walls marked A, B, C, D and display cases E, F, G, H, I each have their individual sheets but the actual cases or walls are not labelled either. The guide tells you briefly that the cases are themed ‘Concrete Poetry, Art Activism and humour, as well as groupings of works by individual artists including Richard Long, Frances Alÿs and Jan Dibbets’. On first viewing I managed to miss most of these groupings aside from Richard Long whose poetic black and white card of a train next to the coast and the text ‘Porridge, Bacon and eggs, toast and a pot of hot tea’ is one of the best in show. Overall, I would have liked some clearer information.

Artists’ Postcard Show includes the work of over 136 artists, covering a lot of ground. There are sections dedicated to Art & Language, the image Bank Postcard Show’s, Vile Magazine and several of the FLUX Post cards. It also makes an effort in several of the works on show to involve audience interaction. Ryan Ganders Of Any Actual Person, Living or Dead (2001) postcards can be rifled through and limited edition cards with a simple black line drawing by Daniel Eatock can be taken away. This re-enforces the perspective that these are not just artefacts of a tendency but an accessible, ephemeral artistic medium, still very active today. It also feeds into the gallery visitor’s greed, if I had been more attracted to the line drawing I suspect I would have taken a whole stack. I remember the At Sea exhibition at Tate Liverpool in 2001 where I took enough wave posters from Felix Gonzales Torres’ stack to wallpaper a whole side of my teenage bedroom. Perhaps other people have more respect.