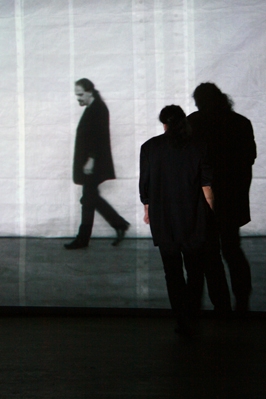 Tajber wears black and stalks precise sweeping rectangles around a table. Parallel to this, the same scene is projected onto a white screen as a vertical mirroring. Hence, a set of vertical and horizontal axis points are plotted in preparation of forthcoming events and actions. Care is taken as a pair of white gloves are pulled meticulously over fingers and hands. We await a kind of autopsy – an exploration not of the usual kind…but a dissemination of time, space, objects, body and the infra-ordinary symbiosis existing between these elements.

Tajber has engaged in performance since the 1970’s, sporadically working with the table as a friend and object to explore an acute awareness of the body in conjunction with a deep contempt for the circumstances, bureaucracies and establishments which plague and agitate collective and subjective consciousness.

The table is slammed and noisily pushed, pulled and scraped around the space. A multiplicity of positions, permutations and geometric shapes are explored. Turned upside down, carried upon the shoulders, treaded over and stamped on by heavy black boots. Chairs join the scene and are clattered against the surface of the table. Hands grip, shove and spin producing a series of repetitions and differences. Opposites and uniformities occur in concurrence and resistance to a mediated model of simultaneous actions. Shadows interface these conflicting forms which resolve into an impossible oscillation between terminals of the mediated and the live image. The live derives reference from the mediated, which in turn derives authority from the live until the poles eventually contract and collapse into each other. It is only in a manipulated reversal of the mediated image that an implosion is avoided. Predictive movement is side stepped as kinetic flow is ruptured by Tajber’s technological sleight of hand.

Tajber is working hard. Beads of sweat appear on his brow as clinical and circular movements become more complex and the generated structures even more critical. Effort and inertia combine with force and stasis to shift the sonic and the visual to the visceral and cathartic. A crescendo of movement and deafening sound collaborate to produce a terrifying distortion which generates an eventual release and a weariness. The gloves are pulled off one finger at a time. The exercise has reached a temporary conclusion.

The thresholds between the physical, mechanical, technological and teleological processes surrounding Tajber’s work enable an understanding of action and spectacle in relation to temporal structures. The spectator is endowed with an array of organsing fictions and realities that engender a series of holographic bodies enabling new frameworks of representation, re-representation and performance. A physics of geometry versus a psyche of memory thus becomes the means by which ‘mediatised representation is naturalized according to a simple logic that appeals to our nostalgia for what we assume was the im-mediate’. (Philip Auslander: Liveness).