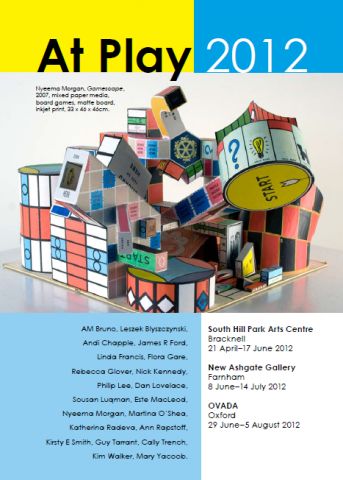 You wouldn’t automatically think of Bracknell as a hub for contemporary art in the South East, however it must be said that South Hill Park is a diamond in the rough. At Play exhibition, now in its fourth and final year, has traditionally brought a touch of mischievous fun to South Hill Park and this year was no exception. The exhibition itself features a broad range of work from drawings, installations, video works, interactive games and puzzles, along with a range of performance works (only on private view opening).

The exhibition begins in the Mirror Gallery, moving through the space you begin to notice that the floor is not just simply a standard parquet floor, artist Mary Yacoob has created an unusual and eye-catching floor piece. Working with maps of the room she has created pathways using brightly coloured strips of tape on each individual wooden floor tile, looking closer you start to see that each different colour takes a journey from one point in the room to another. I am informed that working in this way was an exciting challenge for the artist, having never made a work of this scale before.

A key feature of the exhibition is to challenge and push the artistic practice of the exhibitors. James R Ford’s colourful drawings Filling the Voids compliment the other works exhibited in the Mirror Gallery. This space could have easily looked crowded had the works not been selected so carefully. Shapes, pattern, symmetry, rules and obsessive compulsion to complete tasks are the features emanating from the first part of the exhibition.

At Play continues upstairs in the large Bracknell Gallery, the distance between the two galleries is a frustration during busy periods. There is a great range of work; performances, drawing, video and interactive puzzles and games.

Throughout the private view, Andi Chapple invites audience members to play the gallery using chopsticks and can later be found appearing as an absurd party entertainer, blowing up balloons only to let them whizz off around the audience viewing work. Later the performance takes on a very different tone as he approaches individuals and gifts them with a gold star balloon, they all move about the space with stars floating above their heads eventually to come together in an improvised form of group embrace. The spectacle is enticing, gentle and playful, reminding us of the innocence, experimentation and fun of play.

Whilst Cally Trench’s Shopping Spree board game takes a whimsical look at consumerist culture and its tragic outcomes, players are ambushed into buying goods regardless of their desire for the products.

Other works included Personal Puzzle an almost impossible interactive puzzle made entirely of black pieces by Leszek Blyszczynski. Flora Gare creates translucent castles lit up with nostalgic images trapped inside with her work Castles in the Air.

Guy Tarrent displays items confiscated from school children collected over the past 15 years of teaching. A truly fascinating collection of all manner of distractions, ranging from innocent paper planes to the more sinister makeshift weapons. This work highlights the accessories of play, noticing trends of popular items and activities shifting to more un-playful and worrying activities, including violence, self-harm and a preoccupation with diets and physical attributes. Being confronted by all these items at once forces the viewer to connect and engage with what is going on behind school doors and perhaps even start to question why such extreme behaviour is occurring more frequently among children.

The final live performance invites audience members to reconnect with their physical selves, the challenge of endurance and the silliness of play, with Katherina Radeva taking viewers slightly out of their comfort zone when performing Kitty has no pity – the art of not giving up. Taking place in the Garden Room next to the Mirror Gallery, Kitty warmly welcomes her audience addressing them as her darling boys and girls as she saunters about the room directing and sometimes flirting with the participants as they gather around in a circle. Once everyone is in place the audience discover varied objects at their feet, such as party hats, noise makers, balloons and hula hoops made from straws, they are informed that these are objects for exercise. Kitty proceeds to lead the audience in a form of bizarre exercise class that feels delightfully reminiscent of a children’s party. As the room starts to feel more and more chaotic, Kitty invites her darling boys and girls to take a rest and sit down as she embarks on reciting a moving and reflective monologue about her childhood dream of becoming a gymnast whilst hula hooping in the centre of the room.

Kitty has no pity, the art of not giving up was a delightful conclusion to an intriguing and engaging exhibition opening for At Play 2012 At South Hill Park in Bracknell.

The exhibition will be touring to the New Ash Gate gallery in Farnham (8 June–14 July 2012) and then on to Ovada in Oxford (29 June–5 August 2012) encouraging audiences to come out and play across the South East.

At Play 2012 is a project in partnership with the New Ashgate Gallery, Surrey, South Hill Park, Berkshire, and OVADA, Oxfordshire, exploring concepts of play and participation. At Play iscollaboratively produced and curated by Dr Outi Remes and Cally Trench. It is supported by The Arts Council England.