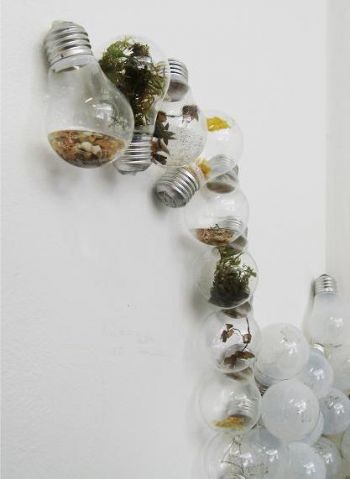 Okay, so, it's a good job I'd suppressed my hunger before entering this degree show. Unlike the expected sights contained in an exhibition, this was one of work varying to such a degree that, surprisingly, it (literally to some extent) stimulated appetite, only to instantaneously choke ones taste. In this show of binary oppositions, I was left somersaulted from enthused to bemused, ambivalent to acquisitive, and finally, gluttonous to glutted.

Upon entering a dark corridor, I was met with a distant glow of beclouded light. Following a scent of what only could be described as …lunch… I discovered what appeared to be an azoic life lying, peacefully, on a table. Upon closer attention, the shell of this life-sized inanimate body, and the source of the smell, was in fact burnt bread, or indeed – toast! Filling the room with an homely scent, Sam Read-Jones's aptly named ‘Ascension' echoed the creation of life, through the baking of a food that helps sustain our being, whilst simultaneously holding the idea of the ‘ascending' of the soul from a body, as the bread naturally sinks and ‘decomposes' as if releasing the inner self. Combined with the subdued lighting, the homely smell of the eerie sculpture makes one feel at peace with the work, as you pay respects to the entity laid in front of you. So, after being drawn to a piece of work by a smell that makes your senses tingle, what should one think when faced with an image of death? Perhaps, without the smell and in some senses symbolic material it was made from, we would find the holy corpse disturbing? But no, instead, leaving the room with a feeling of security and peace, as if leaving Grandma's kitchen after an afternoon of cake baking, becomes somewhat plausible, and fitting. Ambivalently confused, yet surprisingly convinced, I left feeling warmed by the thought of a dead figure being shrouded in such comforting prophecy.

Turning a corner, and in a mentally disorientated state regarding the surreality of the previous sculpture, I was suddenly propelled back into an opposing position of freshness and rejuvenation. After leaving the dark room and entering a fresh white corridor, feelings of life and hope instantly grew. Light-bulbs formed the unique work of Loucia Serghiou. How do these represent life, I hear you ask? Well, sprouting through upturned bulbs – perhaps metaphorical of natural bulbs – were fertile growths of green grass. Neighbouring the life filled glass were bulbs that held the ocean. Fragile shells swam in a pool of water contained inside the delicate microcosms of the oceanic world. Moving to the third bulb, one expects another vision of purity and flowering proliferation. However, an abrupt holt to ones thinking became a necessity as these fertile bulbs became filled by the corpses of mealworms. Suddenly we are hurled back to face the contradicting feelings formed in the work of Read-Jones. Sitting alongside life, as if a natural sight, was the death of nature itself, encapsulated in a stagnant world. It appeared that these contradictions of life, death, purity and pungency, were becoming a running theme threaded in the intricacies of this degree show? Or perhaps, these two pieces of work were just cleverly staged next to each other, so that our emotions were tossed from one platform to another as we tried to figure upon which theme we should lay our thoughts?

Travelling down steps, and to the next piece of work, I pondered what I would find. Would I again be faced with an emotional spin of delight through to disgust? I feared what I entailed, yet I was greedy for more. ‘Furnishing' many senses, Nottingham Trent University's Degree show certainly hosts an extreme range of work. Surprisingly, the next piece I found – a large scale sculpture – was drastically different to the two pieces of work seen previously. Made from wooden chairs, this extreme contrast from the claustrophobic exhibits previously witnessed was supplied energy from its immense scale juxtaposed against its delicate, skin-like exterior. Whilst it didn't trigger my emotions to such a degree, Anna Stippa's ‘Self Inhibited' suggested the diversity of these artists' work.

Upon leaving this sculpture, I was met with a black curtain. ‘Enter one at a time' I was ordered. Intriguing! I entered, and inside Sarah-Jane MacDonald's ‘Room' was….well, maybe you should find out for yourself! Nottingham Trent University's degree show is certainly worth a look, hosting a vast variety of work to trigger questions, spark your senses, and make you hungry for more!