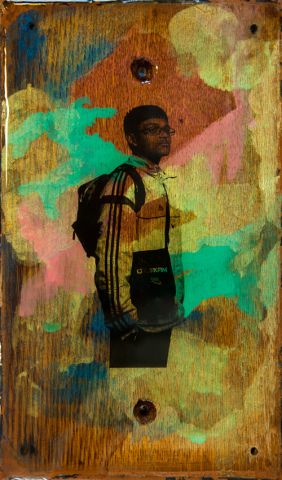 For the past few years, Shiraz Bayjooʼs work has been exploring collective identities and the symbols, flags and emblems that groups use to represent themselves. This ongoing exploration has seen Bayjoo compiling motifs, myths and narratives that have cultural, political, social and religious resonances, to create visually rich displays that speak as much of the history of painting as the cultural and political histories that they reference.

In his new installation at Whitechapel Gallery, Bayjoo has brought together the
formal and thematic elements of his practice to create The Bow Boys Archive; a
work generated and researched during his artistʼs residency at Bow School of Maths and Computing. Composed of archive images, portraits of the students, news footage and a barricade of abandoned household and office furniture the installation is as much a contemporary reworking of a history painting as it is an
archive. The history painting and the archive function in similar ways, to document histories that shape and form the identities that preserve them.

A map of Londonʼs battlegrounds emerges from the images and footage,
signalling where nationalism in its multifarious forms has threatened the rights and lives of various migrant groups. The battle of Lewisham, the Brixton riots, the battle of Cable street, the Southall riots, protests against racist housing policies, protests over housing conditions, to name but a few; set the scene to this composition. Paintings are literally cast across parts of an improvised blockade, as if thrown or daubed on the furniture as graffitti. Incandescent colours glow through resin membranes to project protest images of the Anti-Nazi League and the National Front. Elsewhere we see a militant band of police officers emerging from a set of drawers, their uniformity blending their singular militant body into the horizon while a TUC conference buzzes in full Technicolor on a toppled cupboard. A gun aimed at a policemanʼs back hovers awkwardly in the hands of a young boy and groups of protesters stride with linked arms and a sense of pride in their solidarity. These groups of figures combine with sounds of the news footage to present something akin to a 21st century Hogarth.

Within this tableau is a gathering of young men, a series of portraits of the students at Bow School. They observe the situation calmly, contemplating their own positions within this set of narratives. These particular observers have in fact collaborated in constructing this archival scene, when asked to find images that
they felt represented themselves in the ʻgreat history of humanityʼ, they returned
with images of protest. Their own investigations into the migrations of their
parents and grandparents returning experiences that often differed much from
their own.

Bayjooʼs treatment of the dialogue between the different pieces is delicate, wary of prescribing positions or leading us into easy assumptions about where the young men of Bow school sit in this narrative. But in the lead up to the Olympics where we see ʻbrand UKʼ boasting of pride in Londonʼs diversity, some awkward questions are posed by the lack of mainstream visibility in retelling of these antinationalist histories. Bayjooʼs attentiveness to their significance is both refreshing and appropriate at a time when group like the EDL still choose to try and march through Whitechapel in Mosleyʼs shoes. The Bow Boys Archive as an installation, a document and perhaps as a history painting is a deserved and thoughtful homage to these anti-nationalist histories, and Whitechapel, perhaps, the ideal site for its exhibition.