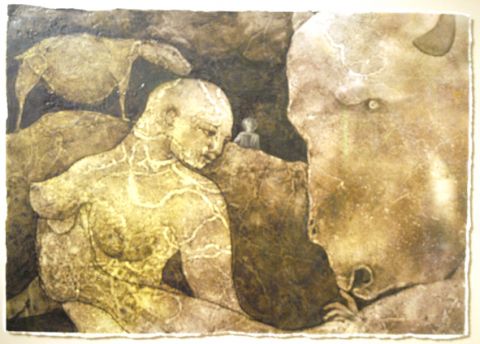 ‘Beta artists present work that draws on themes of transience and explores the nature of exhibition in the contemporary gallery.’

That suffering is transient is a trite observation in relation to the pain endured and courage needed to deal with the consequences of a hand trapped in a garage door. Julie Mecoli documents through a slideshow of drawings, the therapeutic path that stretched out from her initial misfortune. She writes of the cracking sounds she heard as her hand was crushed, a description of nerve-scraping power that accompanies the drawings charting the recovery processes.

She shows also a pre-accident sculpture of a simple house form, (currently 3cm x 2cm x 6cm) made of bitumen, a material that will shatter if struck a hard blow but will also gradually soften and sink into itself. One way or another are we all bitumen?

Kathleen fox shows Scare Owl (for voles). A freestanding fetishistic female figure made from owl pellets, it incorporates many of the vole bones found in the pellets. It is a delicate piece and therein lays a problem not of its own making, as it were. It is displayed in a Perspex case. Placing a work in a transparent box transforms our experience of it. The work inside remains in view, but out of reach, our encounter now played out through a sterile barrier. The psychological space in which the experience lives is changed. The box distrusts us, rejects our closest attention, teases us. “Look but don’t touch.” intentionally?

Of Matt Rowe’s works, Mummers Ghillie and Bad Omen, which incorporate PVC Fly screens and VHS horror-video tapes, the text tells us that ‘Mummers Ghillie is an attempt to represent a heroic landscape on a limited budget.’ hinting at comic incompleteness. The purpose of a Ghillie suit is to render the wearer unseen in a landscape. Those in Matt Rowe’s videos are eminently visible. The apparent contradiction between purpose and effect follows what might be his stock in trade of serious tongue-in-cheek. His ghillies in Mummers Ghillie (….a decorative suit and action investigating the ritual of defense and concealment, death and resurrection.’) and Bad omen are betrayed by the appearance of inoffensive shoes and loose-fitting trousers Like an uncle out with the kids for Trick-or-Treat the figure in Mummers Ghillie waits not quite knowing what to do next, or maybe saddened by the futility of it all, whilst battlefield smoke drifts past. The video was made’…within site (sic) of an 18th century Napoleonic fort in Kent, rumoured to be the birthplace of the modern British Army….’

The most straightforward statement in the show is that of Paul Sanders, who ‘…is an experienced and passionate landscape photographer. Recently this has led him to capture the fleeting, transient and ethereal natural phenomenon of the Aurora Borealis, or Northern Lights.’

Kathleen Fox’s ‘Bag Angel’ is initially puzzling, consisting of a DVD video of what could be of a fish or some kind of intergalactic whale viewed in a wall mounted box through an eyepiece reminiscent of those on end of pier mutoscope machines. The front of the box is covered with rabbit fur, found at a boot sale. Meret Oppenheim dresses ‘What the Butler Saw’. Did he ever see such an Angel?

Paul Sanders’ images of the Aurora Borealis echo Fox’s Bag Angel. They have in common serendipitous convergences; a plastic bag wafts in water, solar particles twist and turn in the magnetic ebb and flow of the North Pole’s magnetic field.

Occasionally a leaf appears, green in the black space of Bag Angel’s Heaven, a clue to this world amongst the white marks of distant stars; an ectoplasmic whiteness hovers in front of the creature. The soundtrack made by Fox’s son from the sounds of resonated wine glasses containing water envelops the space with a sound of mourning? Particles escaping the sun and a plastic bag escaping the orbits of consumption resonate temporarily through their images, across a Sevenoaks gallery. Fox uses mud from the river Darent in ‘Mind the Gap’, and ‘Cock ‘n Bull Story.’ Poured over paper, organisms that found themselves involuntarily transported to her studio wander the surface leaving trails in the mud, trails which become stimulus for visual invention. Those that do not die in the process are returned to the Darent. What stories they might tell! On her Axis page, the image is titled ‘Cock and Bull Teaser’. ‘Cock ‘n Bull Story’ on the other hand is an unintentional titular evolution, creating a different space of engagement to that of the sexually tinted original. There are descriptions which might apply to all creative endeavours. Karl Farrer ‘…regards failure not only as an imperfection, but also as something that will lead him to unpick, dismantle or disintegrate, then to rebuild and reassess.’

Despite Farrer’s refusal to ‘adopt a signature style of painting, there is a filling – in – painterly – brushiness about his work that might indicate a self if not a signature. ‘Manmaid’ is a painting that I found difficult to see, or should I say read? What appears to be a black base colour has painted on it a surface involving a repeat pattern of dried leaf shapes, perhaps on a woven cloth, which partially obscures the image of a person, maybe the Man-maid of the title-or are there two people? Camouflage comes to mind and/or disguise. Does Man-maid question gender, propose a cloned hermaphrodite future? Farrer has added(?) linear representations of a bovine portrait ‘PoorCow’ to top right and left of the picture. Man as milk-maid? And at the bottom ‘Ralph’ the white rodent from his painting from the Lynn Painter Stainers Prize Exhibition 2010. the colour of the leaves changes according to underlying subject-matter. Some of the leaves are painted a kind of Indian Red. I like the Red.

Clare Smith’s wire piece is a work progressing, a developing conversation. She notes, “It is still malleable and the form not firmly fixed. It can be easily pulled out of its current form, whilst at the same time there is a sense of it moving into form.”- sentiments echoed in Adam Hanson’s oval shaped Sunset images, inspired by landscapes on the Isle of Sheppey. His three pieces partake of abstraction through the visual and textural surface qualities observed in the landscape. ‘Adam Hanson is inspired by the landscapes on the Isle of Sheppey. Fleeting, transient moments are documented and used as a visual record to construct work within the studio. Time is a strong factor in the work: works are built up over time. The surfaces change and reveal the past within them. Paint application is at times thick, at times thinned right down.’

Placed next to the gallery entrance is Franny Swann ‘s Collection Plate, of turned wood on a white ecumenical linen and lace cloth, placed on a modern table. In it is a collection of objects which visitors are invited to swop for something from their pocket or bag. The possibilties are endless. I once read of a poet who when he needed to buy presents for friends, chose things that he really needed himself; in the plate, a four-leaf clover. And when I return a few days later the clover is gone, its replacement anonymous in the dish.

Patricia Wilson Smith shows a mixed media piece consisting of photographs of beach and waves. Her drawings in four dimensions sit upon a shelf below the photographs, vessel like forms cast in thick white acrylic paint. which dry pigments – looks like Ultramarine, Prussian blue and graphite – have been dropped, one to each vessel. The piece will develop over the period of the exhibition in conjunction with a residency at Cape Cornwall, studying waves. It is part of an attempt to understand a dream which includes ‘..one wave that rises to a perfect peak, curls, and crystallises.’

Each encounter a becoming conversation, I feel uneasy with the whittling of the square pegs of statements to fit a proposal’s round holes. Meeting art is like meeting people-we listen – to the person, the work. What does it say? Have we heard it before? Do we detect pretence, acting the part, cover-up? Is it honest? We are drawn to this or that piece. What is that? Why is that? What kind of sense does it make? We consult the adjacent clues We read, conversation develops. “Oh yes, I see. Say that again.” ” I don’t understand. If that is what you mean, why have you done this?” We uncover context. Length and difficulty of conversation varies from piece to piece. Descriptions and explanations, whilst not part of the physical work can be a formative element in our experience.

And Love at first sight as well?