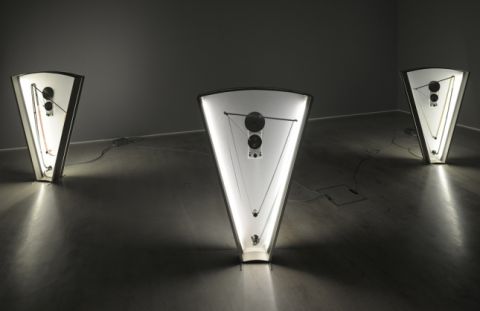 Fans of Minimalism will want to take a trip to the Turner Contemporary in Margate. The gallery currently has two exhibitions: Mass and Matter by Carl Andre and Subject to Constant Change by Rosa Barba (both 1 February 2013 – 6 May 2013).

What can I say about Carl Andre that hasn’t already been said? More importantly, what can Turner Contemporary (TC) say about Carl Andre that hasn’t already been said? TC focus as much on his poems as his sculpture – which is refreshing. They also point out that he barely made any sculpture while working on the railways, turning instead to hand written and, latterly, typewritten poems. Andre is quoted as saying that he does not aim to express him self through words when doing so, but instead he rearranges the words of poems into columns and rows in much the same fashion as Jack does in The Shining.

In focussing on this period in Andre’s career we draw parallels between his industrial labour (and that of his father, the ship yard where he grew up and so forth) and his sculptural works. It is my understanding that the point of minimalism is, through reducing the artwork to its bare bones, to make the viewer aware of their own bodies and their physical relationship with material (with mass and matter as it were). The problem with this show is that there are simply too many sculptures crammed into one relatively small room. Works are not allowed to breath, you cannot “experience” one material without another lingering in the periphery.

Andre famously remarked that as Tuner severed colour from depiction, so he wanted to sever material from form. And yet, responding to a question (in a video about the exhibition on the TC website) about his choice of materials Andre confesses that economics is the main fact as “there’s usually a budget involved”. What was a tediously forced link with Turner (because the gallery bears his name, because of a tenuous link between the artist and Margate…sigh) turns out to expose a major inconsistency in Andre’s oeuvre. Are the materials important or does he just go with what is available? Is the space around the artworks important, or does he just cram in as much work as possible?

Rosa Barba is not a minimalist but she is an excellent example of Andre’s legacy in contemporary art. At first glance we can instantly identify her show as having all the ingredients of a first rate contemporary art exhibition. It is well laid out with plenty of space between works, just as Andre’s should have been. In fact, it is puzzling that so much space was given over to Barba at the expense of the better-known Andre. The exhibition can broadly be described as sculptural video installation. Sculptures are made out of celluloid film, sometimes moving, run by small motors. There is a nostalgic cool about old film projectors and I am often surprised by how this continually captures the imagination of my students. In their case, it is a cheap medium to play with: old, broken, projectors and used or out of date film can easily be found at car boot fayres or from Freecycle. Barba does seem to be operating in the same way “playing” with the medium but she goes beyond this simply in terms of display. Everything is exquisitely made – the fittings, the “vitrines” that house some sculptures. Her three largest pieces – a floor to ceiling laser cut text with a movie projector casting a beautiful shadow onto the wall behind it and, in the other room, text on several moving celluloid moving films and a large projected film – are all installed in a manner that would make Donald Judd proud. The back projected film falls on a large screen set in the centre of the room which reeks of minimalist cool.

But what about the content of the film? We are told that it was filmed in Manchester and Kent because…it will be exhibited in Manchester and Kent (sigh…). The propensity for linking everything to TC’s geographical location, or through this to Turner himself, is becoming evermore disappointing and unoriginal. It seems that artists are forced to make connections that seem, well… forced. Carl Andre’s only connection was through the quotation about Turner but one has to wonder about his commitment to a show in which he is in included (because of a sound-bite nod to Turner?) only to be crammed into one room. Perhaps the allure of his first UK solo exhibition in a public gallery for 10 years was too much? As with Andre, it’s all about the display to the detriment of the content for Barba. In the same film about the exhibition I mentioned above, Barba dodges a question from a kind of focus group about the show (a way of engaging with the “locals” and to prove that TC has value through social and economic regeneration) by admitting that she doesn’t have all the answers. Why? Because there are no answers. As with Carl Andre, Barba is “not a conceptual artist” and there are certainly no mysteries (mathematical of otherwise) behind her work at all. Simply, what you see is what you get.

Barba deconstructs the physical elements of film, but to what end? We are supposed to consider the end of the industrial age and the transition to the digital age and Barba’s film refers to Manchester as being the first industrial metropolis (debatable) and Margate as being emblematic of the seaside holiday industry that sprung up as a result. I see Barba’s deconstructed use of celluloid and light as being vacuous. Intrigue with antiquated machinery allows for curious play, for a while, but ultimately reveals nothing. A nostalgic reflection on our transition through the industrial age maybe, but nothing more.