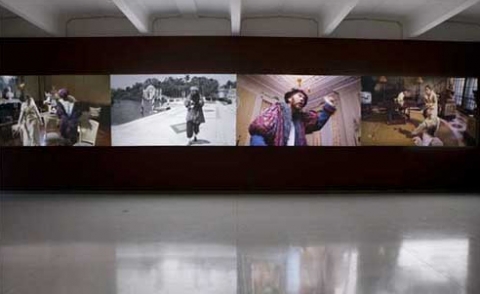 E-mail spam scams from African dignitaries, bank managers and accountants fill our in-boxes with deals to share in vast wealth and assets from deceased individuals (who have died under tragic and dramatically had-it-coming circumstances, like plane crashes, road accidents, brutal, unsolved murders) who have deposited enormous sums of money in pretend banks and whose next of kin cannot and never will be traced. Unthinkable wealth is discovered by the author of the email; a chance if you respond, including revealing your most personal and financial details, to acquire a specific percentage of this colossal bank balance that has been frozen until a ‘genuine’ claimant can appear and ‘inherit’ the spoils. These emails come from/possess conflicting senses of esteemed authority and desperate supplication, they embody dreamlike opportunity, exciting, potentially criminal venture and a kind of escapist arbitrary involvement; they invoke a wonderfully affecting combination of pitiful emotional despondency and enthusiastic down-and-dirty greed. In all they express the foundation for all drama, they construct the materials for all theatrical or cinematic narratives. Equally they epitomize a relentless desire to accumulate, they are the perfect illustration of capitalist tendencies while also underscoring disquiet between notions of the New World representing advancement and intellectual supremacy and the Third World embodying deficiency, ignorance and the unrefined. These scams are not a recent phenomenon – they can be traced back to letters from the 1920s, then called the “Spanish Prisoner” swindle.

Catherine Sullivan’s video installation Triangle of Need uses one such e-mail scam as the basis for her work which commingles interrogations on the construction of narrative, performance and genre conventions with the complex nature of capitalism, wealth, commodity and poverty and annotations on western cultural dominance and its assumed superiority. She employs the e-mail’s author and central victim as protagonists in a broad and complex series of film works that simultaneously connects them to a bizarre experiment to reintroduce Neanderthal man into modern society, including their long-extinct language, the story of industrialist James Deering and reconstructions from the Pathescope Film catalogue which he screened at his sprawling Miami estate, Vizcaya and the disfiguring and elegant movements of a spinning athletic ice skater. This breathless list of references, collisions and interchanges between reality and fiction make up for a remarkable, hypnotic and distressingly voyeuristic series of interlocking screen installations made up of projections and monitors surrounded by lush red theatre drapes.

The cast of these films is made up of an array of characters from different historical periods from the hominid species of hairy ape/men and women to elegant 1930s aristocrats, a man dressed like Julius Caesar, a sleeping beauty taken into stupor by some unexplained hex, a fairy princess, dressed in white, gazing into a crystal ball and a series of men and women in different contemporary costumes who sing, chant, speak and mumble a series of interchanges using a specially-constructed artificial language made up of non-words, throaty clicks and business parlance, like “60% transactions”, “monetary values”, “cash deposits” . The remainder of the script in the works, principally delivered via subtitles, is made up of a cut-up of extracts from poems by Edgar Allan Poe, Stephen Foster, H.S. Cornwell among others. There is no simplicity here. And to add further tiers of reference and elucidation/confusion Sullivan collaborates with the composer Sean Griffin, who delivers a remarkable soundtrack sourced from materials on bird-song, extracts from the “The Changing Light at Sandover” by James Merril, the sacred music of Joachim Neander and information sourced from supernatural communications in the form of notated séances as well using his musical education to construction the work’s artificial language. In addition Sullivan has collaborated with the choreographer Dylan Skybrook to frame the actions of her characters using a physical vocabulary of disfiguring, grotesque movement. Finally she has worked on the aesthetics and narrative mutations of the films with Nigerian film director Kunle Afolayan, whose presence in the film’s organization and architecture imbues the project with citations from cinema from Africa. Afolayan’s presence reinforces the central theme/interest in notions of wealth and poverty and specifically an interest in siphoning money from individuals often employing criminal methods, embodied by the e-mail scam or a broader investigation of capitalism and its exploitations. It also recognizes an underlying view of what we believe to be the primitive and the progressive.

Sullivan is an artist whose interest lies in simultaneousness and synchronization. Her work is often multi-channel where three, four or five screens play out their actions in unison. She also uses multi-layering, where numerous actions are presented on one screen at the same time. Here camerawork is fluid, graceful; scenes are often shot from multiple angles and presented on different screens, while her screens shift from black and white to colour imperceptibly, and action is seen out of sequence, present, future and past are presented in deliberate unity. The total effect meanwhile is discordantly dense. The audience requires time to adjust to its complexity, finding sources, narrative entrances where they can penetrate its conflicting intricacies. The work loops further foiling the audiences expectations of a beginning and end. This cast and the audience are forever propelled into this cycle of “Need”.

This perpetual unrequited ‘desire’ is highlighted in Sullivan’s characters’ behaviours suggesting an abandonment to insanity; they repeat out phrases, actions, emotions, movements in progressive cycles of distress, liberation, anger, humour, pain, resilience, pride, hardship, joy and suspicion. Characters flip roles and identities, at one point victim, at another villain. This sets up a framework of artificiality or fraudulence emphasized by either the opulence (James Deering’s grand estate that itself commingles numerous overtly sumptuous styles and genres) or the destitution (dilapidated anonymous American apartment, abandoned and unadorned) of the film’s locations. This is further explored in the recreations of films from the Pathescope Film catalogue, categorized in screenings separated by themes like: ‘Comic Scenes’, ‘Military Sports’, ‘Manners and Customs’, ‘Fairy and Trick Scenes’, “Vaudeville’, ‘Popular Science’, and ‘Reconstructed Histories’. This is fake on fake, fraud on fraud, simulation on simulation.

Nowhere outside of the imagination of Matthew Barney does such a collision of symbolism, beauty and artificiality exist, but Sullivan’s motivations are not to bewilder with the obtuseness of Barney’s grandiose athletic soap operas. Rather she has in mind a saturation point of intense research and reference giving conclusions to the operation of understanding cinema, of inhabiting fictions and existing within a complication of past and present, real and imagined, the performed and the existent, while scrutinizing genuine political and scientific realities, values and systems that have placed us into frameworks that celebrate advancement through wealth and greed, create massively distorted and discordant perceptions of self, worth and status.

This explains the ‘disfigurements’ of the characters, their roles, speech and movements and the presence of the figure skater who on the last screen is seen spinning into a sculptural bodily blur while projected, disintegrating out-of-date 16mm film stock of beauty and model shots scorch the screen with a combination of the alluring and repellent.

Triangle of Need is genuinely bizarre, but uses this accelerated weirdness to thrust us back into our reality setting up a sincere discourse on understanding the world with its brutal opportunism, its fragmented alliances, its artificiality and distortions, its ferocious contingencies.