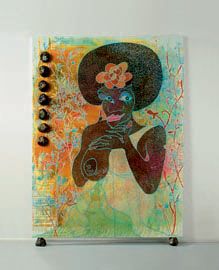 In an astonishing retrospective at Tate Britain, celebrated British artist Chris Ofili (who received the 1998 Turner Prize) exhibits memories of his trademarked highly original paintings, watercolours and latest pieces to triumphantly invigorate the medium of painting.

Ofili’s work has always witnessed a great deal of critical appreciation, viewer delight… and subject controversy. Among the 45 paintings that established Ofili as a new force to be reckoned with within his chosen medium, combining the beautiful with the disgusting, graciously decorating his large canvases with balls of elephant dung to contribute a sculptural aspect to his paintings as well as to alter our Western eyes to notions of beauty, either the dung by itself or accompanying his eccentric characters and figures depicted in his paintings.

The artist’s work took a major turning point after his visit to Zimbabwe, witnessing dotted cave paintings that Ofili has now come to be associated with as he elegantly turns his William Blake watercolour influences into soulful, sublime-altering personas that reflect his attempts to reimagine Western audience’s ideas of black or ‘other’ stereotypes. Opening the exhibition is Ofili’s Shithead sculpture from 1993 which used his now synonymous material to present his artistic profile as that of a witch-doctor or more importantly a non-conformist, original British artist. Upon entering a grand hallway of Ofili’s humorous if somewhat offensive hitherto gorgeous pieces are the controversial The Holy Virgin Mary depicting a black Madonna in an iconic majesty of collage, dung, glitter, paint and more to immediately gain attention from audiences who thought they knew art history up until the work’s presentation. This room also includes some of Ofili’s more Pop-appealing paintings such as The Adoration of Captain Shit and the Legend of the Black Stars (1998) which in later versions has paid homage to Warhol’s Elvis manipulations and No Woman No Cry, a tribute to the Bob Marley song-of-the-same-name and Stephen Lawrence; the teenager murdered in London in 1993. Other pieces demand closer inspection so as to reveal the collaged images of famous rappers and African beauties, assembled as cherubs against the abstracted backgrounds of Ofili’s works.

The famous Upper Room (2002) co-ordinated by Ofili and architect David Adjaye (who would collaborate again for the 50th Venice Biennale) presents Ofili’s religious influence and reliance into a complete installation of 13 paintings which reimagine a Warhol monkey picture with The Last Supper and Ofili’s exploration of painting and mythology to truly and spiritually enhance viewers to Ofili’s practice. Upon entering and leaving this wonderfully meditative room, viewers are left spiritually fulfilled and artistically enhanced. It is when coming-upon the Red, Black and Green paintings that Ofili’s work takes the greater turn for the political to delve into post-colonial topics of Pan-Africanism, black unity, black beauty and paradise (either advertised or imagined). When arriving to Ofili’s own watercolours, the majority are portraits of more fictional characters that have previously inhabited his canvases (notably his Red, Black and Green works) and demonstrate brush strokes not often found in the medium, displaying a fluidity and again spiritual implementation.

However the Blue Rider paintings (painted and exhibited in a unique and humidifying royal blue) tend to shock viewers for different reasons: Ofili had disenfranchised many of his previous trademarks (dung, dots and materials) to produce pieces reflecting his move to Trinidad, not dissimilar from that of Gauguin. Exotic and magnificently coloured, they occupy their spaces with monumental simplicity, as do the pieces in the last room that exhibit Ofili’s very latest compositions. They characterise the artist’s ability to not rely on a multitude of materials to not in fact reduce the effects and themes of his earlier work but rather augment his palette and fascination into the mystic other.