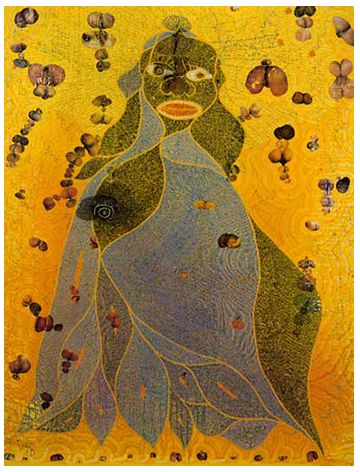 How very wrong, deluded or naïve I was then, or was it that those once vibrant and colourful paintings have now literally faded. I confronted these early works again in the first two rooms of the show, but they felt like a poor simulacra of their former selves, the elephant dung was crumbling, the paint had lost its intensity, if I had forked out the millions to pay for one I’d be very worried indeed. It wasn’t just the condition of the work, it was the imagery, it now felt tired and just a massive cliché of the rich heritage that is African art and black culture.

Ofili had his eureka moment on a trip in 1992 to Zimbabwe, where he realised he could express both his African roots and the white western worlds cultural stereotypes of black people, so came back and decided to:

A. Paint in a pseudo tribal pointillism that must be very tedious, whilst also subverting the language of abstract expressionism removing its mythical symbolism and returning it to the purely decorative.

C. This is the best one, actually put elephant shit on the painting, what’s more African than elephants right! Plus you get the tabloid press giving you silly publicity.

Sorry, about the rant, there were some pieces worth seeing, like the fantastic Space Shit and Third Eye Vision. These dispensed with the clichéd “Black” imagery and delved into a crazy psychedelic geometric world that pushed his painting technique of layering paint and coloured resins to their most intricate conclusions. Abstract shapes, collage and vibrant colour collide to make microcosmic planes of chaos and order. Ofili’s loose, often clumsy painting technique works well among this abstraction, yet the depth and illusion he creates with the resin isn’t nearly as accomplished and fascinating as the more sophisticated resin paintings of Fred Tomaselli.

There were other highlights The Upper Room installation space, a joint venture with architect David Adjaye, which was first installed in 2002, seeks to invoke a chapel-like atmosphere through it’s moody lighting and use of space. The arrangement of twelve canvases flanking a thirteenth larger one suggests Christ and his Apostles, and the arrangement to has an extraordinary sensory effect.

Each painting shows a rhesus macaque monkey, and each is dominated by a different colour, identified in Spanish on the elephant dung supports.

With this work Ofili raises questions about the relationships between civilization and untamed nature, between the religious and the secular, supposedly.

So Ofili got fed up of London and all the media attention of being a YBA, boo hoo, and in 2005 went to live in Trinidad where he could get on with some real painting. This is a move echoed by Tracy Emin and recently, to much derision Damian Hirst, trying to do real painting that is, not moving to Trinidad. Ofili’s recent work unburdened by the shackles of fame and his constricting and tedious trademark techniques are shown in the last two rooms, which are truly awful, pseudo new age bad imitations of Matisse. Before, his bad painting technique was hid behind layers of resin, collage and shit, now it’s laid bare for everyone to see and it’s not a pretty sight.

So with the disappointment of not having my bi-monthly painting fix quelled, I wondered around the non-paying galleries in the Tate and re-discovered some wonderful Whistlers and Sargeant’s. There was also a room dedicated to the St Ives school of Abstract painting, which gave a superb summary of the movement and included stunning works by Bryan Winter, Peter Lanyon, and Roger Hilton.

What’s that you say, I sound like a traditionalist, well maybe, but there are many contemporary painters who as well as having clever ideas of appropriation and re-interpreting the language of painting, can also actually paint. Chris Ofili is definitely not one of them.