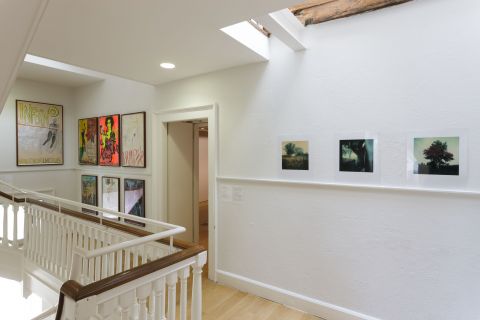 The problem with e-flux is so many of the exhibitions sound unmissable and so many of them are so far away there is no chance of me visiting. Cloud Illusions I Recall was actually unmissable I decided when checking my inbox. I was particularly intrigued by the inclusion of filmmakers (Andrei Tarkovsky, Powell and Pressburger), alongside some of my favorite artists and in seeing how the space and works would be installed. It fitted with my own interests of the curator/creator and the inks between visual art and cinema. Above all I was interested in this exhibition as it was a multi-media exploration of cinema (i.e. not black box), encompassing film, painting, performance, photography and sculpture/installation.

I missed some elements of the show, such as performances orchestrated by the artist-curators Cerith Wyn Evans and Dominqiue Gonzalez-Foerster on the opening night and The Red Shoes, which was screened every Sunday during the course of the exhibition. What I did see was a carefully thought out exhibition, with a vast amount of nuances in the selection of works/artists and their installation/juxtaposition in the galleries.

Relationships between works prevailed everywhere. Pages neatly cut from Samuel Beckett’s short piece of prose, Imagination Dead Imagine (performed as a choral artwork by Wyn Evans) were behind individual panes of glass and were displayed in the foyer space. The sentiments of Beckett’s words ran through much of the show, as did the particularness of the placement outside of the gallery spaces. Peter Doig exquisite hand painted posters for his weekly StudioFilmClub peppered the stairwell. A visit to the toilet in the basement also completed the other line of Wyn Evans’ neon word piece, Time Here Becomes Space, Space Here Becomes Time (itself rather Beckettian), that was seen alongside Gonzalez-Foerster’s installation, R.W.F. (Rainer Weiner Fassbinder) upstairs in the ground floor gallery.

Upstairs 3 photographs by Andrei Tarkovsky were shown on the landing on the other side a doorway from Peter Doig’s posters. Interestingly the placement outside of the gallery of Doig and Tarkovsky’s works threw up an interesting debate the ‘author’s’ intention and their placement within the overall exhibition. Doig is a highly respected artist, but has talked of how he does not see his posters as art and is uneasy about their inclusion in exhibitions as they are made to advertise screenings of films in his studio in Trinidad. In other words these are (arguably) not classed as artworks in the eyes of the artist. Tarkovsky was a highly respected filmmaker who (correctly in my opinion) saw his films as art. The world recognises him as a filmmaker however. For me it was an interesting juxtaposition of the artist who does not see the works in the show as art and the filmmaker who sees his works as art, but are classed as film (or in this case photography). It was intriguing that they were both placed outside of the main gallery spaces, throwing up more questions of authorship, hierarchy and the potential artist see in spaces when they curate shows.

In his book, Sculpting in Time, Tarkovsky wrote, “Artistic creation, after all, is not subject to absolute laws, valid from age to age; since it is related to the more general aim of mastery of the world, it has an infinite number of facets, the vincula that connect man with his vital activity; and even if the path towards knowledge is unending, no step that takes man nearer to a full understanding of the meaning of his existence can be too small to count.”

These words seem to chime with the show and its art; with Beckett; with the lyrics of the Joni Mitchell song that gave the exhibition its title and with many of Wyn Evans works, particularly, ‘Astro-Photography’ by Siegfried Marx. The Morse code that was converted into light emanating from a glass chandelier, also bled into the next room of Victorian era photographs by Lady Clementina Hawarden. Like much of the show I was struck by how the feel of cinema, be it narrative, style or period, was evoked by the selection of works that did not deal directly with cinema. In this case the feel of early cinema alongside the feel of disguise or transformation through costume was evoked through the selection of Hawarden’s photographs. This relationship was heightened by the subtle inclusion of Cindy Sherman’s small framed photograph, Untitled #428 and the sound bleed of James Coleman’s work, Ligne de Foi, next door. I also thought of the difference in the Wyn Evans work to when I had last seen it at Tate Liverpool, a few weeks ago. In Liverpool the chandelier was near magnificent kitsch with a vast use of Murano glass. In Dublin, the piece was stripped of colour and smaller. Somehow the difference was like that between seeing a film on a state of art flat-screen and seeing it in the cinema. I am not sure which version I like best.

More than anything the exhibition seemed to explore the cinematic, as opposed to being concerned with cinema. There is a subtle, but important difference here. Put simply filmic and cinematic can evoke film and cinema, without being directly involved with it. Much of the work in Cloud Illusion I Recall evoked a relationship to cinema. Rebecca O’Dwyer puts it succinctly near the start of her catalogue essay saying, “The cinematic denotes a kind of being outside, of looking in, as a voyeur. It refers to some degree of separation in the relationship between perceived reality and ourselves; we attest to a reality of which we are not a part, and yet simultaneously observe this split.”

Sometimes I wish I was cinema, to be inside film. Usually I sit outside, like the voyeur, looking in and being aware of the distance. The works in the show, and its curation, often felt like being on the crest towards the suspension of disbelief that is so often talked about in regard to cinema; awareness and the observation of the split that O’Dwyer talks of, kept us (and the artists who created the works) on the outside, or at least at a sideways glance from cinema.

Marcel Broodthaers has a simple and quietly powerful piece in the show. 24 frames of film were shown in a frame,; from top to bottom each frame showed the formation of the artist initial, M.B., which also served as the works title. One can imagine the translation to film and how one would see over the space of one second the creation and destruction, sisyphean-like, of the initials. Broodthaers famously said that; “I am not a filmmaker. For me, film is the extension of language.” In M.B. language and film are brought to the intrinsic basics of an authored piece, the initials of the artist/director only. In a twist, that cinema so often delivers; I could not help that notice that Broodthaers’ initial is also on the mounting of the edition work. This initial bears no relationship, other than the two letters, to those on the celluloid. Godard’s words, “Photography is truth. Cinema is truth twenty-four times per second”, here is no more than a façade, a façade that is true of many/all of the artists in the show, but none more subtle than in Broodthaers’ 24 frames of film.