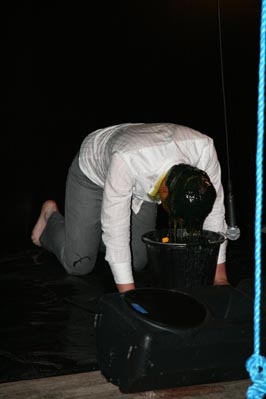 In its symbolic import the spectacle of Guantanamo, however shrouded in mystery, corresponds to the spectacle of public execution in the middle ages. Its aim is not so much to re-establish a balance as to bring into play, at its extreme point, the dissymmetry between the subject who has dared to violate the law and the all-powerful sovereign who displays his strength.

An isolated cell. Darkness, grey buckets and frayed ropes depict a curious apparatus ready for operation. A perpetrator waits next to an American newspaper opened at the business section to display graphics of global economies. Happy faces smile back from the broadsheet despite dangers of impending economic catastrophe. There is an impossible and excessive silence in this room. A prepared malevolence awaits its cue to initiate choreographies of punishment.

A flick of a switch. Acute feedback as a microphone dangles above a pair of black speakers:

Course 1: information given in response to a product, a person’s performance of a task, etc. Used as a basis for improvement.

Course 2: the modification or control of a system by its results or effects.

Course 3: the return of a fraction of the output of an amplifier, microphone, or other device to the input, causing distortion or a whistling sound.

These combined oscillations generate a high pitched squeal that resonates and pulses with each pendular swing initiated by Clarke’s hand. Auditory senses are overwhelmed while sight struggles to recognize and interpret shadowy forms. Ears burn. Eyes seek as a chimeric transformation takes place. Clarke shifts between the role of impassive and distanced tormentor to a casualty of torture. His body becomes a site of self perpetuated violence as repetitive cycles of distress are enacted and re-enacted to a point of tired despair.

The head is plunged into a bucket of oil. Clarke’s features are indistinguishable. The action is repeated. Objects are placed in the mouth to gag and suppress screams. Strobes reveal the face dissolving into a greasy mask melting and dripping. Buckets suspended by ropes are kicked – their proximities clash into each other, altering the course of the microphone. Clarke pulls himself up onto the ropes – the torso stretched – tendons stiff, to re-represent a gruesome ‘Lady Justice’ whose scales symbolizing matters at hand are held in balance by mildewed bones and oil.

Clarke’s actions inscribe an institutional violence. Torture is nothing new but since 9/11 an ironic, dualistic impunity has been declared. The U.S maintains its sovereignty through extreme practices exceeding its principles – a moral superiority which sanctions an exception to international rules and norms in the pursuit of ‘truths’. Did we ever doubt that the horrors of 9/11 would not be met with an American reign of fire in distant lands? Repression and refutation have become condoned, acceptable instruments in the defence of Western liberty.

The air is heavy and suffocating. The newspaper is left unturned. Shadows distort and Clarke’s deformed features flicker in short snaps of electric light as he leaves the room. While we are all products of the structures we are born into and live within, some accept sovereign power with joy while others question and challenge it. Spectators struggle to stifle the screams. Their attempts may be futile.