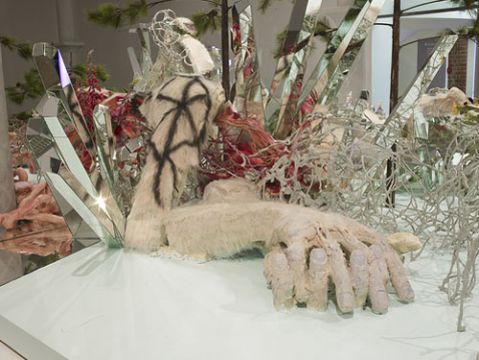 Can it be possible for something seemingly delicate, still, and tranquil to actually be writhing with death, decay and despondency? After a recent visit to two sleeping giants I discovered the answer. Residing in a magical, white room on the ground floor of Tate Liverpool I stumbled upon an enticing world full of overwhelming contrast. David Altmejd’s ‘The Holes’ intertwines various juxtaposing themes; life versus death, rejuvenation versus stagnation, and peace versus destruction are just a few ideas that are sewn into a mythical mixed-media sculpture. Upon entering the room, you are met with a serene vision of fragility and ethereality. Laying on a large stage are angled fragments of glass and mirror alongside delicate trees and natural entities. Blue bird eggs create an air of fertility in the work – their placement next to the trees creates a refreshing feeling of growth and rejuvenation. But STOP. Take a closer look. The discovery of bodily entrails hanging over and around such beautiful objects suddenly changes the mood of the work. What was initially a serene and beautiful sculpture is becoming a confusing and unsettling display of thanatology.

The sculptural piece lends itself well to being studied to its fullest as intrigued viewers can walk around the entire perimeter of the work. This method of exhibiting allows the viewer to engage with the piece as they can wander around a whole world contained in one relatively small room. If only studied from one side, one would miss the warming embrace of two giant hands hidden on the opposite side of the sculpture. These hands belong to the giants, whose dismembered body parts can be found concealed amongst the beautiful objects in the art work. Each piece of the sculpture itself contrasts with the theme that it’s trying to convey, creating an exquisitely complicated blend of confusion and surreal fantasy – examine how the grotesque digestive organs lay like lace threaded carefully over the sculpture and you begin to appreciate the complexity of the artwork. How can entrails form beautiful, delicate pathways? Likewise, how can a severed body – or indeed a severed giant – lay looking so peaceful and comfortable? Altmejd has certainly achieved these contrasts through his clever use of immense scale, imperturbable colours and an intelligent composition which makes the content portray an atmosphere that opposes to the one generally expected to be coupled with the theme. In this entrancing room, death is married to hope, decay is coupled with life, and haunting silence is confused with peaceful tranquillity.

The absorbing scale of this work, for me, is most certainly one of its strengths. The unrealistic size of the quiescent faces and ostensibly abeyant hands contributes to the artworks mystical feeling. Whilst we may usually think of a giant as threatening, Altmejd’s unimposing creatures feel still and pure. Indeed, their size is overpowering, making you feel as if you have entered their world, which much be treat with respect as you tiptoe around the beautiful creatures ‘sleeping’ in front of you. The calming colours make it difficult to overcome the fact that the compelling creature is actually not asleep. The peaceful giants look as if they are lost in a tranquil daydream, and forcing yourself to realise that they are actually dead and decaying becomes an arduous task. The giants lay on a bed of white – a colour which we tend to associate with purity and innocence. No harsh colours, such as blood-red, overpower the piece. Spot-lit from above, light reflects off fragile fragments of glistening mirror, making soft patterns slowly dance around the walls and various body parts in the sculpture. If viewed literally, only looking at the themes being portrayed, it could be argued that the sculpture is severely depressing and grotesque. However, the clement colours and calm lighting transform the work into a tranquil portal through which lies a mystical world of serenity and composure. Moreover, the vast array of textures, such as soft fur and glistening glass work with the lighting to create a sedative atmosphere. Meanwhile, the composition of the piece helps to hide the theme of decay and prevent it from becoming overly apparent. The lungs, for example, do not sit near the chest of the creature. Instead, Altmejd has laid them near the edge of his piece of work. No blood leads you to the lungs, so they lie, subtly, waiting to be found.

But why has Altmejd wanted to make his work so intensely contrasting, with the horrifically negative themes and objects being hidden in such an unimposing manner? Surely if he wanted to explore themes of death or eradication he could have created a gothic piece of work encapsulating only those themes, so that solely feelings of distress, dejection and despondency would have been immediately forced upon the awaiting viewer? Perhaps an instantaneous reaction of disgust and shock is not what Altmejd wished for? Perhaps it is in fact the theme of purity and rejuvenation that he wanted us to focus more intently on? Or, perhaps, he simply wants each viewer to have a different experience when viewing the work? In an interview with critic Catherine Hong, Altmejd declared that ‘things look more alive when they are growing on top of what is dead[1]’. This leads me to wonder if Altmejd’s predominant intentions were to use contrast to help us to view things in more depth. Indeed, after analysing the idea, using contrast can be a very powerful method of emphasising a thematic. When an egg – a symbol of new life – is sat next to unconnected lungs, we are hit with the idea of the miracle of life, whilst witnessing how close life can be to death. Whatever Altmejd’s intentions, he has definitely answered my initial question, confirming that yes it is indeed possible for death to be teamed with delicacy. I have no doubt in my mind that this inspiring, mystical and thought provoking piece of contrasting artwork is a superb display of how contrast can be used to enhance a viewers experience of a piece of work by provoking thoughts and questions. ‘The Holes’ has left me asking, would you appreciate life more, if confronted with death?