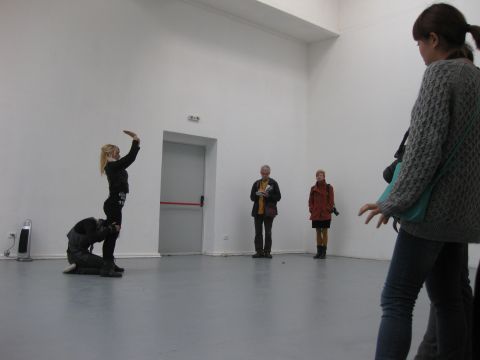 Since its opening in June I have been asking friends freshly returned from La Biennale di Venezia how they had found it. Generally this precipitated dreamy looks into the middle distance, a breathy “ah Venice” followed by a long list of ‘countries’ I must visit. I have recently joined their sighing ranks and am adding my personal recommendations for those lucky enough to catch the final week of this unique international art exhibition.

I had an agenda as I travelled around the two main sites of the exhibition (the Giardini and Arsenale) and some of the collateral events around the city. This is no bad thing if you are time poor. Much like Christmas shopping in a huge city centre, it can be good to have an idea of what you might want before setting off, allowing you to concentrate on fewer things in a more focussed way. I am currently researching non-verbal communication in my own work so at the 55th Biennale I set myself the task of observing how audiences ‘communicate’ with art works. Paolo Barratta, President of La Biennale di Venezia, believes that viewers of art at the Biennale are ultimately seeking the “emotion of dialoguing with the work” and I was interested to observe the nature of this dialogue. How would this art from a plethora of countries, forged by artists with a multitude of languages and cultures, ‘speak’ to us the audience?

The exhibition across the two sites is called The Encyclopedic Palace, and the curator Massimiliano Gioni, calls it “an adventure for the eyes”. As I walked for what seemed like miles through the cabinet of curiosities-like show – drawing pencils in fist and aqua alta wellies on feet – I certainly felt this excitement. Nevertheless I was struck by the relatively short amount of time people were actually directly ‘conversing’ with the art. Generally audiences spent more time looking at labels or looking through the mediating screen of a mobile phone. I’m probably no different in my approach – searching for contexts, trying to remember what I’ve seen – but some of my favourite experiences from La Biennale were those that resisted, to a certain extent, this impulse to translate and capture. Perhaps this is because the works of Tino Sehgal in the Giardini and Alexandra Pirici and Manuel Pelmuş in the Romanian Pavilion are literally embodied conversations – humans as art objects.

On first walking into the Central Pavilion at the Giardini I become aware of indistinct murmurings resonating through the building, on entering the second room I realised that they were coming from two women kneeling on the gallery floor. Eyes closed they seemed to be communicating with each other; one with her voice, treading a line somewhere between speech and song, the other tracing the lilt of the other’s utterances through subtle dance movements on or near the floor.

This was the first time I had seen one of Anglo-German artist Tino Sehgal’s “constructed situations” and I didn’t reach for my camera or search for a label at all. I was transfixed by what was in front of me – I just watched. I was not alone in this with several other people watching from afar, some sitting down on the floor with the performers and others sitting on benches a short distance away. It felt we were all tuning in to this other world to some extent. Although the interpreters’ focus was on each other, the experience felt welcoming, as if we were invited to join in the conversation. I observed several spectators mimic the red-haired dancer through small unconscious movements of their hands and faces, I saw others silently mouthing to the dark-haired woman as she chanted, her unknown words forming in their mouths.

So what was it that made me forget my desire to contextualise and document (apart from the invigilators asking us not to take photographs that is)? I think Sehgal, through his intensive rehearsal period with his performers, has hit upon something that feels at once familiar and strange. The world they occupy feels both ancient and contemporary. Is the dark-haired woman imparting wisdom? Are these magic words in a language I don’t understand? Are they sharing stories? Is this a ritual we are observing? It felt important, worth hearing, at times it would feel almost religious. But then I would catch just the slightest hint of a pop song or realise that this was closer to beatbox than spiritual chant. The dialogue was always shifting away from what I could grasp – and did she just say “global worth” when I thought there were no recognisable words in this piece?

In turn the quieter dancing woman with the red hair seemed to be echoing things I could imagine myself doing day to day. She almost looked like she was doing up a button, she almost looked like she was drying herself after a bath, she was almost doing something that we the audience would do – but not quite. We were left questioning, adding our own experiences and memories into the delicate conversation happening between the two of them.

If you can I would recommend seeing this piece at different times of the day as the nature of the call and response changes with different interpreters. Sometimes there are two, sometimes three on the floor. Sometimes the interaction is intergenerational, sometimes it is all men. Each individual has sounds and movements that are particular to them with their age and gender effecting how they move and sound. The dialogue is different each time but Sehgal seems to be suggesting that we can all dialogue nonetheless; he has created a shifting sand type of universality.

Another work well worth a couple of visits is Alexandra Pirici and Manuel Pelmuş’ An Immaterial Retrospective of the Venice Biennale in the Romanian Pavilion at the Giardini. Again perhaps it is because the art objects are human beings that dialogue feels so possible. This work takes on the entire history of the Venice Biennale with a small collection of Romanian performers physically re-enacting artworks that have been shown there since 1895. They perform the same non-chronological, non-hierarchical retrospective every day during opening hours. They start each action by speaking aloud (in English) the title and a brief description of the work in non-emotive terms, and then they enact the artwork with their bodies. There is a certain deadpan delivery but some of the ingenious ways they depict videos, installations, sculptures and happenings can be hilarious. When I visited spectators seemed to be split into two camps; those hanging out on the edges of the room near the door, amused, intrigued but with one eye on an exit route, the others trying to directly ‘converse’ with the artwork (and in some ways with the history of the exhibition) by standing near the performers, mimicking their movements, daring them to break out of character.

These were just two works where I felt particularly engaged and questioned, so for those yet to start up their own conversations at the Biennale, here’s my penny’s worth! Anri Sala in the French Pavilion for beauty and conceptual neatness, Sarah Sze in the USA Pavilion for her sense of wonder, outside of the main two sites Bedwyr Williams: The Starry Messenger at Ludoteca for his humour and poetry and Richard Mosse at the Irish pavilion for his invitation into an uncomfortable immersive world.

And if at the end of a long day of ‘conversing’ with art objects, installations and films you feel too tired to talk any more I strongly recommend you finish with Miloš Tomić’s musical diaries at the Serbian Pavilion for a reminder that creating and communicating joy can be a valid reason to make art.

An artist interested in making work with and about people and the ways they communicate.