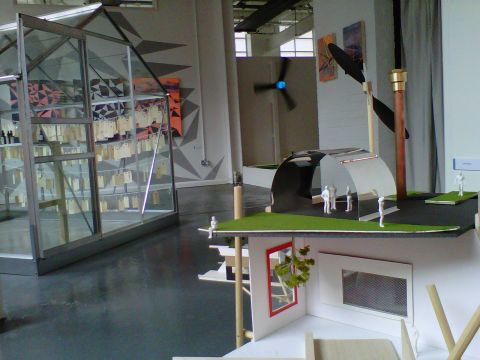 The Creative Spark exhibition boasts everything you would expect from an undergraduate degree show; variety, exploration and keenness to succeed. Split over two sites, S1 Artspace and Arundel Gate Court, it displays a mixture of work from two undergraduate courses; Creative Art Practice and Fine Art.

On the ground floor of Arundel Gate Court there is an abundance of work; one of the first pieces I was drawn to was Lewis Parry’s imagined utopias. These structures invite the viewer to become a part of Parry’s creative thought process. The carefully hand crafted element to the sculptures echo architectural qualities; raised off the ground they portray an alternative living universe. Christopher Higson’s video piece also resided in my mind, the film consisted of scenes that could have been out-takes from a classic horror film. However, despite the disturbing undertone of the imagery, I found beauty in the subtleties of the film, which are highlighted in the accompanying photographs.

In opposition, David Mitchell’s sculpture/projection was a calming experience. The viewer is enticed by the hypnotic smoke that slowly makes its way up this minimal structure. The contrasting elements of the dense structure and the movement of the smoke allow an interesting balance in the work. Another work that intrigued me was Isobel Jones’ bowls. Reading through the catalogue that accompanied this exhibition, the context behind this work seemed topical and significant. However, when confronted with the physical artwork I cannot help but feel that more could have been done to justify the contextual background; there were far too many Ikea bowls.

Manoeuvring my way through this maze of artworks, I entered an intriguing doorway filled with black balloons. As I turned to face a stairway, I was encountered by an installation created by Melissa Tutin. A cluster of balloons lay at the foot of the stairs; slowly dispersing as the stairs ascended they created a mass of these symbolic black objects above ones head. Looking more closely at the balloons revealed that they had small tags attached stating name, age. This installation was probably one of the highlights of the show for me; Tutin’s use of the space was well thought out and the concept was well executed. She questions life and death, religion and culture, heaven and hell, through the careful placement and mass of these dark objects.

Moving to the upper floors, Aiden Taylor’s beautifully configured sculpture monopolised the focus for all the right reasons. Fantastically executed, this installation allowed the viewer to walk through this spatial drawing. The tension in each section of string provided a precision to this piece; I can see the artist building on this idea and moving on to create even more ambitious artworks. Charlotte Kiernan’s work was actually broken when I visited the space, despite this it was still very interesting. Kiernan’s work focussed on the disorientation of the relationship between the eye and the brain. Three abstract shapes reside in a darkened out space, the light (which was not working) was to shine on these structures creating a shadow; there were also black shapes painted in the space to (I presume) echo the effect of a shadow. This created a contradictory environment, making the viewer question their perception of the artwork.

In the second venue, Jennifer Moffitt’s canvas portraits initially draw your attention. Spanning from floor to ceiling these portraits depict facial features in ink, the expressionless faces blend into one from afar and illustrate both similarities and differences in human features. Jessica Holden’s use of surface, texture, composition, and colour, really stood out in this venue. Her large scale painting echoed influences of Mark Rothko with a contemporary twist in her combination of surface textures. Other interesting works include Joe Draper’s film, which blurs the boundaries of public, private and professional roles, and Rowan Roberts’ contrast in the materiality of his sculpture.

Overall, the BA Contemporary Fine Art and Creative Art Practice work wasn’t easy to distinguish, and the combined degree exhibition showed a handful of promising talent. Some minor details let the exhibition down for me. I felt like the works were slightly limited on space, the labels were shoddy and there were no statements to accompany names. I had high hopes for the catalogue having seen the accompanying Creative Spark branding in leaflets and posters. I had hoped to see this quality mirrored in the catalogue. I was, however, disappointed, as the catalogue was very poorly put together, it lacked a design focus in the layout and formatting, and the content was also very muddled. Despite these details the most important aspect of any exhibition – the art – certainly made for an interesting trip into Sheffield.

Elizabeth Hardwick is a writer and curator based in Leeds, graduating with an MA in Art Gallery and Museum Studies from the University of Leeds in 2010. http://elizabethhardwick.wordpress.com/ 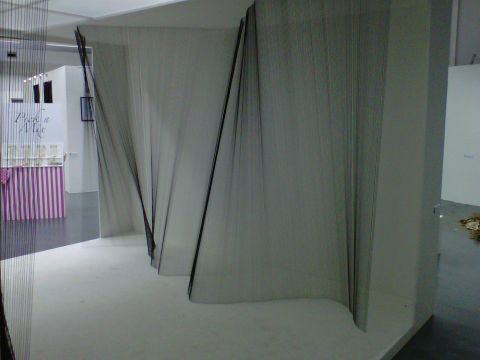 COPY is a platform for writing and publishing in the field of visual art and performence, co-initiated by Joanna Loveday and Charlotte A Morgan.