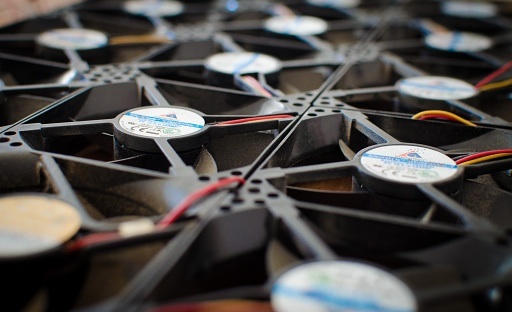 Currents has been commissioned by Edinburgh Art Festival, and is the work of Artist and musician Yann Seznec. Produced by Suzy Glass using computer fans donated by Computers for Charities the piece re-appropriates previously discarded technology into an essentially recycled installation located on Easter Road in Edinburgh in a re-painted and re-purposed police box.

Tied in with the Tardis similarities is the work’s ability to transport the participant into another place. The weather conditions from numerous places are captured in real time and the data is harnessed to recreate wind conditions within the confines of the police box using computer fans. You quite literally could be blown away by this piece.

Seznec manipulates technology in ways other artists might manipulate paint, technology is part of our current present existence, so it’s a huge part of contemporary art. Phase, fad, ism, Post/present/past/future po-mo, who knows, the important aspect of technology in art right now is its ability to expand an artist’s visual vocabulary.It’s interesting how you are reading this piece right now – you are probably on some device consisting of plastic and metal, our connection with technology is becoming increasingly seamless.

Artists of the 60s working in the realms of Pop such as, well – I probably don’t need to mention examples such as Mr Warhol here, so I won’t dither. We’ve all seen his work, weather on kitsch little mass produced tea-towels or on t shirts with extra digits in the price tag. However, back to the matter at hand; commercialism is infested as much in technology today as it was in the art of the 60s. This Steve Jobs effect in technology has led to a throw-away culture, something which Seznec has mined in order to bring back our connection with our past technology. The use of computer fans could highlight our obsession with tech – they cool down our computers whilst we consume information and data behind screens acting as our gateway to double-click our way to satisfaction (inserts passing Marshall McLuhan reference).

Seznec draws upon real-time data from natural processes that have been transmitted and re-encoded to make a microcosm sitting on the edge of a pavement in Edinburgh. The physicality of the fans wearing away their own plastic existence highlights the tactile nature of technology that likes to boast about itself being two millimetres slimmer and five grams lighter than last year’s model. Never the less, this piece is an ephemeral experience – constantly in flux (just like our consumer desires) you’ll struggle to resist the allure of being a fan *.

*apologies to end on such a pun.