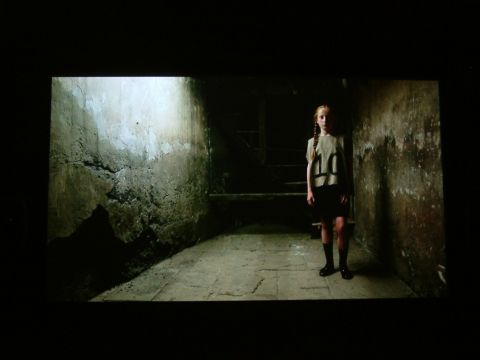 Ascending the narrow spiral stone steps near the entrance to the Anglican Cathedral makes you feel anxious about the awaiting experience. Pushing through the heavy blackout curtains to this enclosed space you are immediately plunged into darkness so severe that you are disorientated and unable to assess the parameters of the room. As your sight becomes accustomed to the darkness you notice that there are four chairs available for the spectators’ comfort to view Bosnian born artist Danica Dakic’s video “Grand Organ”. The video was filmed in St George’s Hall, Liverpool where the Grand Organ is installed. The Neoclassical St George’s Hall has been chosen by Dakic for its fascinating 19th Century history as a dual purpose venue for the contrasting businesses of justice and entertainment, combining a courtroom and concert hall under one roof. It is curious that Dakic has placed the resulting film in a Cathedral setting away from the site of its making. In some ways it could be said that it would be more fitting to place this video in the context of the place where it was performed and filmed. However, in placing “Grand Organ” in a church Dakic could be seen to be adding another, more spiritual or religious, layer to the readings of justice and leisure attached to it by its original setting. The small enclosed viewing space adds to the intimacy of the experience and helps to draw you in to the events unfolding on the screen.

There are three groups of participants in this film; young girls who scurry along echoing corridors and up and down wooden staircases; young choir boys dressed smartly in white shirts who emit melodious, though sometimes jarring, musical notes; and young adolescent girls who act out a courtroom scene in sign language, accusing and sentencing a red haired young woman. There is only one use of the spoken word in the whole film which follows the court judgement: “Not guilty of this crime”. The whole tone of the piece is set by way of sound, vision and choreographed movement.

Dealing in metaphors and trading in symbolism the piece is a hybrid of visual delights and an open narrative which is both magical and ambiguous. It is replete with opposites; light and dark; above and below; male and female; the poor and the privileged; the dreariness and the splendour; the high pitched notes and the low bass tones. All serve to convey a wholly atmospheric and disconcerting piece which creates dramatic tension.

The most apparent theme of the video is the innocence and vulnerability of children hinted at through their carefree activity. This frivolity appears in stark contrast to the seriousness of the courtroom drama. The narrative action is punctuated with moments of stillness and silence which play a dual role in creating atmosphere as well as highlighting the periods of intense activity and energy.

The camera repeatedly focuses in on the Grand Organ calling our attention to the opening and closing of the stops which is accompanied by a noise similar to a throbbing heartbeat; the Grand Organ becomes the heartbeat of the building, the vital organ which supports all life within. The numbers worn by the young girls echo the numbers on the organ stops; a comment perhaps on our individual (in)significance as a part of a collective.

There are several points in the video where we cease to be mere spectators and are implicated in the due process by way of the performer’s gaze. The film ends when the accused stares directly at us before walking slowly downstairs to meet her fate.