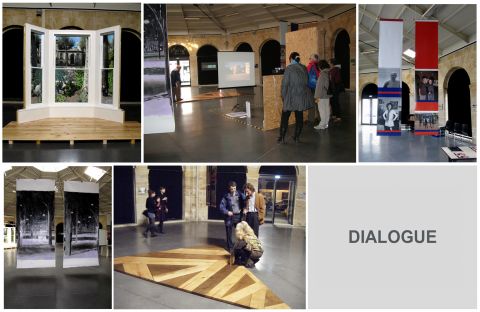 Early November 2010 I travelled to Bordeaux in France. Prior to my trip the news had been filled with stories of French rioters and protesters, the people of France striking against the government in the light of budget cuts, unfair redundancies, the loss of hope in this difficult financial time of their country and its leaders. It was difficult not to take those thoughts with me to see Art Chartrons, an arts festival now in its fourth year and sixth cycle in Bordeaux. This year it opened with a record 27 events over the 14 day festival period. Art Chartrons, now at its height since its inception in 2007 is gaining ever-growing interest in the ever-evolving festival, had certain lessons to teach me.

The tradition of Art Chartrons is to centre around a single exhibition space, for the first part of this two week festival the magnificent Halle des Chartrons was its nucleus. This rotund building sits in the shadow of the beautiful Notre Dame Church and is a stone throw away from Bordeaux’s beautiful quay. Its windowed walls and high ceiling make this point of axis for the festival an intimidating place to start, as here represents the best and central focus of the festival.

This year the Halle’s weighty presence was home, for the first time, to 5 UK artists; Joss Burke, Graham Chorlton, Peter Grego, Dr. Myfanwy Johns and Tom Ranahan. These five artists, all hailing from different experience and mediums, once passing through or now based in Birmingham, had previously spent time in Bordeaux researching the city to make this site responsive exhibition, Dialogue.

Their work filled the tricky exhibition space using its height and curved walls to their advantage. Chorlton and Ranahan hung large paintings and photographic banner work from the ceiling while Burke’s weighty window sculpture bought grounding and perspective to the building. Johns’ pie slice shaped flat floor piece added a subtle and classic twist to the architecture of the Halle while Grego’s installation appeared as a small separate space within the whole. Dialogue at first seemed overwhelming, such scale and gravitas to certain pieces overpowered some of the subtler works, however, as you took a turn around the round room each work linked and looped around one another; each piece was so completely different in style and execution but exactly the same in approach.

Going back to the lessons Bordeaux had to teach me; I learnt particularly how a city could develop from a dark blackened walled town to a stone washed, modern transport system, utopic city. This important history and praise of their Mayor reflected into the work at Dialogue. This utopic rise to a clean modern city while preserving and heralding its past as ideal, Bordeaux’s essence appeared fairytale like; people spoke nothing but praise for the city. The five artists took the various beautiful aspects of the city and re-presented it to the viewer, especially Chorlton’s large scale split paintings showing modern buildings in a green setting or tree lined boulevards at night, Johns’ enlarged fragment of the beautiful flooring found at the Decorative Arts Museum, Burke’s idealised composite window views, all of these things tranquil, still and ideal pulling on the strings of memory and recognition.

However, the juxtaposed edge of struggle, humour and foreign intervention into the city was not lost within the exhibition, Grego’s slideshow of photographs of Le Corbusier exteriors and interiors projected onto a stand from a lo-fi corner built of reclaimed wood nodded toward a sarcastic joke of modernity while Ranahan’s blue and red themed banners with photographs of the English who have come to Bordeaux and set up English pubs within the city as well as portraits if people he met and befriended in Bordeaux, hinted, for me, toward the French Revolution, of protest, of French history and of France today, but with a British invasion twist. Then upon further reflection, Johns’ floor has been ingrained with red; it looks like blood lay upon it. In actuality Johns has simply filled the imperfections in the wood with red, however, you cannot get away from the connotations that tear out of the piece with this red addition. Burke’s window work also seems to take on a new edge, digital composite images, Burke building a utopia of Bordeaux from her original window frame from her UK home. Chorlton’s large paintings then become darker and intimidating, no longer being the key for the continuation of the narrative of the show, rather awkward full stops looming over the viewer.

Dystopia/utopia, tradition versus imperfection, protest banners or proud flags, Dialogue confuses these extremes, on the one hand it’s a sympathetic reflection of the beautiful Bordeaux with each artist touching upon the subtle modern beauty of what the city offers the humble tourist, on the other hand its passively aggressive. There is a black humour to the work that may have appeared hidden if I had not taken with me the images from news reports of the Paris protesters, this darker side of the exhibition I think is mostly unintentional but deepens the group show.

Dialogue is not a grand or brash British invasion taking over Art Chartrons, rather a sympathetic approach and gentle touch to what the city has to offer and sits it closely on a knife edge with an energetic manipulation of a memory of the city, making it the everyday, mundane, dark and humorous.

Dialogue will also be at Oxford Brookes University from 7-18 March, 2011.