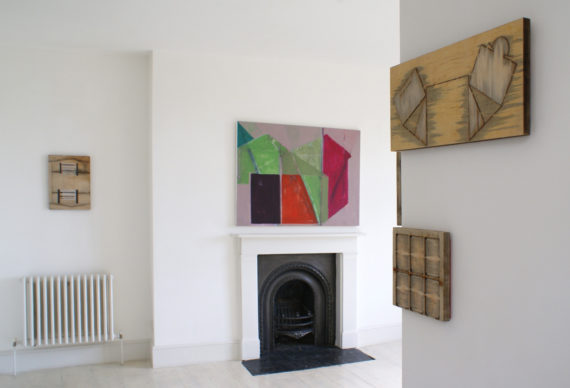 A fundamental agony of the postmodern world arises through the revelation that all is surface and depth illusory. We can no longer be sure of the physical and metaphorical certainties of depth and surface which enabled scales of value from the profound to the superficial, allowed us to speak of underlying truth. In such a context, choices become ideological things. An industrial object is a vehicle for the values of industrial processes and the way we live. And just as we live in our ‘postmodern’ world, we live too with the pricking shrapnel of past certainty under our feet and under our skin. 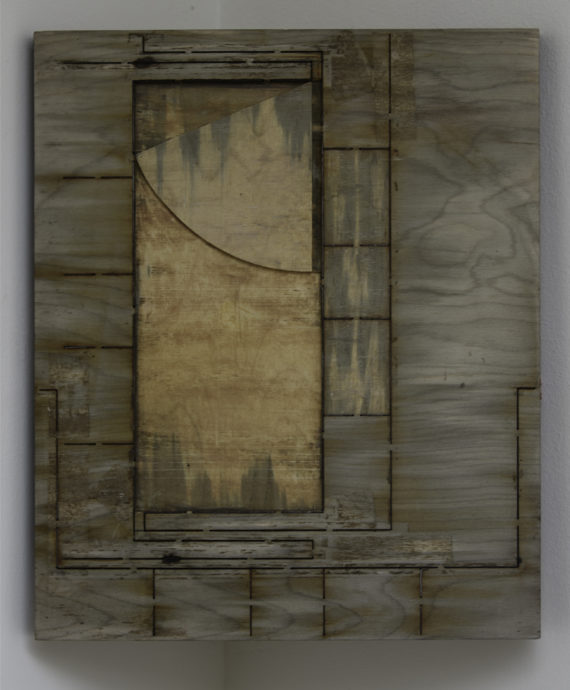 Gill Gregory’s wood – and – metal objects are redundant Die – cutters, used in the mechanical forming of folds in boxes and folders. Freed from functional necessity, their aesthetic status no longer subject to practical considerations, the die cutters are by nature esoteric, hieroglyphic in their initial opaqueness, evocative, mysterious objects that provoke an initial smile of incomprehension.
There are implications for us in their aesthetic freedom. ‘Found’ objects, their shapes scale and materials the vehicles of cultural preoccupations, partake of ideologies in their making and functioning.The finding of an object is an intentional encounter, sought out; objects hint of their implicit potential, finding the finder’s eye in an act of mutual attraction.
On entering the show, a small wooden object, flat surface, on it a rectilinear ground plan puzzles the eye. The lines of the plan appear rusted, or burnt, with a quality consistent with laser guiding. The lines are straight with gaps, spaces through which something, depending upon scale – people – currents – atoms – might pass. The lines reveal themselves as metal, some version of steel, incised into the wood, which is Plywood.Its title ‘Set at Silent’ suggests a cellphone. Within the gouged out phone shape there is suspend a sector of a circle of about 60 degrees at the centre, fixed at its point, a clinging, lyrical passage, one point of its arc holding to the side of the shallow rectangular recess in which it sits.
C-PT 76660 has, or is, a lovely seductive surface, its status uncertain, the surface a camouflage, a hiding or disguising of the architectural, tile like, ecclesiastical connotations, of the pattern of the cutter beneath, and in covering, draws attention to it. The black polish surface insinuates a nostalgia into unsentimental industrial form, like nature on a site of human activity, push and pull of an aesthetic contest. This tendency toward the beauty of surface is further encountered in other pieces through the decadence of soft stains and the process of entropy. Rust rises from the cutters, gathers on the surface, bluish-grey stains spread evidence of invasion, seep into, with, and against, the grain, a growing pathos of material degradation. 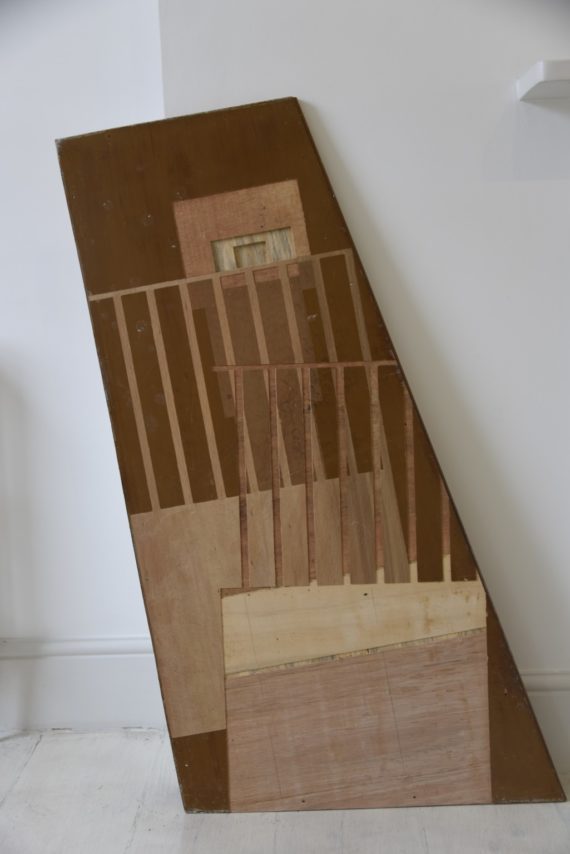 ‘Bar Shelf’ leans in inebriated fashion against a wall, Tatlinesque in its leaningness and the rail – like pattern cut into its surface. 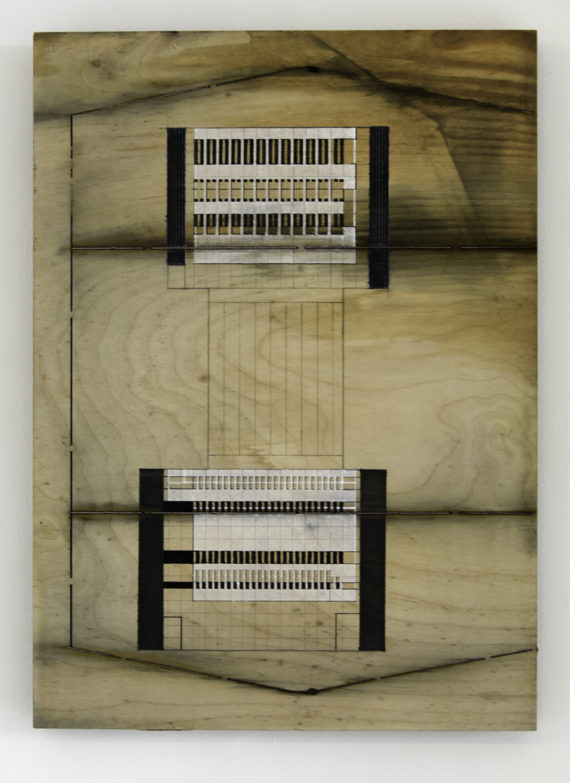 ‘OPENING CHORD’ is made from a Die – cutting Block 32.5cm x 45cm. On it are drawn two similar constructions evocative of black and white piano keys, punched cards, something loom-like, strung between posts. Spatial ambiguity arises through differences in size. The looms partake of another spatial tension between flatness and depth. As they are joined from the bottom of the smaller to the top of the larger by a flat grid, a contrary spatial reading is set up which pulls against an inherent flatness
Didi Edwards’ works are an eclectic mix of markings, brushings, contents. Her work is touched, scratched, spread, layered covered, revealed onto and from the surface, its genesis in her responses to newspaper images, stories colours, shapes. 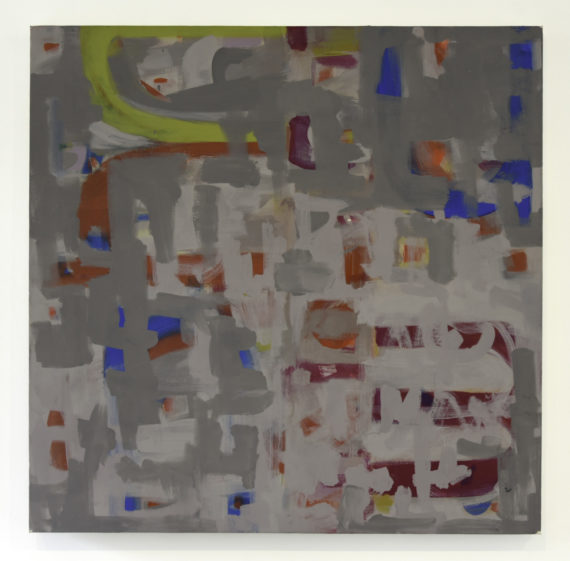 ’Fugitive Text’ a painting of painting on, painting in, and painting out, of greyness muscling in to obscure underlying coloured forms offers a point of reference for her works. Tensions created in the painting of colour and the subsequent obscuring of it provoke a sense of ‘fugitive’ as hiding, escaping, slipping away.The flat dark shapes in ‘Demolition’ are painted from a brute, stark place. Predominantly black and white, the shapes cling together, hang on to the edge of the painting, hinge uncertainly over a white space. 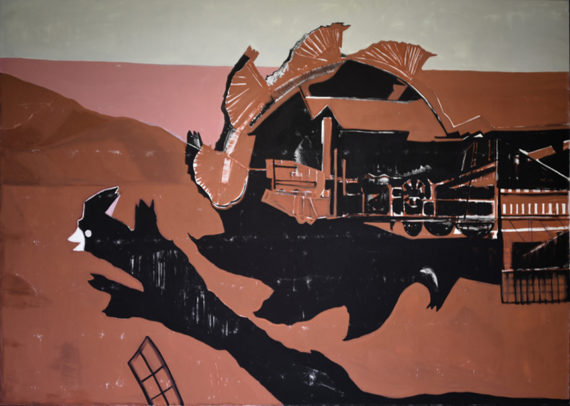 ’Blasting Machine with Monster Shadow’ offers a view of something more spatially articulated. The surreal – cockerel Monster of the title appears shadow-like, its cockscomb echoed in the teeth of the digging machine, lending to it an animal threat of violence in a remote place. Elsewhere, in ‘Sage’, a gentler touch gives rise to a softer, wiser, green surface with yellow sails that wait patiently for the wind. 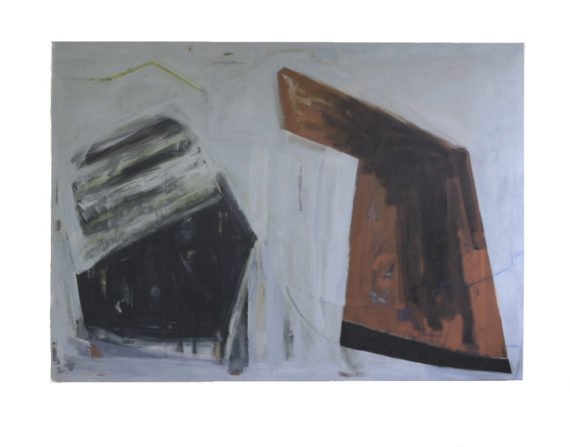 ‘Conversation’ consists of two shapes with some matching angular characteristics and brushmarks (dis)engaging across a blue space. Suggestions of figure-field come and go The painting technique of the blue void doesn’t quite allow it to let go of the canvas surface; curves occur in space; loosely metaphoric, the shapes hang conversationally in the air.
Hints of Clifford Still, the graphic weight of Robert Motherwell the lightness of light and touch in Richard Diebenkorn evoke family connections and values in Didi Edward’s work.Serendipity in the searching underlies her approach.In its anxieties even, Didi’s work is confident, knows where it stands formally, compositionally,
ideologically.
Gill Gregory references another face of abstract expressionism through the grid, gently, in the manner of Agnes Martin. Delicately drawn onto plywood surfaces in the context of an industrial aesthetic, they partake of a Dadaistic simultaneity, of antagonistic aesthetic positions in an echo of contemporary life. The use of a redundant industrial object in Gill’s work expresses an alternative aesthetic of ideological uncertainty. Arising compositionally through a content of rust, stains, spatial ambiguities, and physical intrusions into the layers of plywood, it is juxtaposed with a kind of yearning, a sense of loss in the search below the surface, playfulness in some of the cutting patterns, a hopeful reaching to (re)unite with past certainties.