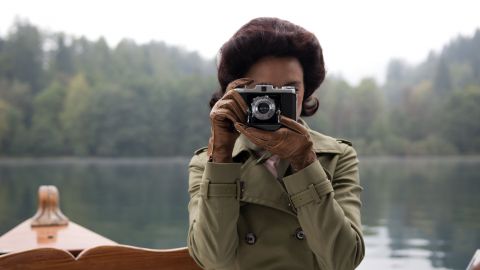 This digital record was found in the memory of a second hand iphone bought in Venice, Italy. What appears to be a conversation between four professionals has been left unedited and posted on interface so that this recent document not be lost as an archival record.

This document is a continuation of:

Paintings from the collection of the National Assembly

7th March 1958 in the People’s Assembly LRS in Lujbljana

Digital record of the review of artistic works and sculptures in the Slovenian Pavilion for the 55th Venice Biennale. After previous inspection of the artwork by artist/lead Jasmina Cibic, by artistic director/curator Tev? Logar, by artist/ journalist Pippa Koszerek and artist/architect Helen Stratford, and interviews conducted by Helen Stratford with artistic director/curator Tev? Logar and the artist/lead Jasmina Cibic, the following notes were assembled and the following resume made in relation to the artwork.

Pippa Koszerek: In Framing the Space, Cibic goes on to interrogate Glanz about his architectural theories. Within the framework of a fictitious period drama (spliced together from interviews found within the Glanz archives), she delegates this role to the character of a charming and sharp witted journalist, Linda, who we first encounter reclining in a rowing boat on lake Bled under the overhang of Villa Bled. Glanz is steering the boat, showing his interviewer this idyllic viewpoint of the building that he redesigned for Tito and the officials of the new republic. As the drama unfurls, we follow Glanz and Linda as they walk, wander and strut through the building, exchanging an intellectually charged, at times charming, at times sparring banter about architecture, art and ideological vision.

Glanz describes his theory for an architecture that breaks with the past, a truly socialist design that reveals its ideology by escaping any unnecessary decorative features. All artworks have to fully belong in the space, he explains as he proceeds to draw a curtain across a painting that has become a feature in the long decorative panel running across the top third of the room. Linda suavely suggests to Glanz that his redesign was not perfect, that there was a compromise. She refers to the sculpted portal of the National Assembly building, thereby returning us to the debate enacted in Fruits Of Our Land. And here, Glanz admits his failure.

Helen Stratford: For me, the idea of Architecture as a powerful force in reinforcing ideologies and positioning people and society is key in the discussion between Glanz and Linda. Here, the tenets of modernism are expounded, ‘Ornament is Crime’ claims Glanz and for him architecture becomes a framework through which the didactic artwork can be read. However Glanz’s struggle, or as you say failure, to implement the modernist style bears witness to an unravelling of the very foundations of modernism – its supposed universality.

Pippa Koszerek: Linda’s interview questions dredge up painful memories. Glanz interprets many of her questions as accusations, seemingly answering past criticisms that have been thrown his way. In Glanz we see the pain of the creator re-examining past works.

Jasmina Cibic: Well, in fact, the beauty of this whole period was that this was an architect who had to invent the language for himself, not only did he have to work for the state but he also had to invent the language. Failure comes up 2 or 3 times ‘Did you succeed?’ Glanz is asked. But for me, it’s more about the question of resolution than success, because the official architecture is never in fact resolved. There’s always a new client. there’s always the next State. For me it was more about doing this paraphrase between the artist or the architect as someone who has to deliver something for the State and of course here we are back to national representation. I mean, did we deliver? Did we succeed? How do you measure it?

Helen Stratford: I see, so it’s more about the impossible goal of obtaining some sort of specific yet at the same time paradoxically generic language. This impossible goal and unravelling of any kind of universality is also laid bare in the final space of the pavilion, the boudoir, reached at the end of the journey through the pavilion. It is instantly recognisable as a model, recreation or maybe re-enactment of Adolf Loos’ boudoir from the Müller House, which Architectural Historian Beatriz Colomina famously deconstructs as both a place of power and a positioned place, subject to the gaze of others.

The Boudoir, like the rest of the Pavilion is clad in wallpaper whose pattern is derived from a national species of beetle that has almost reached extinction due to its name – Anophthalmus hitleri. Here the extensive use of wallpaper becomes a reclaiming of that which is despised in modernist architecture – ornament – and that which is despised in history. Alongside the use of the boudoir these elements work to make visible the symbolic topographies that become overlaid on sites of architecture, spaces and species under specific political ideologies.

Pippa Koszerek: And from the boudoir in the final room, we can look out of a window onto the main gallery space. There I see the traditional paintings that I hastily ignored upon entering the space. In talking to two costumed attendants, who are besuited in the ideological beetle fabric, I learn that the paintings are usually hung in the Slovenian National Assembly building (backdrops to the everyday acts of parliament.) What at first glance appeared innocuous, now hold the weight of office.

And what kind of ideology does Cibic’s work fit into? Within the art world her response is entirely respectable, no, let’s say natural within the discourse of artistic critique. To the extent that the narrative it offers up already implies a number of conclusions about power, agency and morality.

Jasmina Cibic: For the Biennale I was already critically looking at the whole situation, at what the country decides to present to its viewer. Of course, if you come to Venice you have to take on board this whole idea of this biennale presentation which comes from the whole trade fair idea. Venice is the place where national presentation came to idealise soft power, but the system’s own production, it’s not really dealt with.

Pippa Koszerek: And the position of the artist in all this is really interesting, especially if you think about Glanz and his struggle to represent the state. What do you think makes a good state artist?

Jasmina Cibic: Good state artist? This is the double game, the paradoxical status. Nowadays if you are a contemporary artist you cannot be a state artist. A good state artist is not a proactive critical entity and is not a representative that is doing the state good.

Tev? Logar: An interesting comparison is the case of the bug, Anophthalmus Hitleri, which allows us to question the export of national icons. This beetle is a very popular endemic species, but because of its ideological name it has never been exported as it should be. For instance in Former Yugoslavia it appeared on stamps, but never with its name. It is directly referring to the question of what is the appropriate artist to represent the State because politics is always using ‘export icons’.

Helen Stratford: The Venice Biennale is a performance, setting up certain and peculiar frameworks for viewing contemporary art. It’s a fascinating place to visit in terms of these levels of spectacle in a place founded on ideologies of national symbolism, which contrast with the many critiques of representation found in contemporary art. Many pavilions address these tensions played out in the gardens, which for half the year remain empty.

But as the leaves collect on lawns once cordoned off for private views and prosecco, the discussions and selection processes will begin again for those artists to represent the nation. These will undoubtedly take place in public institutions and replay the conversations and contradictions expressed in the Slovenian Pavilion.