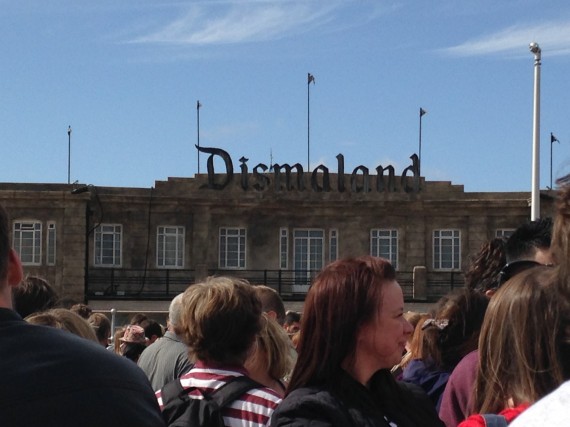 Yesterday I went to Dismaland, the show that Banksy has curated for Weston Super Mare in the UK. By serendipity, that is the day that Corbyn became leader of the Labour party. There’s a glimpse of hope outside the grey walls.

I’ve been asked what I thought about the show itself, but have been struggling to answer that, hence this thinking out loud piece. As a visual arts producer, I always find it tricky to disconnect myself from the mechanics behind any exhibition I visit, especially those that are outside the gallery walls. This was no exception. It was impossible not to be in constant evaluation mode — ticking H&S boxes; checking accessibility etc. I was very impressed by the queue management and even more impressed by the steady flow of visitor footfall — inside always feeling pleasantly busy and vibrant, without becoming congested.

Yes, there were some internal queues — but nothing that I couldn’t cope with (and I’m not a happy queue-er generally).

What I admired more than anything was the consistency of the messaging — it really was fantastic. No effort was spared to ensure that everything was a genuinely dismal experience.

Actually that is a downright lie. There were three inconsistencies in the rigour with which everything was awful:

1. The pizza’s — really lovely, not vastly overpriced, bit slow arriving, but worth the wait. And a decent cup of tea.

2. The stewards were all equally vile and rude, bar one, who was really lovely and helpful. I almost hugged her! But she did step out of role — tut-tut.

3. The art was not dismal — most of it was brilliant — upsetting, harsh and provocative.

The town itself is notoriously dismal, which is very sad but true. But interestingly, when I left I popped for a cup of tea in the café on the pier next door — the view of Dismaland from there was rather beautiful, with people windsurfing on the waves, kids playing on the sand. Maybe it is not the town that is dismal at all, it is just struggling under austerity. I’d really like to see the evaluation of Dismaland — the amount of associated spend, the increase in visitor numbers. Strangely, no one asked me to complete an evaluation.

It was a pretty visceral experience, and very well contextualised within the locale. Surrounded by the beach, alongside the prom, it was wonderful to see the theatre inside the walls and also see the backend outside, the area cordoned off next to the compound. Front stage — backstage all became one place.

In the round (or square).

The audiences are part of the performance.

The staff are too.

The theme of the show is that it is a theme park.

And as such it is the first theme park I have ever been in, and most likely ever will be in. My lack of interest in theme parks was reinforced by the experience — it confirmed my reservations, because I actually do feel that the real world we experience is so much more pleasant than any simile of it made from plastic could ever be. But theme parks are undeniably clever. Because people believe in them.

Those feelings probably bracket me in the ‘old’ demographic — the pint and crisps segment; old labour to New. I prefer cotton to Lycra, leather to plastic. If there had been a megaphone handy it would have been great if someone had stood on the fortress wall and announced that Corbyn had been elected — for the Hawaiian music (interspersed with the screeching of angry gulls) to pause for a moment, to shatter the horror with some hope. But that would crash the magic of Dismaland, where hopelessness rules.

I loved the honesty of the show and the bold statements that exposed the dirt swept under the carpet; revealed the dishonesty we witness within the ‘system’, and the explicit exploitation of the less well off in this country. The governments attitude towards the refugees is not a cheap joke — it’s a painful and horrific reality. And what Banksy brought together reminded us that we are human and should take responsibility for how we treat each other. We are all human, though our government seems to think some people are more human than others.

Which is truly dismal.

Post comment: I forgot to say, I met 2 lovely guys from Manchester, had come down with a mate who had free tickets. Their mate is a collector. These guys said they don’t normally go to cultural things — they usually went to football matches. But it was free and they thought it was good. The beer was alright. Their mate was off buying stuff. Hmmmm. Dirty dismal money?