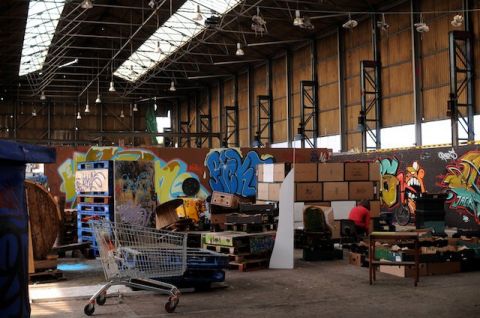 Involving more than 10 artists and a semi-derelict warehouse the size of a cathedral, ‘DIY’, organised by Surface Arts, isn’t short on ambition. It sets out to be a “cross art form exhibition including multiple disciplines on a huge scale … involving interactive processes and participation.”

Much of Exeter’s grassroots visual arts activity is centred on craft fairs and commercial open studios events, so ‘DIY’ is a welcome new departure. It’s one of a growing number of initiatives (my own, Found Space, among them) that are helping to promote ideas-based practice at a local level and open up lines of communication with the wider world.

Artists selected for ‘DIY’ were invited to take part in a collaborative four-week residency and make work in response to the site, using materials sourced from the site. The warehouse is a fascinating space, full of evidence both of its industrial past and of its current use as a sorting depot for second-hand books. It’s easy to be inspired by its decrepit charms, but equally easy to be upstaged.

One of the most challenging issues is filling the vast space and giving it coherence. The sound piece There Are Many Ways to Hit Things and Many Things to Hit by Sarah Farmer and Dave Holder does a decent job, creeping into every corner and imbuing the whole site with a dreamy atmosphere.

Amplified sound is one thing, but making physical objects register in such a distracting environment is another. Some artists have responded by making repetitions or extensions of work that would probably function better on a more condensed scale. Others have retreated to the smaller office spaces to make more conventional gallery-sized work. One of the few works to get to grips with the sheer height of the space is Francis Ives’ Uncultivated, with its tall, pulley-driven dispensers of paper seeds.

However, it’s Julie McCalden’s three little buildings, constructed from old vegetable boxes, which truly engage with the warehouse and its contents. In contrast to the inevitable junk-yard aesthetic of almost everything else in this show, they are beautifully crafted, with ornate ridge tiles and decorative barge boards. There is absolutely no confusing them with warehouse debris.

By placing buildings that work on an identifiably human scale inside a space built on a giant scale, McCalden brings both into focus. Each of her pieces represents one of the qualities that is, according to Nietzsche, betrayed by the desire to create: jealousy, envy or ambition. A provocative bomb to drop in the middle of a group show.

I wouldn’t want to under-estimate the challenge of making work for this space on a tiny budget and ‘DIY’ shouldn’t be wholly judged on the final exhibition. The behind-the-scenes organisation, collaboration and experimentation are, in many ways, just as important.

Surface Arts’ website claims ’DIY’ will put the “the productive space of the working artist as a site of valuable, visual and intellectual interaction … in plain sight”. Although I found the end result bold and thought-provoking, I would have welcomed more insight into what happened during the development of the show, and the links that were made between visiting artists and Exeter’s visual arts community.