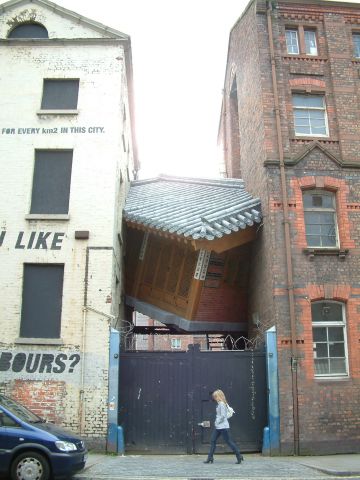 This installation is quite difficult to locate, especially if you begin your journey, as we did, walking the length of Duke street on the same side of the road as the artwork is installed! Retracing our steps back up the street we took careful note of the numbering of the miscellaneous properties and eventually returned to number 84-86. This was when we realised why we had overlooked Do Ho Suh’s work first time round. Walking along Duke Street on the side of the installation, it’s easy to pass by. Above eye level, and belonging to a mixture of newly regenerated and authentically dilapidated buildings, Do Ho Suh’s artwork can be hidden at close range. But when you see it you really see it! Whilst standing beneath this quirky vision you are compelled to stand back, in fact to cross the road, to view it in its entirety. Instantly you see a piece of architecture turned on its side, squeezed between two buildings and set back from the street. It’s a small Korean domestic building made of authentic stone, wood and slate but its power emanates from the fact that it is tilted and wedged into an angled position. Its slanted attitude conveys a sense of accident or a calamitous fall earthward from the sky.

Do Ho Suh has literally and physically transported a piece of Korea into a Northern English City. The Korean style house is a reconstruction or replica of a home from a past era, a distant memory. It’s an alien structure which brings its own weight of history and cultural development into a collision course with another culture. The obvious distinction of this little foreign invader of an artwork from the neighbouring buildings plays hide and seek with the viewer since, once we notice it, we wonder how we could ever have been blind to its presence! How it contrasts with its surrounding environment, its size and style juxtaposed against ‘our’ industrial past, warehouses from the golden age of Liverpool port history. This small Korean dwelling is, all at once, out of place, out of time and, even more noticeably, out of kilter! Reminiscent of a game of Tetris it is animated purely in your imagination. As a viewer you want the artwork to right itself and drop into an accurate tight fit alongside its neighbouring buildings and so you visually correct its faulty placement. But the tilt of the house is locked in to this static position; it will never fit in.

On the ground below the work is a double painted black wooden garage door. On top of these doors is a looping barrier of barbed wire. This is not directly part of the work but becomes a consideration when viewed as a site specific piece. It brings a sense of hostility, an unwelcoming fence which says ‘keep out’. It’s a factor in the work and it creates another level of reasoning and questioning.

The bridging aspect of two cultures is not fully transparent; it’s more a fusion, a synthesis or grafting of two diverse cultures. Dealing with nostalgia and memory the building is from the past, it’s been transported geographically as much as through time and imagination. In many ways it holds a loss of personal identity and is crowded out by its superior mass invested neighbours. The highlighting of the ‘in between’ space and the lack of individual personal space in a cramped city maybe makes you aware of other empty, physical spaces within the city. The piece can be seen as representing the migrant, occupying areas and voids in the city, weaving and evolving amongst the native population. It is the unknown, the unfamiliar and apprehensive to our eyes.

It is often said that, in the city, the only people who look up are tourists. This work produces a viral effect on the crowd. Once Do Ho Suh’s house is discovered groups of people gather and view the artwork. The casual passers- by notice and in turn become curious; they then scrutinise the artwork which makes others curious and so on…