Documenta14 - On being a guest, my visit to Kassel - a-n The Artists Information Company 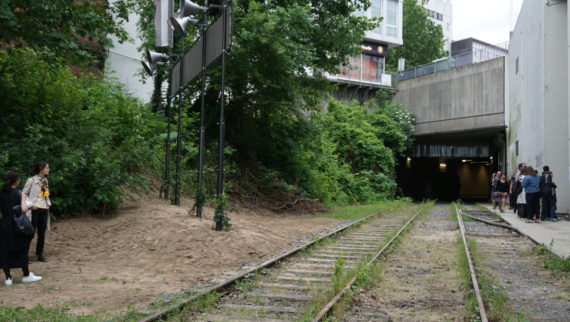 There is a strong interplay running through the whole of Documenta14, with its different locations, and various strands of migration, social realism, displacement, anthropology and indigenous cultures. The more time I spent there the more I appreciated the curation across the whole festival with each location and exhibition intersecting with each other. There are some incredible spaces opened up as part of Documenta14, such as the old post office depot (Neue Neue Galerie), and the former underground station accessible through a container in front of the main station (Kultur Bahnhof) as well as exhibitions curated within existing exhibition spaces such as Palais Bellevue, a star show for me.

Running through all the exhibitions is a thread relating inevitably around its two locations of Athens and Kassel, to immigration, to the ‘so-called’ refugee crisis and to displacement. In addition to this, for me being in Kassel at the time of the UK general election, and with Brexit looming large, this only added, ever more so, to the debate around borders, identity, of being defined (unfortunately) by one’s place of origin, which many of the works at Documenta I felt often reverberated around.

On first arriving into Kassel I was immediately drawn to Hiwa K’s installation When We Were Exhaling Images, Friedrichsplatz, Kassel. Hiwa K is an Iraq born artist living in Berlin whose work reflected upon displacement. For me it represented the human need to make a home wherever one might be, on the way to one’s destination, and of the journeys inbetween. A series of clay pipes sitting housed in front of Documenta Halle, with various furniture, books, and plants contained in each. Each pipe a different home, a home that one tries to make wherever one goes.

Situated at one of the Glass Pavilions on Kurt Schumacher Strasse, (housed in a row of disused shops in an immigrant area of Kassel), is the installation by Mounira Al Solh, Nassib’s Bakery. Initially unsure about what this space was, a working cafe or artspace, I later became very struck by this installation. Beirut born, Lebanese-Dutch artist, Mounira Al Solh creates a stark depiction through this installation, of ’Nassib’s Bakery‘ as a means for survival during civil war with her description of the physicality of making bread, of sourcing flour, to its eventual bombing and burning down. Handwritten directly onto the wall she conveys so vividly yet starkly, the knife-edge of existence in such a beautiful, raw, poetic way that its difficult to not be transfixed by it.

Zafos Xagoraris, The Welcoming Gate, KulturBahnhof
Translating as ‘hello’ this welcome gate and sound installation draws upon a moment in Greece’s history (1916) when 7,000 Greek soldiers surrendered to German forces, and became both guests and prisoners in Gorlitz, Germany for three years. Installed in the amazing disused underground station of KulturBahnhof it serves as a welcome arrival to a city, as well as resonates with me on a common and important strand to this festival, around the defining of the ‘guest’, and of a human instinct to ‘welcome’ – a theme which I find also carefully reflected in the film at Bali-Kinos: ‘An Opera of the World, 2017, Portugal/USA/Mali, 71 min. Director: Manthia Diawara. Based on a libretto by the Chadian poet and playwright Koulsy Lamko, Bintou Were, a Sahel Opera depicts the struggles of a young woman, pregnant after several rapes, not clear on who is the father. Hoping to leave her homeland for a better future, she meets a people smuggler with whom she embarks on the journey north. An Opera of the World interlaces documentation of the opera with historical footage of migration and interviews, creating a story of migrations. Four public intellectuals who are friends of the artist discuss the human instinct of welcoming a guest to one’s country: Fatou Diome, Alexander Kluge, Nicole Lapierre and Richard Sennett. It’s a very human and reflective portrayal on the complexities of migration.

The political and social context to a lot of the works at Documenta means there’s a lot to read. There are many different forms of literature. Catalogues, leaflets, flyers, newspapers etc. It seems to take some time to work out which is the best tactic for deciding where to go first. There’s a sense you are missing things, whilst you sit reading all the literature before deciding where to visit, what to see. The maps aren’t very detailed and I got lost many times, on the way to things. I enjoyed the possible intentionality of this, arriving at locations like somehow the walk there had enabled me to add necessary context to the work which I otherwise would not have had. I enjoyed this level of physicality of engagement with the festival, whilst at the same time engaging with the place, the city, the location.

Artist & curator based in Edinburgh. Rosy set up Art Walk Projects in 2016 developing projects that engage with the local environment in and around Portobello, Edinburgh's seaside.