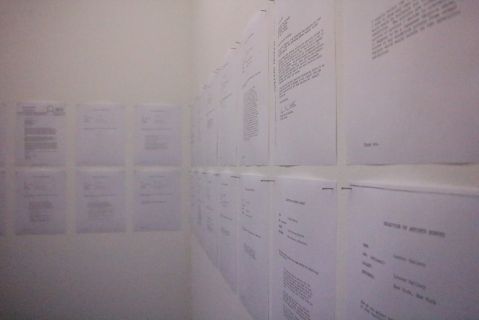 A Mass Observation of the art world

Curator Sacha Waldron has brought the work of American conceptual artist Don Celender to the UK in Surveyed, a two-part exhibition of his call and response survey mailouts – the second exhibition of this show opened at CRATE, Margate on 20th June and runs until 11th August.

The exhibition echoes the original display of Celender’s surveys – the survey question with is attributed response, as the artist termed it, a ‘Conceptual Documentation’. Six surveys are shown, ranging from the first survey, Art Movements (1969-70) to Ignored and Neglected Artist Survey Part 2 (2001). As one moves through the exhibition, one moves deeper and deeper into depth of thought and the archive itself. This is a forensic investigation, line upon line of surveys, line upon line of responses.

The work is the artist talking to other artists, asking questions of their work and its value, their opinion on the art world and how they see themselves and others in it. Questions too are asked for those that run the art world of that time, the art dealers, dematerialising their selection process and giving insight into their interior world. The questions asked – such as ‘How do you select artists?’, ‘Who do you think is the most ignored artist?’ – are pertinent to the sector we work in today; it questions the value we place on work and how we make those value assumptions.

Some responses are vain, many are humorous, some are flippant or pragmatic, some rambling and philosophical. All though are exposing of the art world and its workings. The responses are hand-written or typed – in today’s world of quick online surveys, click boxes and comment boxes limited by character number, the responses here are a visual remembrance of an analogue time. For an art sector currently enamoured by data, Surveyed is an antidote to the digitalisation and artistic conceptualisation of data, and not lacking for it. Visiting Margate that day, I of course took the opportunity to visit the Turner Contemporary. Its current show is Curiosity: Art and the Pleasures of Knowing; it too investigates the collection and dissemination of knowledge and is an apt companion to Surveyed.

The result of a fastidious mind, the narrow questions of the surveys elicit a wide response. A favourite and an example of the battle of wits that some responders replied in the spirit of is from the Cleveland Museum of Art; when asked, in Art Movements, to collect 1000 artefacts from its permanent collection and place in a weather balloon, its Director replied ‘as art is in the mind of the beholder…rigorous use of my imagination, I can report that the mission has been accomplished’.

Curator, Sacha Waldron, comments: ‘With the CRATE show this seemed an opportunity to do something akin to the way Celender would have shown his work. I am invigilating it so I can go into further details with people in the space myself. Celender was always present at his New York shows and very visible so at CRATE it’s personal in a similar way.’

Sacha continues: ‘Both the exhibitions start with The Ignored and Neglected Artists Survey, which is important. This is how I viewed Celender himself – not that he thought this necessarily – but how I approached my initial research. Celender does not need to be re-argued as a major player in this scene but should be re-emphasised as a player within the New York conceptual art structures.’

Surveyed equalises the art world to the common denominator of the same question asked of all. The responses through give rich, layered insight not just to the art world of its time, but of the art sector we live and work in now and is a valuable Mass Observation archive of who we are and what we do as artists.