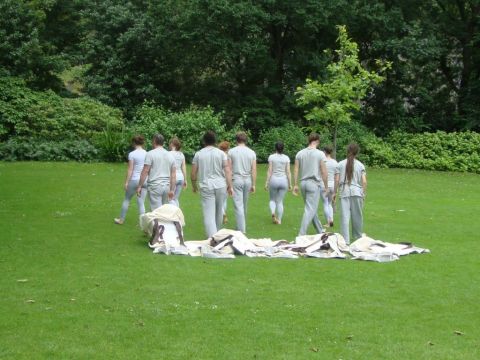 Notions and nuances of duration, arrangement, architecture, pace and theatre interweave in artist Emily Speed’s commissioned performance, Human Castle, for the opening of Edinburgh Art Festival 2012. In this new work a slow paced gathering forming a cast of gymnast/walker/athlete/performer/builder appear, establishing a footprint, a stage and a series of performative actions, gestures and intersections, emulating the processes of a master builder under the shadows of the mass and bulk of the Royal, prison, palace and military edifice Edinburgh Castle they are about to, in Sisyphean futility, imitate.

In the performance notes for the piece Speed alludes to concrete poetry, employed here, reiterating this human, vulnerably scaled gesture, with its transient, slight choreographed connections, its precarious contingencies of, and held in, balance, weight, pressure, failure, drop, of the processes at hand. Her performers in unspoken mime, like a detailed ballet of sense and physicality, collude to create geometries and gestures of flight, construct and disintegration, which alludes considerably to the theatre dance art of German artist Oskar Schlemmer, and to the city’s festival season, an en masse abundance of performing arts, live moments and creative alluring congregations.

Meanwhile an architecture she does solidly bridge, between the dense built environment of her Castle backdrop, these elegantly arranged rich gardens, its performed ‘fabrication’ and its audience reveal an interesting hierarchy of status and presence. That even in this open air, ‘free’ space, a kind of pecking order of a very human ego-driven nature surface.

Eventually though Speed’s Castle is built, and for a moment sits solidly, defiantly on these young shoulders: “All Greatness Stands Firm in The Storm”, before collapsing, abandoning, dispersing. The work is brief, feels awkward, but effective, and sets up an engaging enquiry into the human role, exchanges and activities in environments of power signs, value surfaces, controlled traditions, legacy and authority.