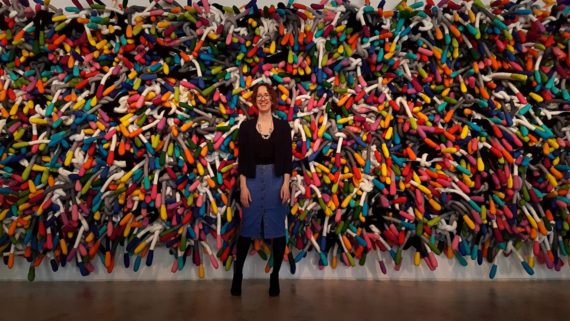 Turner Contemporary’s new exhibition Entangled is an exhibition with scale – in places it’s big and bold, but there’s lots of fine grain to explore.

The show includes work by forty women artists from around the world. What started as a textile show became expanded to include work with a sense of textiles. ‘It’s a loose interpretation of threads. A jigsaw.’ says curator Karen Wright.

This exhibition has pushed artists to make new work, sometimes in different ways – and what’s on show is not always their usual work.

‘There are so many new ideas and thoughts in this show’ explains Turner Contemporary’s director Victoria Pomery, ‘and these exceptional new works mean creativity, innovation, taking risks, and making are at the heart of this show.’

As always with a Turner Contemporary show, the exhibition is itself an event. While this usually starts with work on Turner’s balcony, where huge windows open the gallery to views across the North Sea, Entangled starts earlier. For the first time, the gallery’s vast lift (designed to carry large works to the first floor spaces) is an exhibition space. Samara Scott’s installation wraps around the walls of the lift – and while the scale is impressive,  the work is somewhat less so. Using carpet, food colouring and yoghurt, it’s a jumbled composition of appliqued shapes, forms and colours.

Outside the lift, though, the work gets better.

The exhibition proper opens with Anna Ray’s Margate Knot – a vast form resembling a psychedelic sea anemone inspired by pick-up sticks, underwired bras and the colours of Margate. Ray worked with twenty local assistants, all producing elements on their home sewing machines. Paid £5 per piece for producing 100 pieces used in the final work, this perhaps (it’s not made clear) remembers the exploitation and employment law violations that are widespread in the UK textile industry – perhaps rather ironically, in a show which Pomery says marks the invisible histories of women artists.

Interestingly, Phyllida Barlow’s work ‘Untitled brokenshelf2015’ plays with a similar colour palette. Her work though is made from timber, ply, cement, steel and fabric. Tough, hard and using waste materials, in a town where regeneration hasn’t reached every corner yet, it’s a very Margate sculpture. 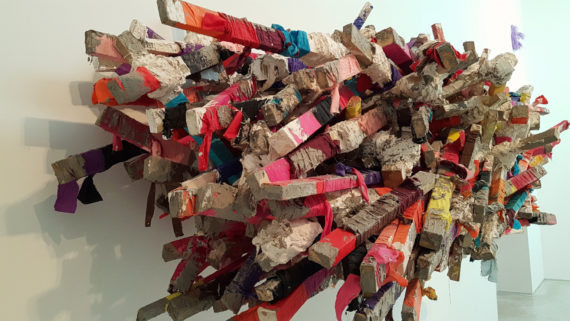 Maureen Hodge’s ‘Flying Home To Arkadia’ is similarly tough, although this time it’s a tapestry using Turksih and Persian knotting. It’s lush looseness is made even stronger by hanging it next to the buttoned-down modernism of Anni Albers’ ‘Gunta Stolzl’, a neat modernist grid of black, grey, yellow and white forms designed in 1926 but only made in 1967. This push-and-pull between works happens throughout Entangled, and it gives the exhibition a strong rhythm. 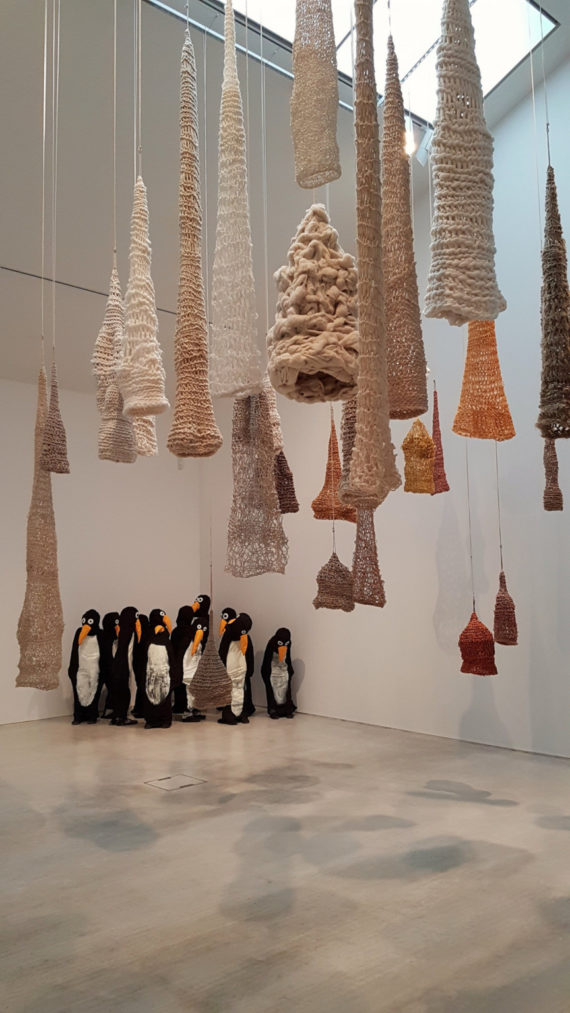 Penguins by Laura Ford – a collection of ‘Sculptures dressed as people dressed as animals’ – huddle in a corner of a room dominated by vast hanging forms, like macrame plant hangers from a 1970s primary school lesson on acid. In another room, a delicate and ephereal horse-hair installation reaching from concrete floor to Turner’s high ceiling contrasts the solid sexuality of Kiki Smith’s  jacquard loom tapestry Sky. 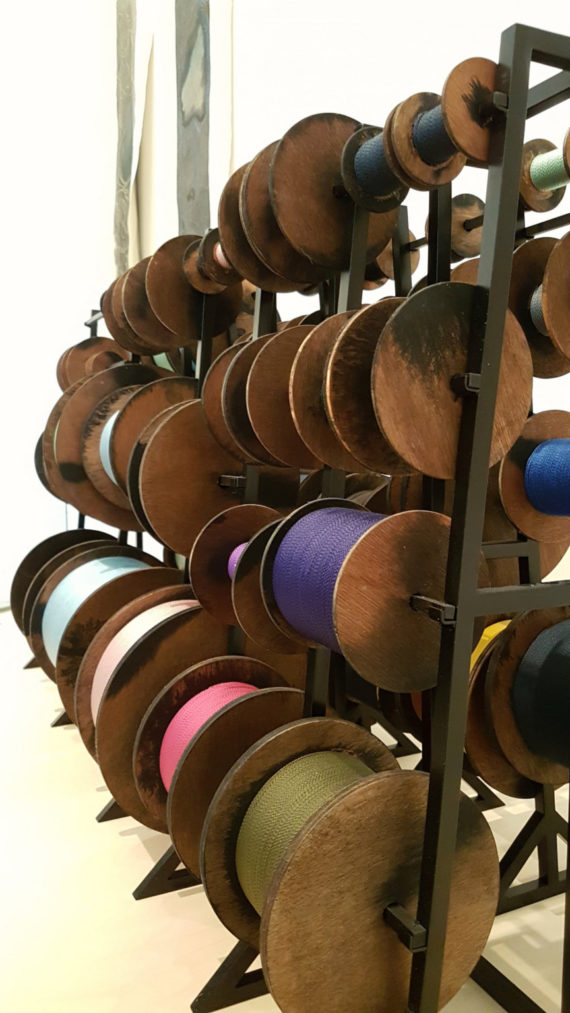 And while some of the work is a just a sheer delight because of the skill in the craft, the best works really are those that connect to place. While Ray and Barlow connect to Margate, a cerebral standout is Desire Lines by Tatiana Trouvè. 212 coloured ropes wound onto reels and displayed on racks each represent the length of a path in Central Park, New York. Thread here is used as memory of walking.

Susan Hiller’s experimental works incorporate her earlier paintings; in one work, she unravelled a whole canvas. Here, ‘Painting Blocks’ are recycled canvases cut up and sewn together to form sculptural blocks. Physical objects, they are the memory of past work.

Threads are used to record memory; think how many metaphors about the mind reference sewing. We’ve lost the thread, become unravelled. He’s not the sharpest needle. She’s wound too tight.

We spin a yarn. The President embroiders the truth.

And perhaps, that’s where the real power comes from in this show. I own an exquisite quilt, made for me and my wife by my nan. Started in October 2010, she finished it in July 2011. It used 1125 yards of quilting thread, and every stitch is made by her hand. Her love and hopes are in the stitching.

Entangled set out to be a show about women artists; but perhaps it’s really about memory, and how women are custodians of collective history.