Fatescapes at From Here On - a-n The Artists Information Company 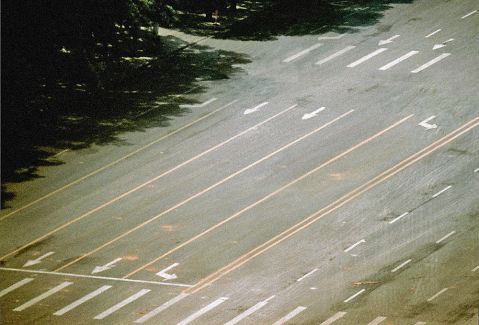 Firstly to describe Pavel Maria Smejkal’s Fatescapes, currently being exhibited at From Here On, Les Recontres D’Arles: this is a series of iconic historical photographs but with the key subject matter, the characters in action, removed. In other words only the background remains but as the catalogue bumph for the exhibition states “despite this, the images are nearly all recognisable”.

Rather than ponder about why the empty images remain identifiable it is more interesting to try and deal with what has been created. The facts of memory, knowledge and history remain a problem. The human tendency to try and make sense of things, and quickly, is another. In this case by the way there are controversies and stories surrounding all the originals so it is ironic indeed that we have a problem forgetting subject matter which may have been staged in the first place and certainly does not necessarily represent the kind of truth most assume.

Generally though questions are raised about how to ignore context, to really be naive, to forget what we know? A school of thought suggests that to be the stranger in a place is advantageous, at least for artists. Students learning to draw from observation were, in what appears contradictory, taught not to think (about faces say or the figure or meaning). And regardless of whether the tradition continues this kind of interest in truth (which as we say, somewhat paradoxically, requires disinterest) does appear fundamental to what artists do. It takes a peculiar kind of effort to see what is in front of your own eyes. Smejkal’s creations (or his finds?) are provocative in that respect: this is intelligent art about the difficulty of being stupid.

Writer Nigel Thrift is not alone in valuing “the lived immediacy of actual experience, before any reflection on it”. However can I begin to look at Robert Capa’s famous Death of a Loyalist Soldier or for that matter Smejjkal’s new version of it minus the falling soldier, entitled (accurately) Spain, 1936 and see only formal elements, a composition, the abstract qualities for example? The answer: with the latter, yes, it is easier to escape knowledge. It is at least possible to begin to take the picture for what it is, a picture, and notice the assembly of stretched triangles, other shapes and patterns. At the same time the ghost of the character remains. At the same time the original beautiful lie or bit of heritage seeps through.

There are other sets of images at From Here On which have a similar impact in some respects, for example Jon Haddock’s stills taken from porn movies at those (presumably rare) moments when the central characters are out of frame. The difference is that the Fatescape series appears to be saying something about quality too. Typically in the world ‘craft skills’ are lauded. Unfortunately what is usually being referred to, is a set of conventions, a list of traditional crafts only. And contrary to popular opinion (or at least the ideas sometimes promoted in the media) for most contemporary artists craft is also a crucial factor, even when the aim is to get beyond it, or ignore it. The skill involved is not necessarily with an SLR camera, controlling depth of field or with oil paint (the new technology of a few hundred years ago). Often the really interesting stuff happens when an artist doesn’t feel the need to show off as has been suggested, or may want to subvert their craft. Smejkal appears to be playing with these questions too. In reality whether he has modified existing images meticulously, searched cleverly for pictures that require little (or no) manipulation in the first place or combined both approaches is irrelevant. If we include the selecting process, the ability to hone intentions and then carry something through so that justice is done to a concept, then these are motivations and skills most do not possess. Effort, or the issue of effort, does appear palpable in the Fatescapes.

Of course we can only say these things because we know the original photographs. So the somewhat ridiculous question still remains, as it does with much photography, what would these images be like if that history and context was not available to us? Primarily the effect of the series is to draw attention again to the originals and their meaning. A few hundred words only begin to grapple with all that is significant here. Other points can be made: could raw material from more recent history be used for example? Enough time has passed since all of these photographs first emerged to permit a less emotional response. The famous Abu Graib pictures might be less suitable. But perhaps that is part of the point: by lightening the meaning a new poignancy can be generated.