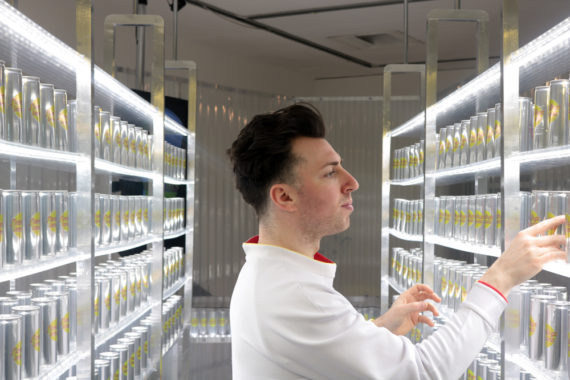 It is a ripe time to be adding some reflection to Ross Fleming’s show Flemings Lemons, which saw premature closer on Wednesday 18 March 2020 due to CCA Glasgow taking precautionary action for social distancing, thanks to COVID-19.

Writing this is even more ripe as I self-isolate in my living room – thankfully with a big bay window to look out of, down onto the street, observing joggers jog once a day and then walk back along the road as its their first time jogging.

Exhausted, they could do with some fizzy pop laced with Pre-Exposure ingredients to stop the spread of an air-born virus. If it were a constant resource, Flemings Lemons would be the perfect watering hole of enlightenment and replenishment. 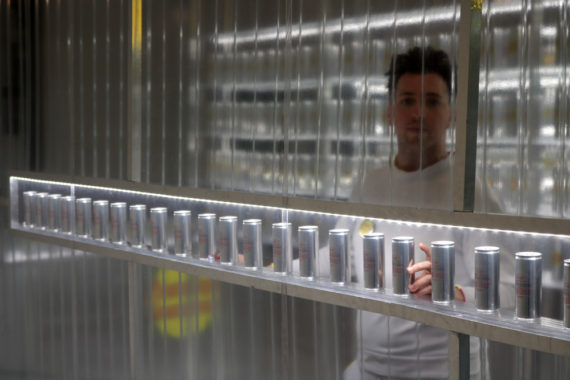 The exhibition’s focus as a participatory installation, or shop exclusively stocking a ‘fantasy lemonade elixir infused with PrEP’, touched, with zest, on a comparison between the lives of Gaëtan Dugas – a Canadian flight attendant mistakenly named “Patient O” by Centers for Disease Control and Prevention (CDC), during a study in March 1984 that tracked sexual liaisons and practices of gay and bisexual men in California and New York during the AIDs crisis – and Daryll Rowe, who, in April 2018, became the first person to be jailed for deliberately infecting men with HIV in the UK. 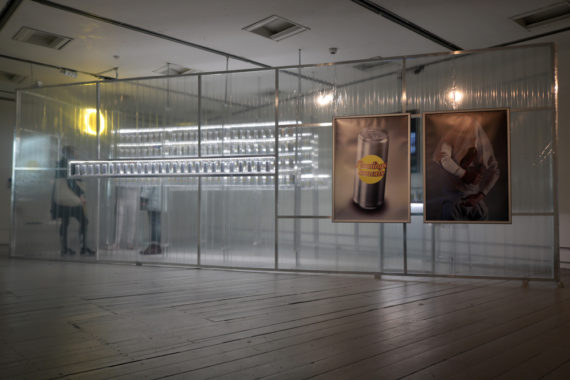 As well as a shop Flemings Lemons was a product-cum-shack, with graffiti and used condoms at the back, created to ‘illustrate contemporary attitudes to consumption and protection’.

Many would think today’s generation of gay men have little room to comment on the AIDs crisis of the 80s; how we are able to protect ourselves now and how they were unable to protect themselves then.

Yet the current global crisis that is COVID-19 is rapidly placing each and every one of us in a similar position. And the production of PrEP, along with its consumption – at no small cost I might add – sees many gay and bisexual men who lived through the AIDs crisis embrace hedonism yet again, taking less precaution than is advised and putting new generations at greater risk still. There are more viruses and diseases out there, PrEP only deals with one of them. 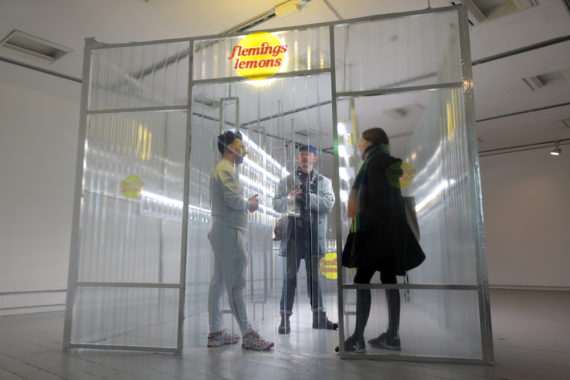 If only Flemings Lemons was still open! Temporarily, it did become a safe place for discussion – almost a pharmacy of reassurance. Yet visitors began to feel dangerous entering the public space due to awareness of social distancing. So, as smaller and smaller groups attended the scenario became more like an upmarket store – something you might find in Duty Free. A place where you might come across other travellers with enough money and freedom to be travelling. Or perhaps some people who are just simply stranded in-between global borders.

In physical terms the artist built an impressive enclosure out of plastic, fitted to a wooden frame, which was then treated with silver laminate for a glossy and reflective posh look.

The posh look was enhanced by bright LEDs in the form of Flemings Lemons signage. The interior of the structure shelved hundreds of cans produced by the artist (and his aunts!), all containing PrEP along with lemonade and flavour enhancer (and some tongue-in-cheek artist’s own piss). 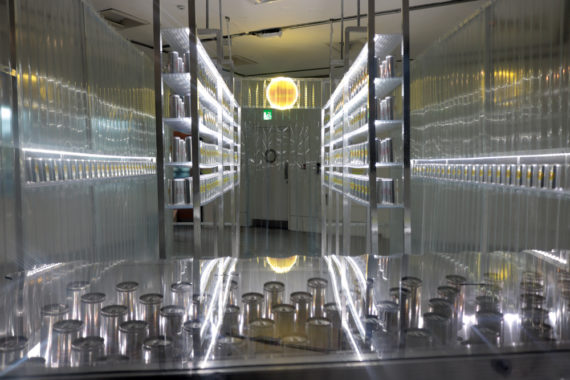 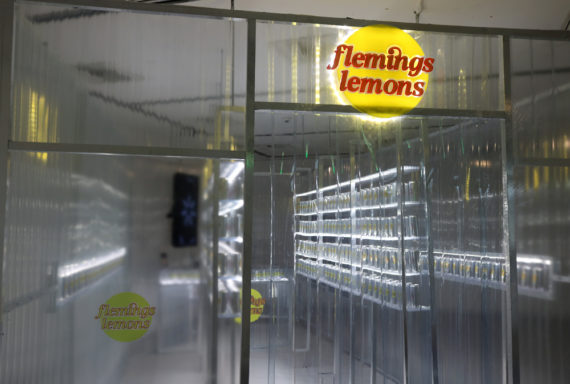 The taste was something like a druggy feel. Noxious you might say but only because of placebo. Floaty, you could say, just like the look of the shelves and cans when observing from the outside.

Just as Daryll Rowe was explicitly predatory in his behaviour, the artist was determinately the absolute opposite. This came down to the exquisitely impartial costume he made for himself, replicas of which were also fashioned for other flight-attendant-style volunteers light on their feet.

All were on show during the exhibition’s private view. The garb was also a billboard photograph sharing similarity with press images of Daryll Rowe cloaked in a hoody, upon being given his life sentence.

You had to look closer to appreciate the trimmings of the clothing and this required intimacy. The sort of intimacy you briefly get when an Easy Jet employee hands you a scratch card during a one-hour flight from Glasgow to Cardiff. 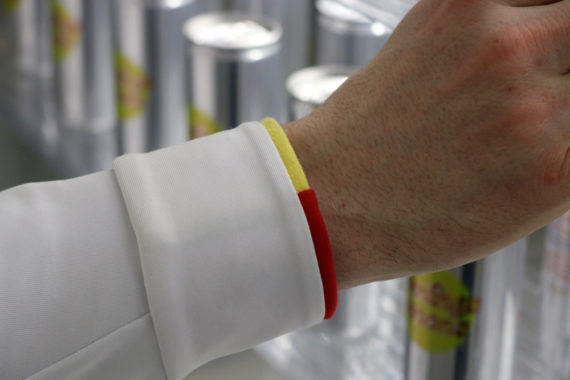 To enter the exhibition was to be greeted by Ross, his resounding West Renfrewshire accent enveloping reassurance. To enter further was to be given one of those branded goodie bags mentioned above – branded condoms, branded drinks cans, branded badges for extra branding (two sizes no less).

You could volunteer some coin in response, all proceedings for the Terrence Higgins Trust, a British charity that ‘campaigns on and provides services relating to HIV and sexual health’.

The welcoming feel also came from a playlist put together by the artist. Hits from the charts in March 1984, when CDC conducted its study and also the month of Gaëtan Dugas’s death. Songs we all know but mostly only have the capacity to boogie to (in our living rooms by ourselves).

Songs I have memories of, played on repeat for Millennials attending Eighties club nights, wearing rucksacks filled with free water taken from pubs that also provide complementary condoms and lube.

Such clubs also have men with mullets – bulkier and more robust versions of Gaëtan Dugas who wear moustaches to complete the look.

In a way this exhibition was a cleansing of an intoxicating clash between the likes of hedonism in gay culture four decades ago, and the online sadistic behaviour predatorily thrown about today.

To think globally, this combination could potentially include a sort of Californian but self-tanned instead carefree attitude set within heavy curds of half-made British cheese we all want a taste of before its safe to try. Flemings Lemons being the only antidote.

In the mix, right in the loop of that playlist, was a series of comments on what all of this means to us today. And much of this comment happened thanks to the artist’s constant presence and chat. Some might say he was a performer. Others might say an aggravator. All of us now rendered consumers of protection.

Flemings Lemons was open from Friday 6 March 2020 and subsequently closed on Wednesday 18 March 20120, due to public safety and UK Government guidelines surrounding COVID-19. 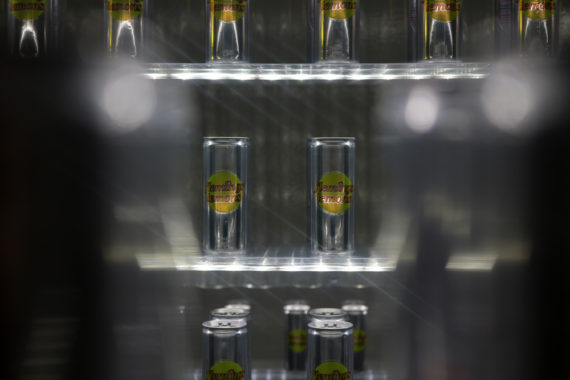